Aldana has knack for show-stealing performances 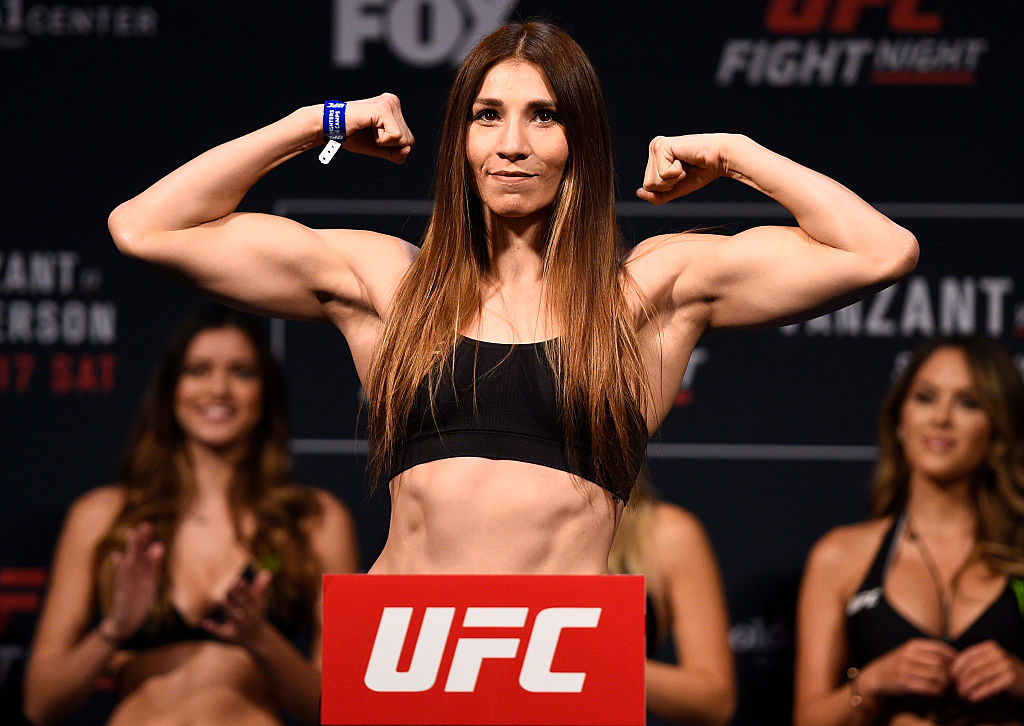 With a dedication few others have, the Mexican culture celebrates the art of the prizefight. No matter what the rules are, if there’s a fight in Mexico, there will be a packed house living and dying with every blow. That’s unless someone’s daughter is fighting. Then, there’s not as much celebration.

Irene Aldana knows this firsthand, as she put her career in graphic design to the side to become a mixed martial artist, much to the initial chagrin of her mother.

“She saw the fights and there was blood and she was scared,” Aldana laughs. “She said, ‘No, you can be a photographer, you can be a designer, you can get married. Why do you want to do this? It’s so scary and dangerous.’ But I loved it and I didn’t let her have a voice in that. I just didn’t care. I kept training.”

Today, Aldana isn’t just any mixed martial artist. She’s a UFC bantamweight coming off a Fight of the Night bonus in her first Octagon bout and in search of another one when she faces Katlyn Chookagian at UFC 210 on Apr. 8. And oddly enough, her biggest fans are now her parents.

“They are the number one fans of MMA, and not just me,” Aldana said. “They know the submission names and they never miss a UFC event. They love it.”

Well, family ties aside, the 28-year-old does have a style that can turn anyone into an MMA fan, and as far as Aldana is concerned, that willingness to put it all on the line in every fight is in the blood.

“A Mexican fighter is someone who gives their all, who is a warrior,” she said. “We go to war and push forward and don’t give up. If we get punched, that feeds us, it makes us wake up and keep pushing forward and answer back. It’s in our heart and in our blood.”

Her record proves it. In five bouts for Invicta FC, Aldana won four of them, all by knockout or submission, with three wins earning Performance of the Night honors. Needless to say, she was a natural to make the move to the UFC, and while she lost her December debut to Leslie Smith, she picked up a Fight of the Night bonus and plenty of fans. And despite the defeat, she loved every minute of it.

“I really had fun in that fight,” she said. “I was nervous and I lost a little focus because I was so excited to be in there. I was looking at my name on the screen, I was looking at (Bruce) Buffer, I was looking all around and I suddenly forgot that I’ve got somebody in front of me that I was going to fight. (Laughs) But when the fight started, I was just having so much fun and I was glad that it was Fight of the Night. I gave my hundred percent and I gave an amazing fight that people enjoyed. I fought a veteran, which is not an easy thing. She was so experienced and familiar with the stage, and for me it was all new. But I’m glad with what I did and I hope I can make it better this time.”

A lot of people are expecting the same type of fight against fellow 135-pound prospect Chookagian. Both favor the standup game, have busy styles, and they enjoy the heat of the battle. And even on a card with a lot of big names, Aldana and Chookagian will be bonus hunting in Buffalo.

“There’s Fight of the Night potential with this fight,” Aldana said. “We are both strikers, she is as hungry as I am, she has good technique and I think she’s a great fighter and she’s going to give her hundred percent during this fight. So I hope we get a bonus.”

That kind of attitude goes way beyond wins and losses. And again, it goes back to her Mexican combat sports roots. Boxing is full of fighters who may not have had the most sparkling records, but once they got in the ring, they could give anyone fits while thrilling their diehard fans with performances that made the end result irrelevant. Aldana wants to win as much as any fighter, but how she fights is just as important. And in Mexico, people are beginning to pay attention to fighters like Aldana and her teammate, fellow UFC fighter Alexa Grasso.

“It’s starting to get there,” she said. “Women’s MMA in Mexico is really new. Actually, we could just have only three fights in Mexico because there wasn’t a lot of competition here. And then we went to Invicta and the UFC. So the sport is just getting known in Mexico and it’s getting accepted and becoming a big deal here. More women are interested to go train and see what it’s about. But when we started, it wasn’t that known. People looked at us weird. (Laughs) But we told them, ‘We are girls who just like combat sports.’ So in the beginning it was a little hard, but now it’s more accepted.”

And ten or twenty years from now, a new generation of Mexican fighters will talk about how they watched Irene Aldana and were inspired to fight. That’s a cool perk for Aldana, but for now, the coolest benefit she’s looking forward to is meeting Chookagian in the Octagon a week from Saturday.

“Knowing I have an opponent of this level makes me train harder and makes me a better fighter,” she said. “It’s exciting to fight someone who is always coming forward. I like the K-1 kind of fights because there’s always punching and getting punched. There’s no time off and I think it’s going to be that kind of fight. We’re not going to stop.”