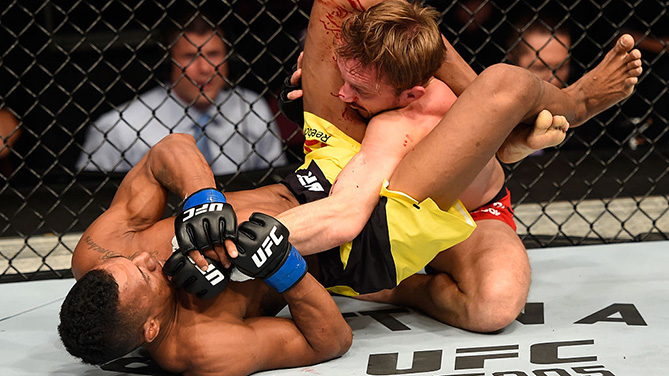 Brazilian bantamweight veteran Iuri Alcantara delivered the most impressive two minutes of his UFC career in UFC 204 prelim action at Manchester Arena on Saturday night, showing off his entire MMA game en route to a first-round submission of Brad Pickett.

Alcantara struck first with a knee in the opening minute, and a crushing spinning back elbow dropped Pickett in the second minute of the frame. Alcantara went in for the finish and landed several hard shots. After Pickett shook off those blows, Alcantara adjusted and went after the submission and he got it, as sunk in a triangle choke that ended the bout 1:59 into the fight. 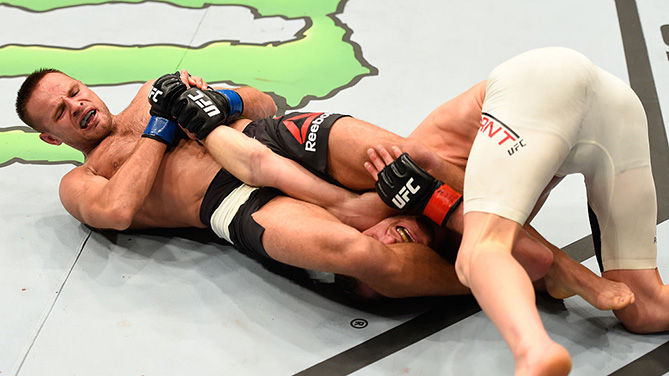 Damian Stasiak made it two straight in the Octagon in bantamweight action, as he submitted Davey Grant in the third round.

The opening round was competitive throughout, with Stasiak possibly edging Grant, which prompted “Dangerous” Davey to go on the attack with his standup game. Mixing things up nicely with punches, kicks and knees, Grant froze Stasiak with his strikes. With a little over two minutes left, Stasiak halted his foe’s momentum with a takedown, but Grant shot right back to his feet and got back to business. Another Stasiak takedown followed, and this time he got the mount, but Grant eluded danger by the end of the round.

The two bantamweights continued to battle in the third round, but eventually, Stasiak broke the fight wide open, locking in a tight armbar. Grant courageously tried to escape, but to no avail, as he was forced to tap out at the 3:56 mark. 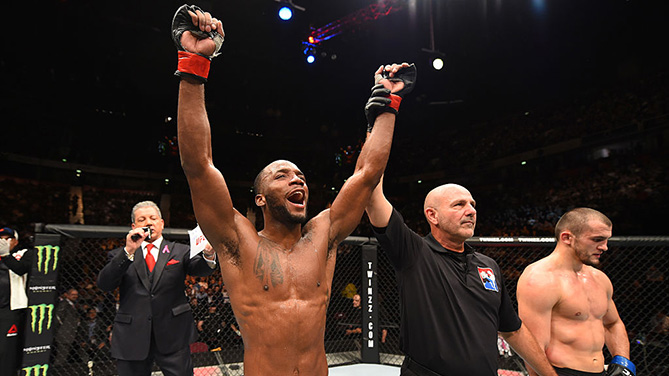 Birmingham’s Leon Edwards thrilled the British crowd as he secured the biggest win of his UFC career, submitting No. 14-ranked welterweight Albert Tumenov in the third round.

Edwards mixed up his game well in the first round, using his striking and ground attack to keep Tumenov guessing. Edwards’ transition game was solid as well, and while Tumenov would get back to his feet with under two minutes left, “Rocky” kept him locked up and grounded him again.

Tumenov evened the fight up in the second with a determined effort to keep the fight standing, which he accomplished as Edwards tired.

After more standup control from Tumenov in the final frame, Edwards got the takedown once more, and he took the fight out of the judges’ hands, taking Tumenov’s back and forcing him to tap out to a rear naked choke at 3:01 of the third. 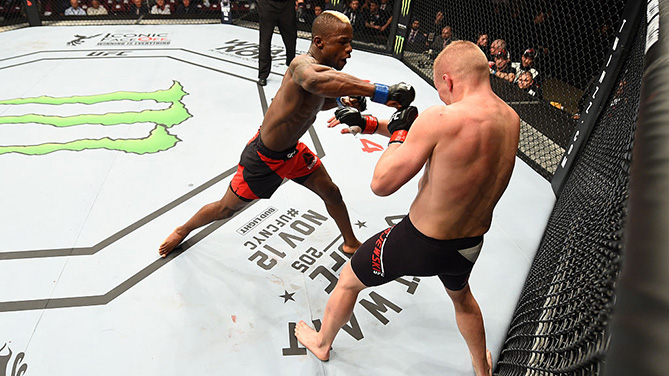 Manchester lightweight Marc Diakiese made an impressive first start in the Octagon, with the rising star stopping Lukasz Sajewski in second round.

Diakiese rushed Sajewski at the start of the fight, but that allowed the Polish prospect to take his foe down and land in side control. Midway through the round though, Diakiese found his way to his feet and immediately got the crowd into the action with a thudding slam and some follow up strikes. Sajewski recovered quickly and took Diakiese back down, but the Brit was back on his feet by round’s end.

In the second, Diakiese avoided being taken down, and with that threat averted, the 23-year-old began picking Sajewski apart with his strikes. From there, it was just a matter of time, and after landing a steady barrage of strikes while Sajewski was pinned to the fence, referee Leon Roberts stepped in and halted the fight at the 4:40 mark.

Diakiese improves to 10-0; Gdansk’s Sajewski, who stepped in on short notice for the injured Reza Madadi, falls to 13-3.