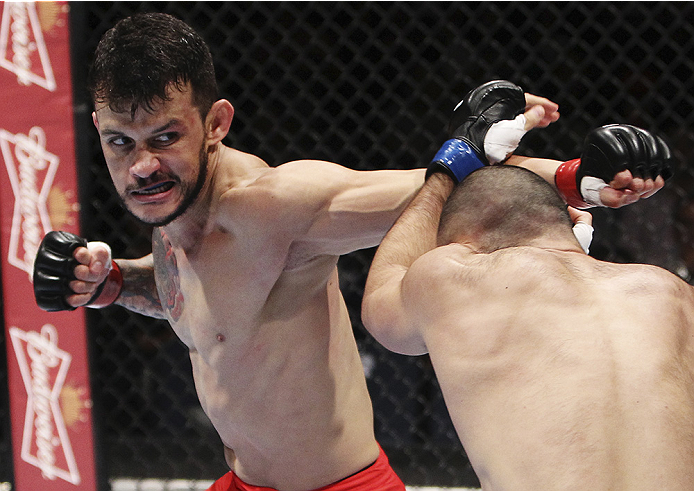 Of the 32 countries Alberto Mina has set foot in as native, visitor, fighter or coach, South Korea may be the most important, as the Brazilian comes to a crossroads in his career that forces him to step on the gas pedal if he wants to reach that elusive goal of becoming a world champion in the UFC.

“To be very honest, I’m 33 already, so this has to happen right now,” Mina, who faces Yoshihiro Akiyama in a UFC Fight Night bout in Seoul on Saturday, said. “I’m not the young guy anymore, so I believe 2016 is gonna be a big year for me, for sure.”

It always bears a chuckle or two when you hear someone likely in their physical prime and with little wear and tear from a career spanning just 11 pro fights feeling that 33 is like closing in on 50, but at the same time you have to appreciate the unbeaten Mina’s attitude and his urgency in wanting to make a run at the 170-pound title. And frankly, his reasoning makes a lot of sense.

“If we start to think about the welterweight division, you see that guys like Matt Brown, who had seven wins in a row, didn’t even take the title,” Mina said. “So I don’t know the parameters they’re going to use for the run to a title shot, but I would probably have to get super tough guys in my next three fights and then try to do something. Otherwise I’m going to be a bit late. So I really have to rush, really have to get the big names and then see.”

Relegated to just one UFC fight thus far, and with that fight – a first-round TKO of Shinsho Anzai – coming in August of 2014, Mina’s desire to kick things into gear is understandable, and he gets his first big name this weekend in Akiyama.

“I’m a big fan of Japanese fights in general and the fighters’ spirit, and I’ve been watching Akiyama even before he started fighting in the UFC,” he said. “So when the fight was announced, I was very excited for the opportunity, and I believe it’s going to be the perfect fight for me. The guy is super experienced and he has a huge name.”

But while Mina is respectful of his foe, he’s not in awe of him, so he expects to not just get his 12th victory without a defeat, but his 12th finish as well. See, the “Soldier of God” has never heard the final bell as a pro, winning six fights by submission and five by knockout. Nine of those bouts never got out of the first round. So why is he still under the radar? A mix of promotional issues outside of the UFC and the usual starts and stops of the fight game have conspired against the affable Campina Grande native, and it’s been frustrating, to say the least.

“If you’ve followed my career, I’ve had so many stops,” he said. “A lot of things stopped my career, and even sometimes stopped my mood too. I always had to press the restart button all the time, but now I really believe I’m going to be able to fight at least three times per year and that’s my goal.”

What has kept Mina’s sanity has been his day job as a coach in Hong Kong, and, like fighting, it’s a labor of love.

“I’m really passionate to teach as well, and Hong Kong has received me very well,” he said. “I feel like I have a connection with Hong Kong and I enjoy teaching – not just for money. But I’m getting to the point where I’m going to have to make a hard decision. I see that I can be a better fighter if I only fight, but I can be a better coach if I just coach. So I’m in a situation where I’m divided by both. Ideally, if I could just survive from fighting, it would be amazing, but unfortunately that’s not my reality.

“I left Brazil more than 10 years ago,” Mina continues. “I’ve been in 32 countries, I’ve been teaching in the Middle East, Europe, everywhere, but Hong Kong treats me very well. I don’t have a big name behind me like the Gracie family or something like that. But I believe I’m blessed to be able to teach, and especially to be able to teach kids. I really like that.”

Long associated with the London Shootfighters team, Mina took the trip to Southern California this time around to work with Rafael Cordeiro and the Kings MMA team, and you have to believe that this made a dangerous fighter even more dangerous.

“I had my ass beat and I worked hard for eight weeks, and then I came back to fight,” he said. “But I believe that in 2016, I’ll have a better structure for training, better logistics and I’m going to be able to fight three times.”

If Mina gets his wish and adds more stamps to his fourth passport, we may be talking about him as a legitimate title threat at this time next week. But in the meantime, he’s open to any opportunities that might come along, looking to the past as proof that if you’re always ready, good things have a way of presenting themselves.

“I’m super excited,” Mina said. “If you just see the little things that happened with this card – some guys pulled out, some guys got injured, and we always have to be ready. Remember the (TJ) Dillashaw situation? The guy (Joe Soto) jumped from the prelims to fighting for the title. It’s crazy, but you have to persevere and be positive. I consider Akiyama to be the favorite, which is very good for me. I like to be the underdog.”