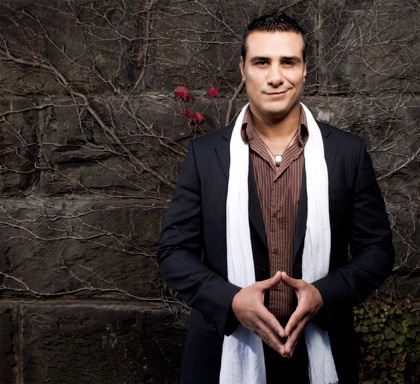 Jose Alberto Rodriguez has gone by many names in his professional life. Currently, he graces pro wrestling rings as Alberto El Patron, and while he may be best remembered for his long stint in the WWE as Alberto Del Rio, mixed martial arts fans will likely recall him as Dos Caras Jr.

But whatever moniker he’s going by in everyday life, Alberto will suffice. And if it’s a description of who he is that you’re seeking, “fighter” would be an apt description for him mainly because combat sports have been a part of him for much of his 38 years.

And if not for decisions made at the top leading into the 2000 Olympics, Del Rio’s path in life may have been quite different than it is today. Or maybe not, considering that his father, legendary luchador Dos Caras, is an icon in pro wrestling and one that may have had his son join the family business regardless of what happened with the Sydney Games Del Rio was a favorite to compete in.

“Back in 2000, I was the best wrestler on the Mexican team,” Del Rio said while in Las Vegas last month to commentate for the MMA promotion, Combate Americas, which was founded by one of the key figures in the creation of the UFC back in the early 90s, Campbell McLaren. “I was winning everything, all the Greco-Roman tournaments. It’s just that year is when we needed to go to 10 different tournaments in order to qualify and Mexico didn’t have the money. Or had the money and didn’t want to use it on the wrestling team and that’s what stopped me from going to the Olympics. And when they said: we only have money to go to two qualifiers. I said: okay, there’s no way we’re going to qualify, I’m outta here. And I became pro.”

Beginning his pro wrestling career at home in Mexico, the San Luis Potosi native also began making inroads in mixed martial arts. After five pro fights in Japan he got a call from the PRIDE organization to compete on their first Bushido card. His opponent was Mirko Cro Cop.

The year was 2003 and Cro Cop was at the height of his powers, unbeaten in nine MMA fights and fresh off back-to-back knockouts of Heath Herring and Igor Vovchanchyn. There was probably no fighter more feared at the time than the Croatian KO artist, but Del Rio, just 3-2 as a pro, didn’t hesitate to take the fight.

“Back then I was training with (UFC pioneer) Marco Ruas,” Del Rio explains. “He was my mentor in mixed martial arts and when that fight happened, I felt ready. Marco Ruas thought I was ready too, but like you said, Mirko was in his prime when I fought him and you know the result. (Laughs). He was too fast for me. I realized that after the fight.”

Del Rio laughs about it now, the benefit of 13 years and a successful post-Cro Cop career easing the pain of the 46-second defeat, which saw him competing with his luchador’s mask on. But at the time it was a shock to him because he went into the ring that night at Saitama Super Arena confident that he was going to win.

“When I was training with Marco we had a lot of people training with him – (Kazuyuki) Fujita, Babalu (Sobral), (Joe) Moreira – we had a lot of fighters in Marco Ruas’ camp,” he said. “And I was beating the crap out of them in the gym. That’s why Marco was pretty confident that I could do it. I thought I could do it. Of course, destiny said no and Mirko was the stronger and faster fighter.”

Del Rio continued to fight, getting one more PRIDE bout in - a decision loss to Kazuhiro Nakamura - and putting together a 9-5 record as of his last match in 2010. He never stopped pro wrestling over that time, and his father never gave him any grief about moonlighting between the two endeavors.

“My dad has always supported me in everything I do in my life,” Del Rio said. “He only asked me: Are you doing this for the right reasons or just going for the money? Because if you’re just going for the money, it’s not worth it. I told him I was doing it because I want to do it, but of course the money is good. So that’s a plus that is making me go and try this. My mom wasn’t happy, but the mother is always going to be worried.”

In 2010 Del Rio made his move to the WWE, becoming a champion and true superstar for the pro wrestling giant. By 2014 he had left the company, and while still competing in pro wrestling, his post-WWE life has been filled with questions about a possible return to MMA. The answer? Not yet. Maybe not at all, but never say never.

“Since I left WWE I’ve had several companies calling me, but I’m 38 years old. I do really, really well in pro wrestling
and the offers I’ve had from MMA organizations were good, but not fantastic,” he said. “Even though we love the sport and have a lot of passion for this, at the end of the day you have to be rewarded. If they don’t reward me, I’m not going to be happy. I miss it, but life took me in a different direction.”

That doesn’t mean he’s stopped going to the gym – and he’s not just working out for his pro wrestling gigs.

“I’m always training,” Del Rio said. “Boxing is another of my passions and I always work with (former world champion) James Leija in San Antonio to train boxing. I bring my kid, and he’s only five years old and he’s doing boxing already. I also go with my friends sometimes to roll around in the jiu-jitsu dojo. I’m still active, but I don’t have any plans to go back to fighting, not in the near future. But I’m doing everything I can to stay in good shape in case somebody comes with a good offer and says ‘okay Alberto, we want you, we need you, here’s the money.’”

In the meantime Del Rio is content being a fan of MMA. And with the UFC making waves in his native Mexico, there’s no better time than now to do that.

“We are warriors,” he said when asked about the appeal of combat sports to fans in Mexico.  “We have been fighting since the beginning of our history, with the Mayans and the Aztecs. We embrace the contact sports, especially boxing. And we have had a lot of champions in boxing. My favorite one of all-time being Julio Cesar Chavez. And now that the UFC is going to Mexico and we have UFC on TV with the UFC Network, everybody’s getting really excited. Especially having a former champ like Cain Velasquez and fighters like ‘El Goyito’ (Erik Perez) and some other Latin fighters getting an opportunity in the UFC, that is making all my people in Mexico and everybody in Latin America turn our eyes to UFC.”