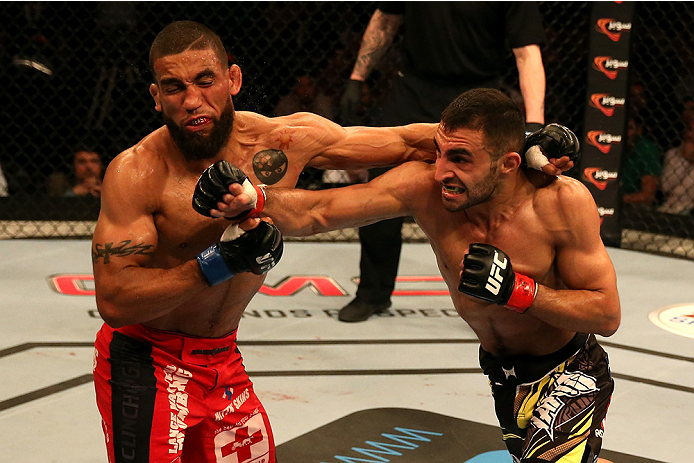 Nearly nine years into his professional mixed martial arts career, Alan Omer is starting to get a little impatient. The object of his impatience? That ever elusive UFC win, something he will get a second crack at getting this Saturday in Berlin when he faces Arnold Allen.

“Getting that first win is long overdue,” he said. “I have 22 professional fights under my belt. You see these kids fighting in the UFC nowadays with six or seven fights. After everything I’ve been through - the surgeries, the setbacks, the bad luck – I still believe I have my best years in front of me and I can make a serious impact in this sport. The time is now for
me to show it.”

Owner of an 18-4 record, Omer brought a four-fight winning streak into his Octagon debut against Jim Alers back in April of 2014, but after three hard-fought rounds, the Erbil native was on the short end of a split decision.

“I dislocated my thumb in the first round and unfortunately threw my game plan out the window and started to wrestle and grapple with Jim, which went well, but obviously played into his hands,” Omer recalls. “In the end, one of the two judges still had me winning that fight, and I personally felt that I did enough to win as well.”

It wasn’t a defeat that had fans wondering if Omer belonged. He did. He just needed to stay healthy, tweak some things, and get another call to fight. That fight comes this Saturday against late replacement Allen, who stepped in on short notice for fellow Brit Mike Wilkinson. The opponent change is inconvenient, but not cause for any added stress for the 26-year-old.

“Word about the opponent change reached me when I was already done with my training camp,” he said. “I went into my fight at UFC Berlin focusing on my strengths anyway. Without wanting to take anything away from my opponent, regardless if it's Mike Wilkinson or now Arnold Allen, I plan on fighting my fight and winning.

"Allen has a little more size and reach than Wilkinson, but he's been in the game for a much
shorter amount of time,” Omer continues. “When he made his pro debut, I already had twenty
professional fights under my belt. I will fight him anywhere the fight goes and, to be honest, I don't think he brings anything to the table that I haven't seen already."

Omer has also added to his arsenal thanks to a trip to Thailand to train with the Tiger Muay Thai team that has been producing some hot prospects making noise in the UFC in recent months.

“I knew a lot of top wrestlers from Chechnya and Dagestan are preparing at Tiger, like UFC fighters Mairbek Taisumov and Zubaira Tukhugov, and these were the type of people I wanted to train with and challenge myself against in sparring,” Omer said. “I also wanted to get away from all the distractions I had at the moment when training at home in Stuttgart. Roger Huerta and his team have been nothing but amazing; they have really taken good care of me and pushed me hard. There is just no way you won’t be 100% ready to fight when you are preparing here.”

It was a good call, because with this weekend’s card being in Germany, the heat is on for all the home country fighters to not just win, but to do all the requisite media duties demanded of local heroes. Yet despite being born in Erbil and spending his training camp in Phuket, fighting and winning in Berlin is a big deal for Omer.

“I was born in Kurdistan, but Germany is my home,” he said. “I have Kurdish blood flowing through my veins, the blood of some the bravest and most courageous men and women on the planet, who are resisting Isis and who are fighting for freedom every single day. There is a large Kurdish community in Berlin and I know they are all rooting for me, so I would love to get that win for them.”

As an added bonus, Omer’s father will be traveling to Berlin to see his son fight. As for mom, she “would still prefer to see me get a ‘proper’ job with Daimler, Porsche or Bosch.”

That’s mothers for you, yet in all seriousness, despite all the unrest in his native region, Omer says that MMA – and all sports – are a welcome escape for the people there.

“I do have a lot of relatives in Kurdistan, uncles and aunts mostly,” he said. “Some of my cousins have relocated back to Erbil after finishing their studies as well. There is a lot of curiosity and passion about the sport of MMA, and sports in general. My dream is to headline a UFC event in Erbil before I retire from the sport. I would love for the whole world to see how peace-loving and warm-hearted our people are and how far the development and rebuilding of the city has progressed. I pray that the war down there ends soon, so our people can finally live in peace.”

Omer headlining a UFC show at home would not just be a dream come true, but one of sports’ great stories should it ever happen. Not surprisingly then, Omer, having weathered the ups and downs of his career, has no regrets, simply because he believes he’s arrived to where he’s at precisely when he was supposed to.

“No, I don’t have any regrets,” he said. “Everything happens for a reason and I wouldn’t be where I am today if my life went any different.”