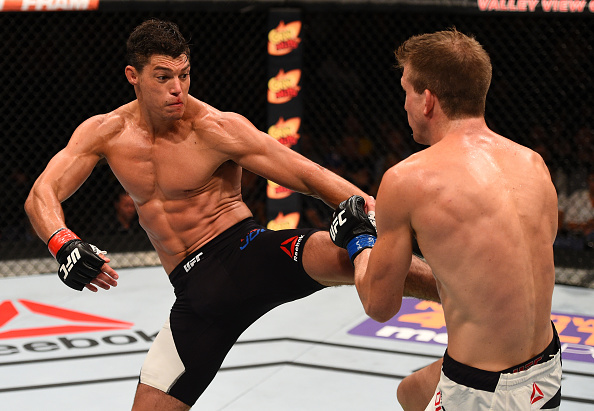 Alan Jouban’s grandfather never got to see him compete in the UFC, but you have to think that he would have approved.

The fighter’s late grandfather could easily be described as what you would call “a man’s man.” He was a cattleman who raised Brahma bulls, hence his grandson’s nickname “Brahma,” and what Jouban witnessed every day from him was a work ethic that never waned.

Those are lessons you don’t forget because you don’t hear them; you see them. And it’s clear from the moment you see Jouban in the Octagon that his grandfather’s blood is running through his veins.  It’s real.

“People can read body language, and they know when you’re faking it,” Jouban said. “With me, I’m not faking it. When you see me trying to finish somebody or giving everything I have into a punch or showing emotion or resilience after getting hit and coming back strong, that’s genuine emotion, and true fans pick up on that stuff. You can’t really fake it. You can try to play to the crowd or talk smack to your opponent, but it’s not as compelling, it’s not as genuine as true emotion.”

Heading into his Saturday bout with Albert Tumenov at UFC 192 in Houston, Jouban has stepped into the Octagon four times and left with three victories. Two of those bouts were Fight of the Night winners, and even when he’s not picking up bonus checks, the 32-year-old lightweight is always must see TV, and not because he’s in there engaging in slugfests where defense is an afterthought (though there have been a few of those over the years). Jouban’s gift is that in a world where fighters always say they’re looking for the finish, he actually chases them with a fervor.

“My coaches would probably disagree because they think I take more damage than needed, and I’ll agree with that,” he chuckles. “If I could leave every fight unscathed, then that would be the overall goal. But it doesn’t always happen with me, and we’re trying to clean things up. I go in there and try to be real precise, and then as soon as I get hit, I kind of say ‘screw it, let’s do this,’ and sometimes I take more hits than needed. But a lot of times I’ll get into these Fight of the Night, very compelling fights, but it won’t be a fight like Rory McDonald vs. Robbie Lawler. That was a tough fight to watch. But part of it’s my style, and not to pat myself on the back, but part of it’s my drive and it’s my heart.”

Jouban still has plenty of fights left in him in the UFC, but if required to put a bout of his in a time capsule today, a good example would be his most recent matchup with Matt Dwyer in July. In the midst of an entertaining first round, Jouban landed an illegal knee to the head and lost a point on the judges’ scorecards. A lot of fighters would have mentally checked out at that point, knowing that they were in a rough position where they had a huge mountain to climb to get back in the bout. Jouban’s only thought was that he hoped no one took that accidental foul as an intentional one.

“I was always super competitive in soccer, but I wasn’t necessarily a guy that got penalized that much,” he said. “I was almost hurt that I was penalized, because I’m not a guy who’s going to break the rules or intentionally foul you or intentionally try to take the easy way out. So me getting penalized, it almost hurt my heart to think that I was breaking the rules or trying to cheat my way through it, when that would never be the case with me.”

So no thoughts of the scorecards and having to go above and beyond the call of duty to get the win? Not Alan Jouban, grandson of a cattleman who didn’t make excuses, but just went to work.

“It didn’t deter my strategy at all, and it starts with going into the bout,” he explains. “Going in, I knew that I was a better fighter than Matt. Could he have still won that night? Yes. But I knew going into this fight that I was better, I was more well-rounded, I’m not gonna quit, and I was really looking to put him away that night. So even though the point got deducted, it wasn’t something where I was thinking ‘oh s**t, now I’ve got to play catch up.’ For me it was like ‘stick to the game plan, I’m gonna keep pushing forward and put this guy away.’”

He didn’t, but he stormed after his foe throughout the rest of the fight, winning a 29-27 verdict on all three scorecards, making the point deduction a non-factor. The two fighters also pocketed the event’s Fight of the Night bonus, and you have to assume there are more of those in Jouban’s future, as well as a top 15 spot at welterweight should he beat fellow prospect Tumenov this weekend.

If that happens, a lot of people may even forget that Jouban is a successful model, which is the usual storyline when talking about the Lafayette, Louisiana native, though not as much as it used to be.

“It is getting to the point where the fans and the media do recognize me as a fighter,” he said. “The fight game and the UFC fan base knows me now, so it’s not like they have to reintroduce me anymore. But the further my career goes and the more it evolves in other areas, I think it will continue to get brought up. So I think that question will always be out there because I plan on not only climbing the ranks as a fighter, but also doing more stuff in the modeling world and getting into the movies and stuff like that as well. So it’s always going to be something floating around there.”

Is he cool with that?

“I’m pretty comfortable at this point,” Jouban said. “In the beginning of my career, it was something I just didn’t want to talk about because I just wanted people to know me as a fighter. But now that people do recognize me as a fighter first who does modeling, and I’m more comfortable with it, it doesn’t bother me that much anymore. I will say that when I’m in fight mode, I am in fight mode. For instance, now I’m really close to the fight and I’m only focused on fighting. If people ask me questions about modeling, I probably just won’t answer them that much at this point. (Laughs) But after the fight, I’m very comfortable and open about it. It just depends where my focus is at the time.”

Right now, it’s fight time. And grandpa would be proud.