"I’m not really thinking about the ranks. I don’t care about what the
fans think or how confident Michael is; I’m just thinking about beating
him Saturday night." - Alan Belcher 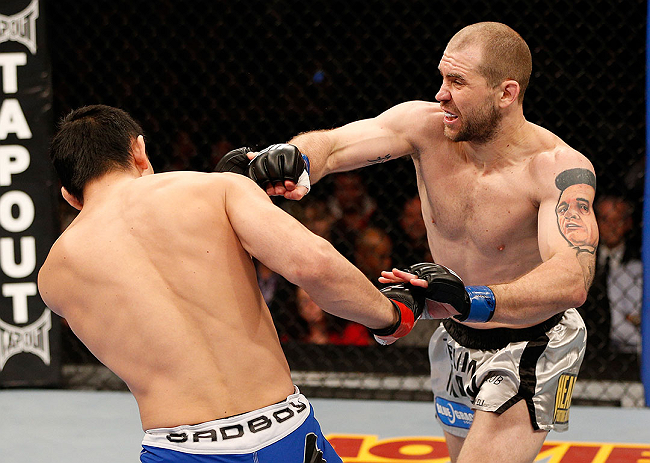 Trash talk and boisterous predictions are standard fare in sports.

Someone on one team chirps about their counterpart the day before the big game. A defensive player claims he’s not worried about what the prolific quarterback and the opposing offense is going to do on Sunday. Roughly 487 athletes every year guarantee their team is going to win their league’s respective championship.

This is going to be their year, and they’re going to run over whoever stands in their way.

In some ways, mixed martial arts is no different. Fighters make boastful promises of first round knockouts and wildly entertaining fights, disparaging the person they’ll share the cage with in the future and soft-selling their skills. Some riff on pro wrestlers like “Superstar” Billy Graham or The Grappler, while others try really hard but come up short.

Trash talk isn’t for everybody.

In basketball, hockey, football, or baseball, your predictions and proclamations can be scuttled by poor play around you. Innumerable variables contribute to the end result, and often take the ability to make good on those pre-game promises away from the one doing all the talking.

That why those rare instances where an athlete makes good on their promises stand as iconic moments in their sport’s history. Mark Messier’s three-goal night against the New Jersey Devils. Babe Ruth’s called shot. “Broadway Joe” announcing the Jets would beat the Baltimore Colts.

Most fall flat, and it has gotten to the point that guarantees have become so commonplace and overused that we barely even acknowledge most of them now, other than to shake our heads and laugh at the latest ridiculousness being uttered.

While there are just as many people making just as many promises in mixed martial arts, there is one colossal difference between the fighters talking trash and offering up predictions and their ball-and-stick brethren: eventually, you have to step into the cage and back up your words.

After infinite amounts of talk, Alan Belcher has reached the point where he’s done talking.

For the last several months, across various platforms and mediums, the confident middleweight who fights out of Biloxi, Mississippi has talked a blue streak about Michael Bisping. Even before the two were officially aligned as opponents, “The Talent” freely shared his thoughts and opinions about the tenured middleweight contender who first made his mark by winning season three of The Ultimate Fighter. Once the UFC opted to pit the verbal sparring partners opposite one another at UFC 159, Belcher’s output increased.

There were challenges and bets, NFL defensive linemen wanting to put $300,000 cars up for grabs, and videos mocking everything from the manner in which Bisping speaks to a super-imposed Belcher pointing and laughing as a replay of Dan Henderson’s knockout win over “The Count” at UFC 100 rolled in slow motion.

Usually it’s Bisping who is spitting venom and making the most of every opportunity to mock and prod his opponents heading into a fight, but in the preamble to this weekend’s event at the Prudential Center in Newark, New Jersey, the man from Orange County, California by way of Manchester, England had been seriously outdone.

Once fight week arrived, however, the two middleweight combatants traded places on the trash talking front.

While Bisping used Monday’s media conference call to land a couple clean verbal jabs on the man he’ll trade actual strikes with on Saturday night, Belcher was reserved. The hyper-confidence that carried his pre-fight videos and blogs was replaced by a voice that sounded contemplative, and answers that were stripped of any and all window dressing.

“It puts me back in the top of the division,” Belcher said flatly when asked where a weekend victory over the perennial contender would put him in the division. “We’re both coming off losses. We’ve both had wins and losses in our career, and now we’re going to see who the best is out of us two. I’m not really thinking about the ranks. I don’t care about what the fans think or how confident Michael is; I’m just thinking about beating him Saturday night.”

Not one to let an opportunity to speak his mind in front of a captive audience, Bisping barged in on the question, giving his own thoughts on what a win would mean for his opponent.

“Let me just add to that,” Bisping began. “A win over me for Alan Belcher would be by far the biggest win of his pathetic career. No one gives a f*** about Alan Belcher.”

Calmly, Belcher replied, “That’s right – so you better not lose to me. We’ll see Saturday night.”

Normally these calls and fight week itself are when the athletes who are about to step into the cage and settle their differences empty out their clips, taking every opportunity they can to get in one more shot. Belcher, it seems, entered fight week in a different frame of mind.

Late in Monday’s media call, the newly minted 29-year-old was tossed the question equivalent of a batting practice fastball right in his wheelhouse.

“I welcome it. What am I supposed to say to it?” Belcher responded somewhat sheepishly. “My Muay Thai versus Michael Bisping’s? I’m supposed to sit here and say, “My Muay Thai is better than his,” but no one is going to know until Saturday night.”

Though some may view the answer as a wasted opportunity – a weakly hit ball back to the mound on a pitch that begged to be blasted into the second deck – the fact that it was devoid of the moxie and swagger that carried his commentary leading up to this fight speaks to the difference between guarantees in most sports, and making promises in the fight business.

All the talking in the world doesn’t mean much if you can’t back it up when the cage door closes. While it’s great for drawing attention to the bout, putting a few more butts in seats, and selling a couple more pay-per-views this weekend, there comes a point when the tickets are sold, the people are hyped, and all that remains is going about the business of backing up everything you’ve said over the last two or three months.

The time for talking is over.