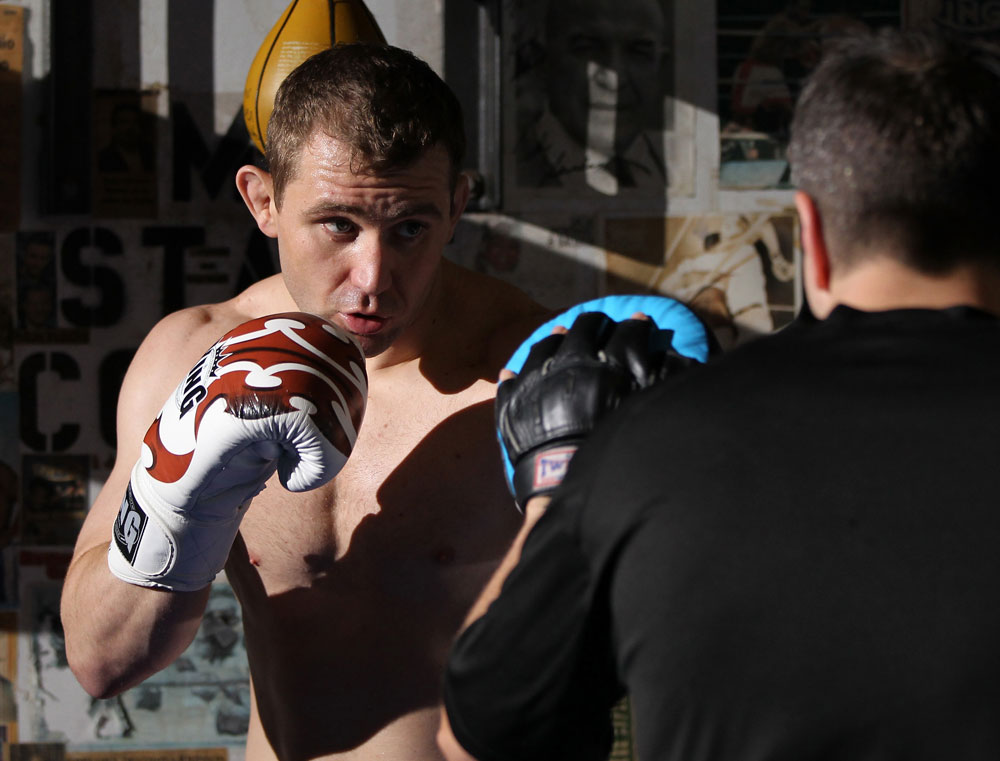 Alan Belcher used to look at fighting a lot differently back around the time of his UFC debut in 2006.

“It’s like doing a bungee jump,” said Belcher in December of that year. “Because you have to get yourself ready and there’s no turning back.”

Six years later, he is reminded of the comment and asked if he feels the same way.

“Not really,” he laughs. “I think over the years, it’s a lot more relaxed than that. Now, it’s kind of the opposite. I feel some nerves about a week or two out, but when I get out to Las Vegas and it winds down to the last couple days, I’ve done it enough times that it’s a familiar feeling and I don’t get as nervous. It’s not something you’ve got to make yourself do, that’s for sure, but it is something that if you’re not mentally prepared for it, it will definitely beat you down and you’ll pay for it.”

It’s an apt comparison to make, especially with Belcher now firmly entrenched among the best middleweights in the UFC and about to rematch the first man he faced in the Octagon, Yushin Okami, this weekend at UFC 155 in Las Vegas.

Back then, Belcher was a raw talent (pardon the pun) making a name for himself on the local circuit before getting a call on two weeks’ notice to face the Japanese contender at UFC 62 in August of 2006. Okami was making his UFC debut as well that night, but with fights against Anderson Silva, Jake Shields, Brian Foster, and Nick Thompson already under his belt, he was a heavy favorite against the upstart native of Jonesboro, Arkansas.

“Getting into the UFC at that time, just a few years before that I didn’t think it was even possible to do anything great with my life,” said Belcher. “I wanted to, but I came from a real small town, and being on TV or doing anything big was a really big deal. So at that time, when I got that call, it would pretty much be the equivalent of fighting Anderson Silva for the title on last minute notice. That’s the only thing I can really compare it to.”

Belcher lost a three round unanimous decision to Okami that night in a fight best remembered for the front flip he pulled off in an attempt to shake his opponent from his back. But following the bout, Belcher shook off some erratic early showings to become a well-rounded and legit threat at 185 pounds. In fact, if you take away his controversial split decision loss to Yoshihiro Akiyama in 2009, Belcher could be unbeaten in his last seven bouts. Add in two Fight of the Night and two Submission of the Night awards and a current four bout winning streak, and you could easily surmise that the early loss to Okami was a mere hiccup on Belcher’s road to the top. But when presented with the bout, he believed the positives outweighed the negatives.

“At this point in my career, there are not a lot of guys that I could ever rematch that would still be relevant in the rankings,” said Belcher, whose other losses on his 9-4 Octagon slate have come against Akiyama, Kendall Grove, and Jason Day. “So even though Okami is not ranked top contender or anything, as long as he’s around, he’s gonna be a solid top five, top ten guy who will give anybody trouble. He’s legit. This will be the first rematch of my career, so it will be interesting. Beating him will make my rank a little more solid, a little more legit, and it will string out my winning streak, but it doesn’t put me as top contender immediately unless I just totally wipe him off the face of the planet in 30 seconds, and I don’t think Okami’s gonna go away.”

After all this time, Belcher’s maturity as a fighter matches his maturity as a man. A married father who takes his roles outside the Octagon as seriously as the one inside it, the 28-year-old knows how the sport works at this point, and that all it takes is one lost second of focus to lose a fight and one freak accident to lose a career. In 2010, that all hit home when a detached retina threatened his day job. When he returned against Jason MacDonald in September of 2011, he was brutally honest in saying that he didn’t know what the future held after being out for over a year, despite being given a clean bill of health.

“It takes a long time to figure things out,” he admits, “and six, seven years may be a short time to some people, maybe a long time, but it’s really taken me that long to figure out how to train, peak, and prepare for a fight just right. That layoff messed with me in some weird ways and it took me a while to come back from it athletically and get my weight under control.”

Yet as soon as Belcher got back to active duty, it was business as usual, as he stopped MacDonald in less than four minutes and then scored a dominant first round TKO of Rousimar Palhares in May. If anything, he looks better and more dynamic than ever, making the rematch with Okami even more intriguing, since the ever-steady contender from Kanagawa has stuck to the ‘if it ain’t broke, don’t fix it’ adage over the years. Will it get the job done against the ever-improving Belcher? Well, that’s why they fight the fights.

“He’s made minor adjustments, but nothing really life-changing or career-changing,” said Belcher of Okami. “Obviously fighting over the years, the more fights that you have, it gives you more experience and you get better at those things that you can’t really see. But altogether, I think he’s pretty much the same fighter as before and I think that’s one advantage I have. He’s seen me change and grow and he’s going into this fight thinking that he’s gotta do something totally different because he’s fighting a totally different person. And I’m preparing for him the same way as I would have then because I know what he’s got. He’s got straight punches, strong takedowns, and good control on the ground. He’s not a real finisher, but he grinds and keeps coming, he’s a good athlete, and I’m sure he’ll be super tough for anybody to fight.”

Super tough to fight? You can say that about Alan Belcher, and though he’s had his trials and tribulations to deal with physically over the last three years, in 2013, he plans on getting back to beating folks up on a more regular basis. That’s not exactly what the rest of the middleweight division wants to hear.

“Anything can happen, but it looks like everything’s lining up for me,” he said. “The opening trail in the division is kinda cut for me. I just need to stay focused, win this fight, and then get right back in there.”

“I want to fight a lot more often in 2013,” Belcher continues. “I don’t want a shortcut to the title. There’s only a couple guys for me to beat, and I’ll fight all of them in 2013 if I have to until Anderson Silva will fight someone in the weight class.”