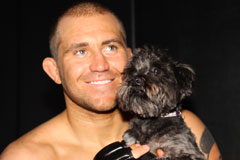 October 10, 2011 (Gulfport, MS) –  Our coast’s own UFC Mixed Martial Arts (MMA) Fighter and Gym owner, Alan “The Talent” Belcher is partnering with the Humane Society of South Mississippi (HSSM) to promote pet adoption this Friday, October 14 from 2pm to 8pm.

On Friday, October 14, Alan “The Talent” Belcher will be at HSSM’s facility on Hwy 49 to promote pet adoption in conjunction with HSSM’s efforts in the ASPCA $100K Challenge. Belcher will be locked inside one of Humane Society’s kennels i.e. “the cage” and available for autographs and photo opportunities to adopters starting at 2pm. Belcher will not be released from his kennel until HSSM has completed 50 adoptions.*

All adoptions on Friday, October 14 will be $14** in accordance with current adoption special “Pay By the Day” and ONLY those people adopting or sponsoring a pet will get an autograph and photo opportunity with Belcher AND a chance to win an autographed t-shirt or a 3-month free membership including a class of their choice at the Alan Belcher MMA Club in D’Iberville.  For more information go to UncageBelcher.webs.com

Alan “The Talent” Belcher is an ongoing advocate for animal welfare on the Mississippi Gulf Coast. He is featured in HSSM’s spay/neuter advertising featuring the tagline “Tough Guys Neuter Their Pets” and he continues his support of animal welfare with his participation in this adoption event.

As a fighter, Belcher is one of the top, rising stars in the UFC. He holds a 16-5 career record and won his most recent fight on Sept. 17 by submission, an impressive feat considering that he had not fought in over one year after suffering a detached retina.

Belcher’s participation and “Pay By the Day” are an integral part of HSSM’s efforts in the ASPCA $100K Challenge. The 49 shelters in the Challenge are competing to save the most number of lives from August 1-October 31, 2011 as compared to the same period in 2010. After the first month in the Challenge, HSSM was ranked first in the nation with an increase of 309 over the same month in 2010. The September rankings come out October 12. The grand prize is a $100,000 grant from the ASPCA, but there are several other grants available, for a total of over $300,000 that could be won throughout the Challenge.