Al Iaquinta Thinks He Is Finding His Stride

A Win Over Donald Cerrone Would Solidy "Ragin" Al's Spot At The Top Of The Lightweight Division
By Thomas Gerbasi • May. 3, 2019

When Al Iaquinta defeated Kevin Lee for the second time this past December, it wasn’t his most spectacular performance or even his most dominant. But it was his best, the kind of disciplined, well-rounded effort that made him look not just like a contender, but a future champion that saw everything click in Milwaukee ten days before Christmas.

“It absolutely did, it felt great,” Iaquinta agreed. “Even in positions when he had my back, I felt like he was expending more energy and he was more confused as to what to do from there. He didn’t really have much of an offense, even when he was in a good offensive position. So I think it all came together and I’m finding my stride.”

Many wondered if it would ever get to this point for the Long Island native, whose talent was evident from the start of his UFC career in 2012. But after injuries, inactivity and battles with the UFC brass, the idea of Iaquinta being in the title race or even in his third straight main event, this one against Donald “Cowboy” Cerrone on Saturday, was a bit far-fetched.

Yet, it seemed that from the moment he stepped in on a day’s notice to face Khabib Nurmagomedov in a five-round lightweight title fight in which he was ineligible to win the title a year ago, everything changed. Yes, he lost to Nurmagomedov in a hard-fought five-rounder, but he bounced back with the win over Lee, marking the first time since 2015 that he’s fought at least twice in one year, and all of a sudden he was ranked fourth in the world and experiencing success in and out of the Octagon.

“It’s definitely different,” Iaquinta said. “I’m in a great spot right now. The last fight was a big win, the Khabib fight got me out there, I performed pretty good and people saw what I was made of. It was a good performance in front of a lot of eyes, so that thrust me right into it, and I’m feeling good about everything. I still realize that the fight game could take a turn at any point so I’m still working the real estate and that keeps my mind stimulated in other ways, and going back and forth keeps both things fresh. When I’m tired of one, I switch over to the other and it gives me the option to focus even more on fighting because I know I’ll have that as a backup.”

So what was the secret that landed Iaquinta on his feet after a tumultuous few years and has him coming off the best win of his career? The way the 32-year-old sees it, there is no secret.

“I think it’s just an evolution,” he said. “I’m constantly progressing. Me and (coach) Ray Longo watch fights all the time and discuss where people make their errors and usually it comes when somebody either gets too aggressive or they do something out of character. So in the last fight, I was trying to just land that shot. I hurt Kevin Lee a lot, especially in the fourth and fifth rounds, and I was content just beating on him the whole time. I knew that eventually, if I did, the knockout shot would have come. I didn’t get the one shot to finish, but I did just keep beating on him.” 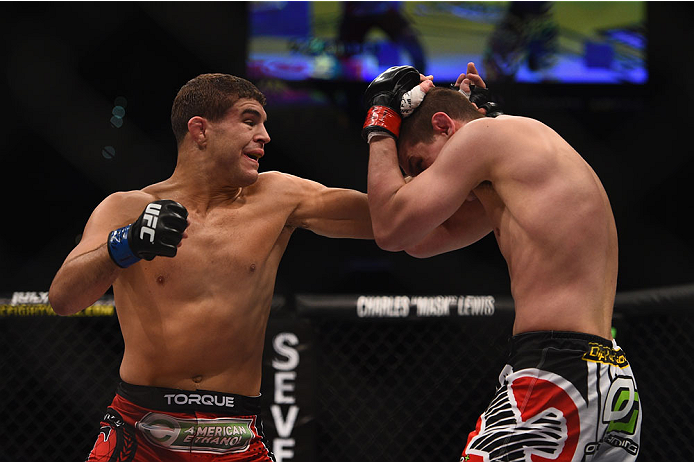 The decision was close (48-47) on two of the three judges’ scorecards, but most observers agreed with the third judge’s 49-46 nod. So did Iaquinta, who had no doubts that he was all the way back from the year-long layoff that led up to the Nurmagomedov bout.

“I’m always pretty confident in myself that no matter what happens, I’m gonna fight and perform to the best of my abilities or better,” Iaquinta said. “I train hard and I just get in there and I let it play out. I just do my best. I don’t really have anything to worry about because I know once I get in there, it’s almost like I’m not even there; the best me is gonna show up and get the job done one way or the other.”

And while a win over Cerrone might not move him any further up the lightweight ladder, it won’t hurt his standing in the crowded title picture, and if the time comes when he gets a second shot at challenging the man at the top, Iaquinta believes that with a full training camp, a fight with Nurmagomedov looks a lot different.

“Absolutely, a hundred percent,” he said. “It’s a different fight. If I have a little bit of time to just wrap my head around it and think that thing through the right way, it’s a totally different fight.”