"I have to just dominate, that’s it." - Al Iaquinta 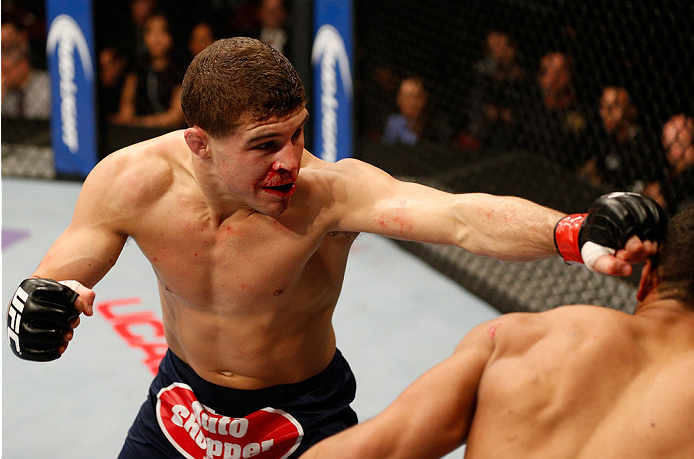 Al Iaquinta will talk about his May loss to Mitch Clarke; that doesn’t mean he wants to, and you can hear it in his voice. But the Long Islander is a pro and one of the most affable fighters in the game, so if you ask him a question, he’ll answer it as honestly as he can.

It doesn’t get more real than that, and if the “Raging Bull,” Jake LaMotta, was a mixed martial arts fan, he would likely be a fan of “Raging” Al for that kind of blunt force honesty. In Iaquinta’s world, losing is a reminder that you got off track, and now it’s time to get back on.

“I think I should have finished him in that first round,” he said of Clarke, who submitted Iaquinta via D’arce choke in round two. “Then there wouldn’t have been any chance for him in the second round. It sucked and it is what it is. I put him in a position that he had done in the past, and he capitalized on it. There’s nothing else I can do about it. The attitude I have to have is that I’ve gotta learn from it.”

“That guy shouldn’t have lasted the first round with me.”

No one wants to lose in this sport, but when a fighter does come up short, you want to see him have Iaquinta’s attitude, and it’s a philosophy shared by the fighters in the sport’s newest hotbed of Long Island. On Iaquinta’s Serra/Longo Fight Team alone, there’s Chris Weidman, Aljamain Sterling, and Eddie Gordon, with the island also being home to the likes of Dennis Bermudez, Ryan LaFlare, Gian Villante, Costas Philippou, Chris Wade, and Alptekin Ozkilic.

That’s a powerhouse lineup that you could put up against any region in the country or around the world and come up with positive results, and Iaquinta believes that the sudden MMA explosion in the area started at the grassroots level in high school wrestling.

“There’s a very close wrestling community in the high schools, and I’m still friends with a lot of the kids that I wrestled with in high school,” he said. “Chris Wade just got signed to the UFC, and I knew him and we talked about fighting before he even had his first fight. And there are a bunch of guys that you’ll probably be hearing about real soon, guys that I competed with and against in high school. We stay in touch, we kind of get each other involved in it, and that’s how I got involved in it. We’re all helping each other.”

And these days, being a mixed martial artist, especially in the UFC, is a big deal. That wasn’t always the case, and Iaquinta remembers those days well.

“Everyone looked at the guys that were doing it and it was ‘oh yeah, they do that MMA stuff,’” he laughs. “And now, everyone really knows what it’s about and it’s definitely more popular. The guys that come up wrestling, they definitely have an advantage and it’s a cool vibe on Long Island here for sure. It’s probably just getting started too.”

Is that weird to be going through something like that, to be recognized in the Roosevelt Field Mall or go down Jericho Turnpike and see a UFC Gym there?

“I don’t think it’s weird, I think it’s awesome,” Iaquinta said. “When I started I was in this little gym that no one really heard about, and there weren’t too many of them on the island. Now it’s just blown up – there are gyms all over the place, more competition and sparring. It was always hard to find sparring at a high level; now you could almost always find somebody on the island that is very similar to an opponent that you have.”

So this time around, it shouldn’t have been hard to find someone matching up to the specs of his Friday night opponent, Brazilian ground ace Rodrigo Damm, especially at Matt Serra’s Jiu-Jitsu Academy. But if you ask the 27-year-old Iaquinta about the fight, he’s going to give it to you straight once again.

“I’m just gonna put it on him,” he said. “He (Damm) seems like he’s a slow starter, so I’m just gonna go out there and do my thing. I have to just dominate, that’s it.”

“Raging” Al is back.