Al Iaquinta: More Dangerous Than Ever 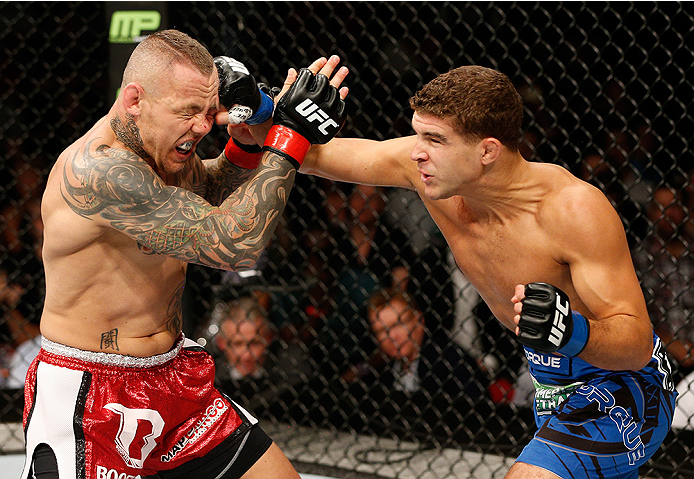 That’s the one thing Al Iaquinta couldn’t imagine traveling without. It took the surging lightweight a few moments to carve out the answer to the lofty question, but when he delivered his response it came with absolute certainty.

“You have to have hair gel,” Iaquinta said in the front lobby of LAW MMA. “You want to make sure you look good wherever you are and that means you are going to need hair gel.”

While the Serra-Longo product would crack a smile and a few laughs after paying a passionate homage to styling products, it was absolutely clear to anyone looking just how comfortable he was in the moment. He had just wrapped up a session where his fellow teammates did their best to push him to the limits, as the biggest fight of his career against Ross Pearson was looming just around the corner.

Up to that point, Iaquinta had faced a collection of seasoned, yet relatively unknown, veterans inside the Octagon, and the “Real Deal” provided the opportunity to take a big jump up the lightweight ranks. The New York native had won four of his five showings since competing on The Ultimate Fighter, and a win over Pearson would serve to usher “Raging Al” into a brand new realm of competition at 155 pounds.

Iaquinta was relaxed and confident in the lead-up to his fight at Fight Night: Rockhold vs. Bisping, as there was no doubt the hard work and sacrifice required to win big fights had been invested. He squared off with the British slugger looking to put Pearson away and that’s precisely what he accomplished as he scored the second round TKO finish. Despite Pearson being an accomplished striker with solid boxing skills, Iaquinta’s speed and power proved too much as he starched Pearson and picked up his second consecutive victory in the process.

“I was really excited to get the fight with Pearson,” Iaquinta said. “He was coming off a big win and had the biggest name of any fighter I had faced in the UFC. Up until that fight, I had been in the Octagon with some really tough guys, but Ross was the first person I was able to tell people I’m fighting and they actually knew who he was. No offense to my previous opponents, but it is kind of nice to tell people who you are fighting and them not having to pull out their phones to look up your opponent.

“The actual fight went a lot like we thought it would. I knew my power was going to make a big difference once things got going and that’s exactly what happened. I got a great finish over a tough guy and I couldn’t be happier about it.”

He also knew the win would provide a bigger named opponent in his next fight, and that notion ultimately came true as well when the promotion tapped him to face Joe Lauzon at UFC 183 this Saturday in Las Vegas. The Massachusetts native is as scrappy as they come on the sport’s biggest stage and has built a career by logging one impressive performance after the next.

Where Pearson represented a move up in competition, the bout with Lauzon could very well usher him into the elite level of the lightweight division, and the potential catapult served as additional motivation as Iaquinta prepared for the showdown with Lauzon.

Furthermore, Lauzon will represent another opponent who Iaquinta’s friends and family don’t have to Google to find out about.

“That’s another plus to this fight,” Iaquinta laughed. “Everybody knows who Joe Lauzon is and he’s been doing his thing at a high level for a very long time. He’s been in some wars and he’s definitely not afraid to mix it up wherever the fight goes. I love it. I’m an aggressive guy who likes to bring the fight to my opponent and Lauzon is the same way. That’s the recipe for a perfect fight for the fans and I think this fight is going to deliver.

“Lauzon is a guy who doesn’t need a big opening to pounce on an opportunity, but I’m prepared for whatever he brings. My coaches have me ready for anything and I can’t wait to get in there with him. This is a big fight and another big opportunity for me to move up the lightweight ladder.”

Iaquinta knows the opponents he will face as he moves up the ranks of the 155-pound division will only continue to come with bigger profiles and more versatile skill sets, but that’s exactly the way he wants it. The 27-year-old Long Island representative believes he’s coming into his own and is ready to take on the best lightweights the world has to offer.

He’s been a highly touted prospect since before his time on TUF, as he dominated the regional scene in New Jersey on the strength of raw talent alone. That said, working alongside coaching gurus Ray Longo and former welterweight champion Matt Serra have groomed Iaquinta into a versatile fighter who can finish his opposition on the feet and when the action hits the canvas.

With an ever-expanding arsenal, Iaquinta is as dangerous as they come at 155; he only needed experience inside the Octagon to help sharpen his skills to their fullest potential. Now, with the fights getting bigger and his resume growing, the New York-based slugger believes the very best he has to offer is coming on the road ahead.

“I feel better than ever, man,” Iaquinta said. “I’ve been working hard for a very long time and it was just a matter of translating what I was able to do in the gym to the big stage. I had to get comfortable in there, and now that I have, I really think my true potential is going to show inside the Octagon. I’m excited for this fight with Lauzon and the chance to get back out there and show what I have. That’s what it’s all about.”