"There’s nothing else that I’m even spending much thought on besides the tournament and getting that contract." - Al Iaquinta 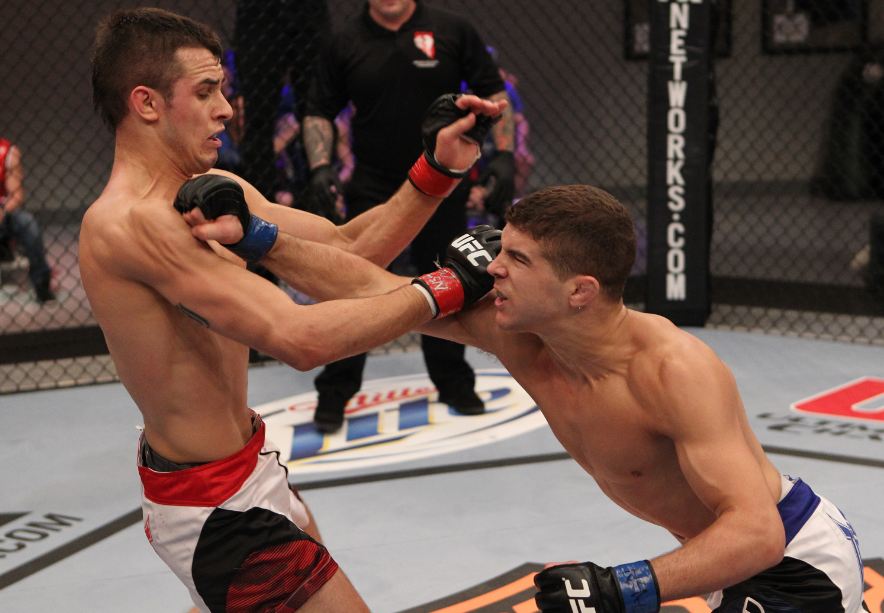 More than anyone in the Ultimate Fighter Live competition, Al Iaquinta went into the 13 week reality series with a little more ammo than most when it came to what he was getting into, considering he’s coached by season four’s Matt Serra and is a Serra-Longo fight team squadmate of Pete Sell, who also appeared on TUF 4. But Iaquinta will have some playful ribbing to do to his fellow Long Islanders when they’re in the same room together again.

“Anyone that complains about six or eight weeks has got nothing to complain about,” laughed Iaquinta, who will fight fellow Team Faber member Michael Chiesa this Friday night for the TUF Live title. But don’t get the 25-year old wrong. He’s not complaining. In fact, this life changing experience is one that he will look back on as a positive one.

“They (Serra and Sell) did give me a little warning about what I was getting myself into, but living through it and having to do it myself has been a great experience,” he said. “Even dealing with all the things that I was sacrificing while I was there makes it so much more worth it when I walk into a room with the top prospects in the world and I’m training with them every day. And then I’ve got coaches like Urijah Faber and his crew, and the guys flying in, like Phil Nurse and Mark DellaGrotte. For me to get experience like this, I would have to travel and spend so much money to get around, but here, everyone’s coming right to me, and there’s nowhere in the world that you can do this but right here, and I’m just so grateful that I’ve had the opportunity.”

Owner of a 5-1-1 record before setting foot in Las Vegas, Iaquinta left the house with four wins which showed off a vast array of talents, from wrestling, to Octagon control, to fight ending power. But after decisioning Jon Tuck, Myles Jury, and Vinc Pichel, and knocking out Andy Ogle, the traits most would take away from seeing him fight are his heart and his intensity. Iaquinta gutted out close wins against Jury and Pichel, results that are even more impressive when you consider what was on the line in each bout. And when it comes to his intensity, suffice to say that Iaquinta looks like he could stare a hole through a brick wall when he’s in the Octagon, rarely even cracking a smile when it’s time to go to work.

“I think that’s just my demeanor,” he said. “I’m a laid back kind of guy and I don’t really get too crazy. I like to stay focused. I think if I concentrated too much on one fight afterwards, I’d kind of lose focus on the next one. So I just gotta look to the next one, and that’s how I’m doing it.”

It’s almost a complete 180 from what Serra and Sell represented in the Octagon, as both showed their intensity in a different way, with emotional performances that left their intentions unguarded. But with Iaquinta and stablemate Chris Weidman coming out with poker faces before disposing of foes, it’s clear that there’s a new breed of fighter coming out of a tri-state (New York, New Jersey, Connecticut) area that is starting to produce a series of world-class MMA fighters.

“There was a great foundation with the wrestling in the area, and there are also some tough kids around here,” said Iaquinta, a jiu-jitsu purple belt under Serra who wrestled at Nassau Community College. “It might have taken a little longer because it’s not legal in New York so people didn’t get exposed to it right away. But now the sport’s blowing up, and people are really tuning in and starting to train. There are more gyms opening up, so it’s starting to blow up on the island and in the tri-state area.”

And Al Iaquinta is helping to lead the charge. You just won’t see it on his face.

“It’s definitely eye on the prize, and everything else is just supplementary,” he said. “There’s nothing else that I’m even spending much thought on besides the tournament and getting that contract.”