Akira Corassani: In the Stockholm Spotlight

"It’s business. When I step in there, it’s nothing personal at all." - Akira Corassani 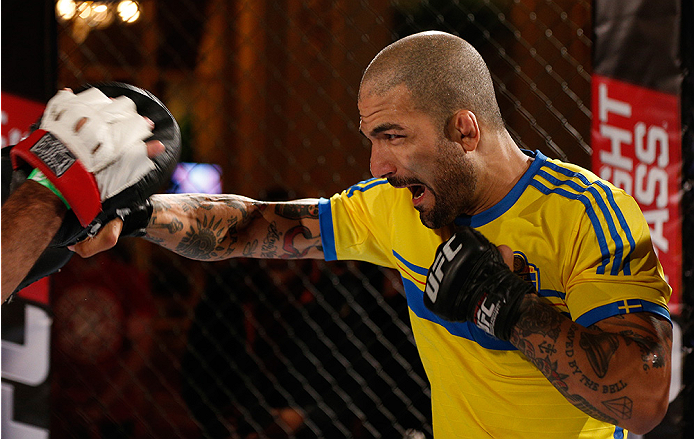 Akira Corassani has lived in the United States for the last three years, but his heart will always be in his native Sweden. So even though he says he was “somewhere in the middle” when it comes to the evolution of mixed martial arts in his home country, he still beams like a proud papa when he watches the sport explode there.

“Watching these new guys coming up, it’s a lot of fun,” the Lund native said. “And it’s going to get crazier. It’s going to be one of those things where in five or ten years you’re going to look back and say ‘wow.’ You’re going to be like that grandfather talking about how things were in your time. That’s how fast the sport is growing there.”

Luckily, at 32, Corassani is old enough to have been there in the dark ages and young enough to still enjoy the boom years as an active competitor. And those dark ages, yeah, they were dark.

“We started off when MMA was illegal,” he recalls. “Then it was legal and we didn’t have to travel anymore to these shady shows where a motorcycle gang was arranging a fight show somewhere in Germany with stomps and elbows and basically no rules and no weight classes. (Laughs) It was crazy in Europe back then. But when they legalized it in Sweden, we had a playground at home and it was safe and it was amazing. And MMA has taken off so much. It’s crazy how popular it’s become over in Sweden.”

This Saturday, Corassani will be back home, fighting in Stockholm’s Ericsson Globe Arena in a co-main event against rising star Max Holloway.  The Hawaiian replaces Chan Sung Jung in the bout, but that’s been of no concern to Corassani.

That’s as blunt as an assessment of an opponent as you’ll get, but Corassani isn’t one for small talk. You ask him a question and you’ll get an answer, and even though he’s one of the most intense competitors in the game when it comes to the fight itself, he insists that there’s nothing involved there except a desire to do his job.

So when he and Dustin Poirier seemed to be thisclose to getting into it on weigh-in day before their eventual Fight of the Night battle in April?

“That time, the fight was a little personal,” Corassani deadpans. “He was pissed because I took the fight. (Laughs) But then we had a beer, and we’re good friends today. But I’ll fight him again. I definitely want to fight him again.”

Corassani was stopped in the second round by Poirier, snapping his three-fight winning streak, but his effort in defeat may have earned him even more fans. It’s little consolation to the competitive featherweight, who now makes his home in Hoboken, New Jersey.

“The last fight was a little bit crazy,” he said. “We can make tons of excuses, but I shouldn’t have fought. My coaches all told me, don’t take the fight. My nose was far away from healed. I was sparring with what was like a hockey mask, so I wasn’t getting touched until the fight itself. That was the first time I took the mask off and went for it. Whatever. It’s all an excuse and it doesn’t matter today, but it definitely threw me off. I broke my nose two minutes into the fight, and it was just a bad night all in all. I’m not saying I would have won, but it was just a bad night.”

So why fight then?

“I’m crazy. That’s what it is. I love challenges and I love to be in bad spots where I challenge myself. It’s stupid sometimes, but this time, everything has been perfect and on point. It’s cliché, but I’ve never looked like I look now. I’ve never been this good and sharp and focused.”

You could say he’s in a decent spot in his career despite the Poirier loss. He’s won seven of his last nine fights, he’s gone 3-1 in the Octagon, and his lone defeat in the UFC was Fight of the Night. He doesn’t agree though.

And there’s no better place for him to be – in a co-main event, in his home country, in what is probably the hottest division in the UFC right now. All that stands in his way is Max Holloway. Will there be Poirier-esque fireworks again?

“I like him all the way in there,” Corassani said. “Then the door closes, and it’s neither hate or love. It’s just business. It’s like an animal waiting to eat. I don’t think animals think twice about things; they just have to eat and that’s it.”