Akira Corassani: Coming Home to Put on a Show

"The best part of my development has been the MMA aspect and putting
everything together. I am more well-rounded than I’ve
ever been and it feels like everything in my game is falling into place." - Akira Corassani 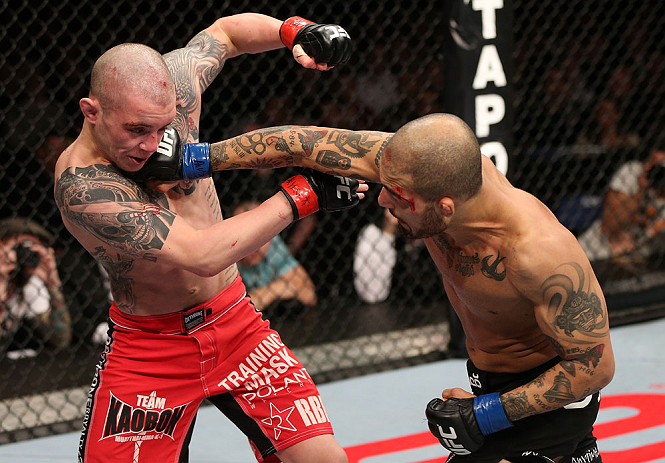 It has been two years since Akira Corassani has competed in front of a crowd in his home country of Sweden, and the hard-hitting featherweight is looking to make his return a memorable affair.

Corassani will step back onto the sport’s biggest stage on April 6 when he squares-off with Robbie Peralta at UFC on FUEL TV 9 in Stockholm. The opportunity to fight inside the Octagon for a passionate crowd in his native country is something he could have only imagined a short time ago, when his mixed martial arts career was just getting underway. But now that dream has become a reality for the Renzo Gracie Combat Team fighter and he has every intention of making good on his second showing under the UFC banner.

“It is a dream come true,” Corassani said. “If you were to mention UFC in Sweden eight years ago, people would have laughed at you. Even going back five years ago, I would sit around with my friends and watch UFC on television. To see how big the UFC has become in Sweden and the fact that I get to fight on this card just shows that anything is possible. It shows how much work Dana White, Lorenzo Fertitta and the people at the UFC have put into taking this organization worldwide. The Globe Arena is one of the best arenas in the world. The UFC coming to Sweden is a dream come true for the fans, fighters, and everybody involved.

“Swedish people are very passionate to begin with. Whether it is soccer, hockey, music—whatever, the Swedish people are very passionate about supporting their fellow citizens. But I was actually kind of surprised how fast the events sold out both last time and for this card. The first event sold out in an hour or two and was one of the fastest sellouts in UFC history. The Globe Arena has hosted some of the biggest names in entertainment and the UFC comes there and sells out that fast? That is really saying something. It shows how passionate the Swedish fans are.”

The 30-year-old New York transplant edged out Andy Ogle via split decision in his Octagon debut at UFC on FUEL TV 7 in England last September. The fight was not only his first official victory under the UFC banner, but marked the end of a layoff due to injury which sidelined him for the nearly two years.

While defeating “The Little Axe” was a solid first step in his UFC career, Corassani plans on leaving no questions on the table against Peralta this Saturday. He believes it is going to be an action-packed affair and Corassani is excited to mix it up with the 27-year-old Californian.

“It was an amazing feeling to get that over with and get a win in my UFC debut,” Corassani said. “To come back after such a long layoff and get a win to start out my UFC career was amazing. It got me excited and made me look forward to the new battles coming my way.

“I think I matchup with Peralta amazingly. He’s tough and he comes to bang. That’s the way I love to fight and I’m not a guy who backs down. He doesn’t like to back down either and that opens things up for an amazing fight. I think I have all the tools to beat him. I use my range better and I have better wrestling and jiu-jitsu than he does. My boxing and Thai boxing is better as well. If he shows up in great shape and brings his ‘A’ game, then the fans have an amazing fight to look forward to.

“People are going to get everything they paid to see in this fight,” Corassani added. “I always bring it. There hasn’t been a single fight in my career where people will say it was a boring fight. I’m a showman, an athlete, and everything people want to see. I’m going to bring it in this fight the way I always have.”

While the bout with Peralta is the immediate focus for Corassani, the quest to develop his skills is at the foundation of his motivation. Mixed martial arts is a dog-eat-dog sport where the fighters who continue to progress will rise and those who become stagnant fade away.

That being said, Corassani also fully understands the UFC is where the best of the best step in to compete. And with knowing he is going to face the best fighters in the world, there is nothing about his development Corassani takes lightly. With the team of trainers, coaches, and fighters he has surrounded himself with, Corassani believes he is taking the correct steps to ensure he will be fighting under the UFC banner for a long time.

“The best part of my development has been the MMA aspect and putting everything together,” Corassani said. “I am more well-rounded than I’ve ever been and it feels like everything in my game is falling into place.

“I’ve always had natural power, but now that I’m training with Mark Henry, my power is beyond what it has ever been. He has shown me the correct way to transfer my power from left to right. I’m actually scared to be honest. I’m scared of what I can do. But you have to be well-rounded if you are going to do well in this sport and I believe I have a lot of weapons.

“You see some guys in this sport where they will shoot for a takedown because it is all they have. They will come up short on maybe one or two attempts, then you can see it in their eyes where they are like, “Holy s**t, what am I going to do now?’

“This is the highest league in MMA and you have to make a statement every time out. You either perform or you are out. That’s how it is. The UFC and the fans aren’t going to come around and pat you on the back like your mom or dad. This is the highest level of the sport and you better go out there and perform because that is what people expect. People don’t want to see a fighter coming out there and getting tired. They want to see good fights and you have to go out there to make a statement. “