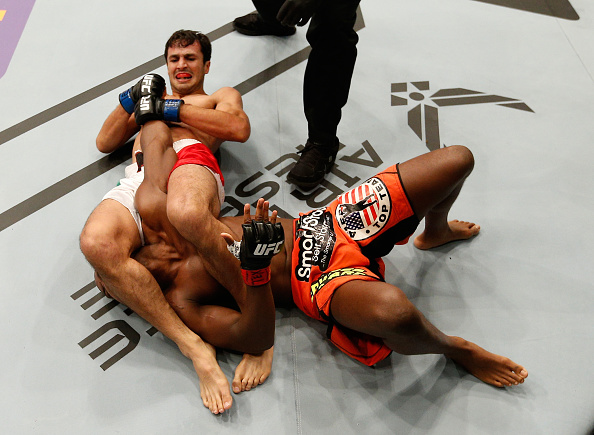 When approached to fight Jake Matthews this Saturday in Melbourne, Australia, just a week before the UFC returns to Mexico, Tijuana’s Akbarh Arreola’s didn’t balk and ask for a matchup in his home country; he said yes to the Matthews fight, and it didn’t matter where it was.

“I’m very happy for the opportunity,” he said. “Yeah, it is hard to travel as a fighter, but it’s part of the job, and I understand that. I take it in a professional way. Fortunately I’m going to be able to be there several days before the event, so that’s gonna help a lot.”

When it comes to handling his business in and out of the Octagon, Arreola is a pro’s pro. A veteran of 33 fights in a career that began in 2002, the 32-year-old began competing in MMA before there was even an inkling of the UFC going to Mexico and putting regular events on there. Of course there was already a tough local scene there, and that’s where Arreola made his bones, fighting standouts like Mac Danzig, Antonio McKee, Toby Imada and Gabe Ruediger. He also believed that one day, the UFC would arrive and give local fighters like himself a chance to shine on the sport’s biggest stage at home.

“I really believed that that could happen in the future because I saw other sports, such as the NFL, going to Mexico City,” he said.

Arreola’s shot in the big show came before the big show came to Mexico, though, as he was signed to the UFC in 2014, losing a decision to Tiago Trator in July of that year. Four months later, he got into the Octagon win column in a big way, submitting Yves Edwards in under two minutes. A loss to Francisco Trinaldo in his last bout in March left him at 1-2 in the UFC, which has left him on the fence when asked to assess his run in the promotion thus far.

“So far, I think it’s very neutral,” he said. “I can’t say it has been great and I can’t complain either. And that’s why this fight is important for me to start to turn it all my way and have a very good experience.”

Aussie phenom Matthews is coming off the first loss of his pro career in May, when he was submitted by James Vick in the first round. But at home in his native Melbourne and hungry for redemption, Matthews is going to be a tough out for Arreola, who knows what he’s up against.

“Even though he’s young, he’s experienced,” Arreola said. “He’s explosive and strong, and he’s in his hometown, so I think it’s a very serious opponent for me, coming from a very bad loss and going all the way to Australia. But I’m motivated, I feel very good right now, my health and training has been very good, and I think it’s better than last time, so I’m very happy to compete.”

Arreola also knows that a key to victory may be to put some doubt in Matthews’ head early, causing him to second-guess himself in his first bout since the Vick loss. But it’s not the only key for “El Caballero.”

“That’s important, but I cannot lose composure, and that’s more important than making a statement to him,” he said. “I need to focus on myself and try to win the fight, more than making him think other things. So as long as I’m winning, I think I’m gonna be on good terms with myself, and that’s the main plan.”

“I want to fight three times, but no less than two times in 2016,” Arreola said. “That’s what I will try to accomplish. And if fighting in Mexico is possible, that would be awesome. I’ll trade two for one in Mexico.”