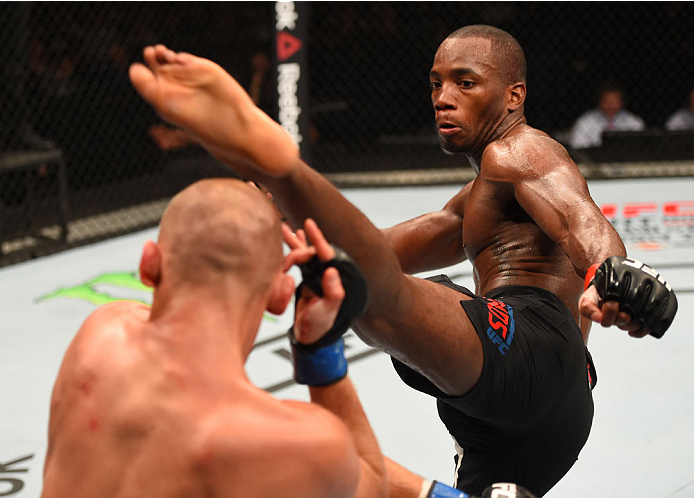 When it comes to coaching and training, there is no one formula in mixed martial arts that works for everybody.

Many say you can’t be a big fish in a little pond, but flyweight champion Demetrious Johnson is among the very best in the UFC today and operates out of the MMA equivalent of a private, man-made fishing hole at AMC Pankration, where he and only a handful of others hone their skills with “The Wizard,” Matt Hume.

At the same time, there is no denying the success larger gyms like American Top Team and Jackson-Wink MMA have had at this level, with multiple champions and elite contenders passing through their halls each and every day.

What works for some may not work for others, and as fighters continue to pursue their craft in search of greatness, they work to find the situation that best fits them. Three fights into his UFC career and riding a two-fight winning streak, welterweight upstart Leon Edwards believes he’s found his ideal combination.

For the second time in his last three fights, the 24-year-old Englishman has done his preparation on opposite sides of the Atlantic, spending several weeks in San Jose, California at the American Kickboxing Academy before heading home to finish out his camps in the comforts of the Ultimate Training Center.

“This is my second time at AKA,” Edwards explained prior to departing for Orlando, Fla., where he’ll square off with Kamaru Usman in a meeting of intriguing welterweight prospects this weekend. “I trained there for the Seth Baczynski fight as well.

If the results of the fight are any indication of how well this combination works for Edwards, Usman and anyone else who opts to sign on the dotted line opposite the man they call “Rocky” better keep tabs on where he’s training as Edwards needed just eight seconds to dispatch Baczynski and earn his first UFC victory back in April. He’s since added a second straight win to his resume – a unanimous decision win over Pawel Pawlak in Glasgow, Scotland – to enter this weekend’s matchup on a hot streak.

But the success of his 2015 campaign to date hasn’t fazed Edwards, who admits he was nervous when he took the cage for his UFC debut on the road in Uberlandia, Brazil against Claudio Silva in November of 2014. With that one behind him, it has been smooth sailing since.

“My last two fights, I’ve been feeling more and more comfortable in the Octagon, so I’m ready to just get in there and get over it; my camp has been so hard.”

Looking at the matchup, which serves as the final bout on the UFC FIGHT PASS portion of the 13-fight event at the Amway Center in Orlando, first impressions may make it appear like the deck is stacked against Edwards.

Saturday marks the first time that he’s fighting in North America and he’s squaring off with Usman, who is making his first appearance since the 27-year-old member of The Blackzilians emerged victorious on Season 21 of The Ultimate Fighter, and it’s in Usman’s backyard to boot.

But just as his success in 2015 altered his approach, squaring off with a recent TUF winner across the pond and on his home turf doesn’t faze him.

“He won TUF, but I don’t think that was a high level of competition on that TUF, to be fair. I’m not really focusing on if they’re pushing him or not; I’m just going in there to play my game. I’m not really worried with what Usman is bringing into the fight. I’m more focused on what I’m doing.

“I think it’s just the way I am,” Edwards added in regards to the carefree approach he carries into this matchup. “But I also know how much work I’ve put in to get this.”

Having found the perfect blend with his preparation, all that remains for the steadily improving welterweight is to step into the Octagon Saturday night in Orlando and push his winning streak to three to close out the year.

And if it all goes right, Edwards already knows how he wants to start 2016 as well.

“As soon as I win this fight, I want to fight in my hometown in London, so I want to get this finish and move on to London in February,” he explained.

Fortunately for Edwards, he doesn’t have to rely on Santa Claus to make his Christmas wish come true; he gets to step into the Octagon and give himself a chance of getting what he wants by getting the job done in a timely fashion against Usman, and that’s precisely what he plans to do.

“The perfect fight is me fighting my fight - dictating the pace, not letting him stall with his wrestling; out-move him and try to get a finish.”