AJ Dobson Is Ready To Go

AJ Dobson Has His Sights On A Big-Time Performance In His UFC Debut At UFC 271: Adesanya vs Whittaker 2
By Thomas Gerbasi, on Twitter: @TGerbasi • Feb. 10, 2022

It’s not always wise to assume, but after AJ Dobson earned a UFC contract with a first-round finish of Hashem Arkhagha, the assumption was that in a gym populated by old-school, no-nonsense folks like Mark Coleman and Matt Brown, there wasn’t exactly a cake-filled celebration when Dobson returned to Ohio.

Is that a correct assumption?

“Absolutely,” laughs Dobson. “It was definitely just expected. I've been training at a high level for a long time and through injuries and stuff like that - that's why it took me this long to get here. But for years, Matt has been telling me I belong in the Top 10 with all these guys. So it's definitely something that we've been looking forward to.”

The talent has always been there when it comes to the Brooklyn native, so when he improved his unbeaten pro MMA record to 6-0 with 1 NC last September in Las Vegas, there was a sense like this was something written in the stars. So yeah, on to the next one for Dobson, who is in the perfect place to keep his championship dreams alive as he awaits his Octagon debut against Jacob Malkoun this Saturday in Houston.

“I think if you celebrate too much, it kind of numbs you a little bit and you kinda go, 'Oh yeah, I did it, so now I can back off,'” said Dobson. “When in reality, it's the complete opposite. I got signed to the UFC - now it's time to work. Whatever you've been doing, it's time to double down, triple down and sacrifice some more. I need that energy and I thrive off it, and I think that's why Coleman was the first champion, that's why Matt has the most knockouts in welterweight history and is en route to tying Derrick (Lewis) in his next fight. It's having that mentality that the work's not done. There's always more to do.”

That mentality isn’t easily taught. It can be developed over time, but mainly, for those like Dobson, that work ethic is in the blood.

“Honestly, I think that was just something that's always been a part of me,” said the 30-year-old, who now makes his home in Columbus. “I come from a family of immigrants. I was the first person in my family who was born in America. My whole family's Jamaican, and my mom is the hardest to please woman ever. (Laughs) She's always set expectations so high for me, so whenever I do something, it's like, 'Yeah, you should have done it. Now what's next?' And I think that leads to greatness. You never get complacent and you're always striving for better.”

Strangely enough, though, fighting wasn’t the initial blip on Dobson’s career radar. It was acting.

“That was my goal,” he said. “I was big into theater. I'd do the acting camps over the summer for six to eight weeks, and then during the school year I would go to acting classes on the weekends and do plays. It's so funny, but when I moved to Ohio, I just completely dropped that and became a jock. It was the weirdest thing. I didn't even think twice about it. I was like, you know, why not try wrestling and football and baseball? But it's definitely something I'd love to get back into.”

Those acting chops are apparently coming in handy as he gets ready for the bright lights that await him at Toyota Center this weekend.

“I'm definitely freaking out, but I have a good poker face,” he laughs, but in all seriousness, he’s ready for the next step in his career and taking the approach that it’s just another fight. 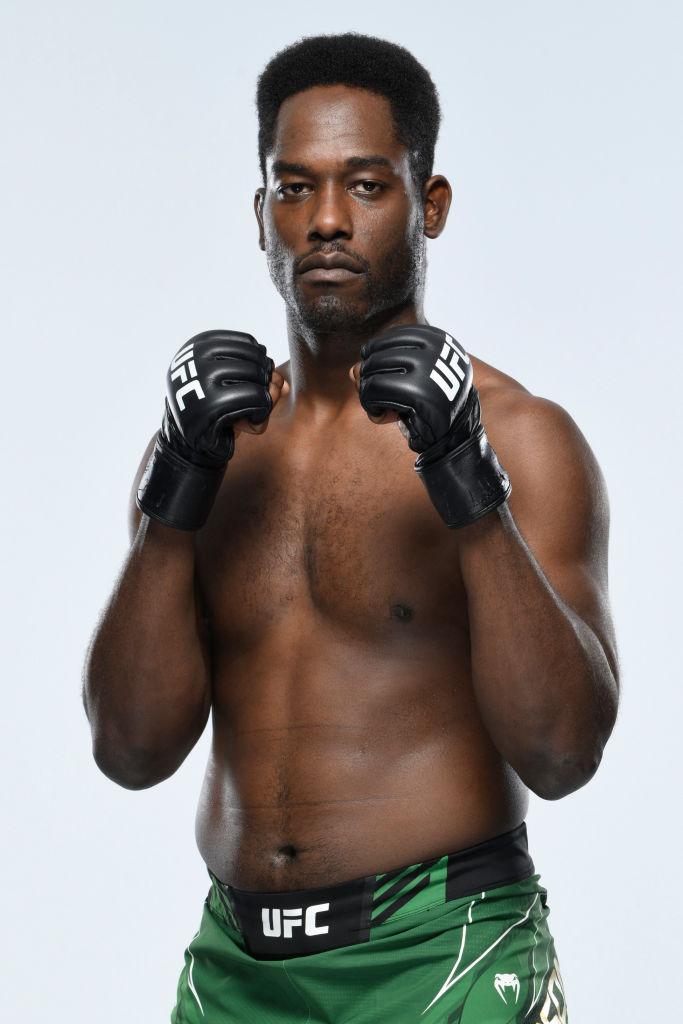 AJ Dobson poses for a portrait during a UFC photo session on February 9, 2022 in Houston, Texas. (Photo by Mike Roach/Zuffa LLC)

“The only thing I have to focus on is, am I in shape enough for this fight and do I have a good game plan for this guy?” said Dobson. “As long as I check those boxes, everything else is white noise. It just doesn't matter to me.”

Sounds a little like a guy who goes by the moniker “The Immortal.”

“I had a really good mentor in Matt Brown,” Dobson said. “I really got to see, step for step, everything that it takes to be a UFC superstar and what you've gotta do. And he's somebody that doesn't give compliments frequently. When he looks you in the eye and says, you're ready, you should be in the Top Ten, you're the man, that's the type of stuff that makes you go, okay, I should be here, I'm ready to go.”

Talking with Dobson, it’s hard not to picture him and Brown as being the odd couple, with the gruff welterweight veteran butting heads with the affable Brooklyn native. So is Dobson the happy guy in the gym?

“I would say so,” he laughs. “I have my grumpy moments, but I would say I'm cheery. I've got a lot to be thankful for.”