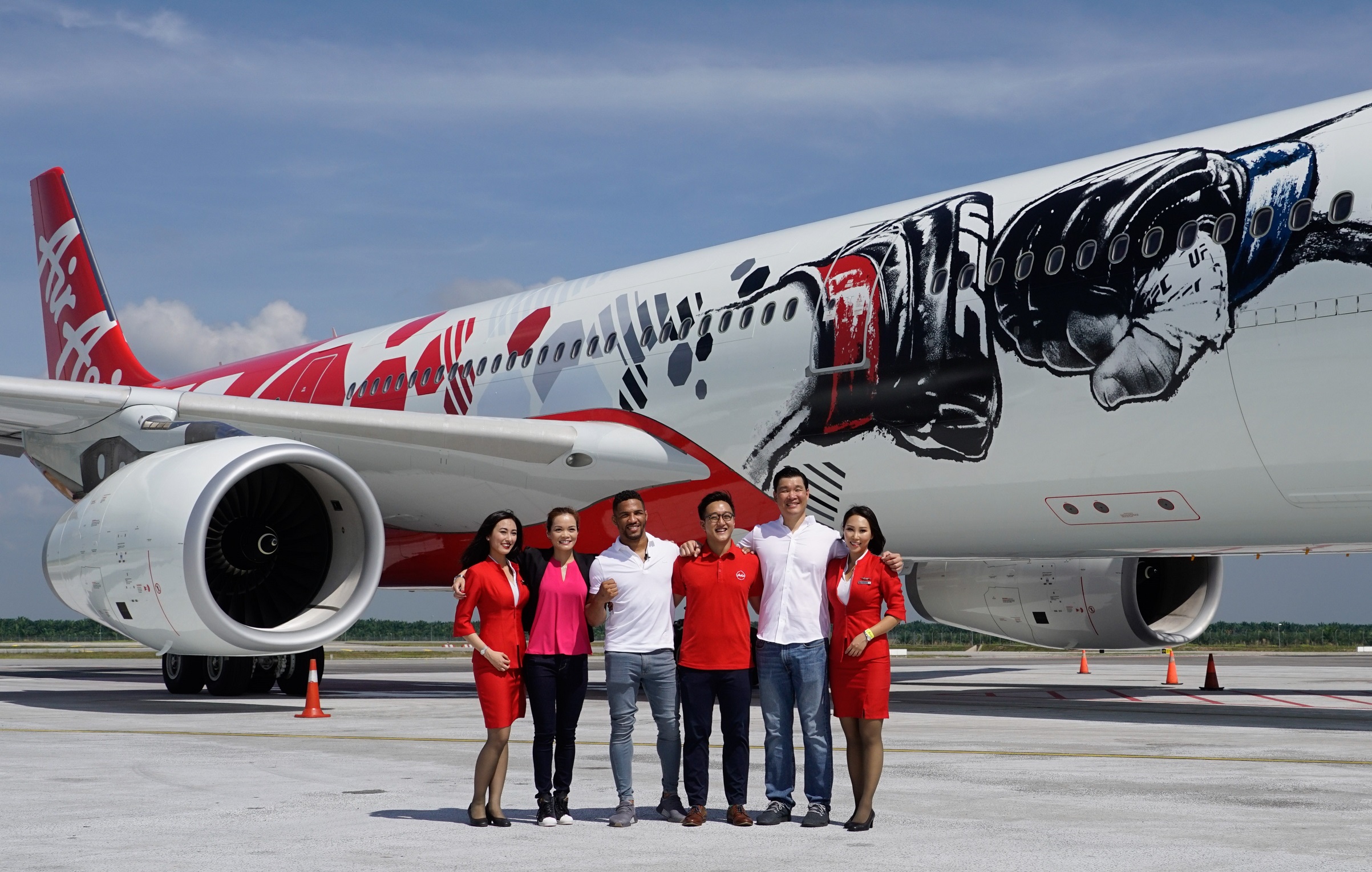 The aircraft is the first of its kind in the world to feature UFC branding and is sure to capture the attention of travelers all over the world.

“This exemplary partnership between UFC and AirAsia is a testament to the passion behind these two inspiring brands.” said UFC Vice President, International Marketing Partnerships, Rene Valencia “Today is a momentous occasion, one that we are very proud of and we look forward as travelers embark on this magnificently branded AirAsia Airbus.”

The launch was witnessed by no. 5-ranked lightweight athlete, Kevin Lee, who was in town to promote UFC® FIGHT NIGHT SINGAPORE: COWBOY vs. EDWARDS presented by AirAsia
happening on June 23. At the launch, Lee said, “This is incredible. Having this aircraft branded UFC is unreal - it’s amazing that AirAsia have taken their sponsorship integration to this level.”

AirAsia Group Head of Branding Rudy Khaw added: “We are pleased to unveil this special livery as the Official Airline of the UFC in Asia. Fight fans have been eagerly awaiting the return of UFC to Singapore, and we are thrilled to be able to present Cowboy vs Edwards for their enjoyment.”

Speaking of the launch, Vice President of Asia Pacific at UFC Kevin Chang said: “This is a special moment for our valued partner AirAsia and UFC. We’re committed to growing the brand and sport in Asia, and this collaborative partnership will continue to help us do that. We have a Fight Night in Singapore in less than a month, and this branded aircraft will add to the excitement of fans traveling there.”

Tickets to a thrilling night of sporting action at UFC® FIGHT NIGHT SINGAPORE: COWBOY vs.
EDWARDS presented by AirAsia are priced at S$378, S$268, S$198, S$148, S$98, S$68 and S$48
(prices do not include booking fee). Tickets are now available for purchase online at www.sportshubtix.sg, the Singapore Indoor Stadium Box Office, Sports Hub Tix Outlets, all SingPost locations, and by calling Sports Hub Tix Hotline at +65 3158 7888.

Additionally, fans can opt for limited UFC VIP Experience packages ranging from S$888 for Super VIP to
S$2,888 for Owners VVIP, with the very best Octagon-side floor seats. All packages include exclusive VIP hospitality in the VIP Lounge, where fans have access to photo opportunities with UFC guest fighters and the UFC Championship Belt. Select packages include a private ‘Inside the Octagon’ Tour and access to the Official After-Party.

For the latest card information or current fight news, please visit UFC.com. Bouts are subject to change.
More bouts will be confirmed as they become available.