Aiemann Zahabi started looking forward to returning to the Octagon a couple hours after dispatching Drako Rodriguez of the first round of their clash in February 2021. Instead of making an expeditious return, the Montreal native spent the last 16 months on the sidelines, working on his craft so that when the time finally came for him to make the walk again, he would be ready.

This weekend, Zahabi finally gets the opportunity to compete again, squaring off with recent Ultimate Fighter winner Ricky Turcios in an intriguing bantamweight pairing on Saturday night’s preliminary card.

“It was the best payday that I ever had, the best performance, and I wanted to do nothing but get back in,” said Zahabi, who halted a two-fight skid with the walk-off knockout victory over Rodriguez. “Unfortunately, I don’t want to make excuses, but things happened. 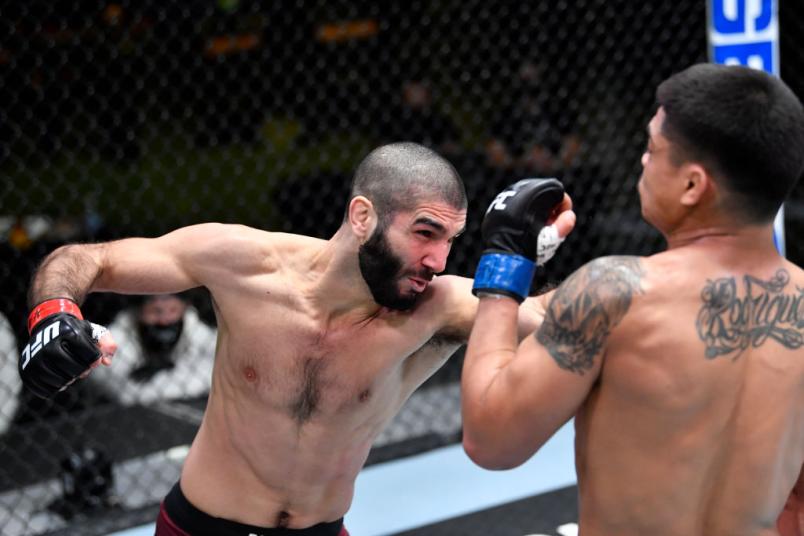 Having known each other for a number of years, I pressed for more, but the veteran wouldn’t budge, sticking to his stance on addressing whatever has kept him on the shelf since dispatching Rodriguez well over a year ago under wraps until after his fight with Turcios.

What he would talk about, however, is how this feels like the moment where everything is finally in place for him to start making a real run towards the top of the 135-pound weight class.

“This is the first time I have nothing else going on,” said Zahabi, a deep laugh chasing his words.

During the course of his UFC career, the TriStar Gym representative has trained and coached fellow fighters, gotten married, welcomed twins, and bought a house, which he did in the weeks leading up his bout with Rodriguez, unbeknownst to his older brother and head coach, Firas. 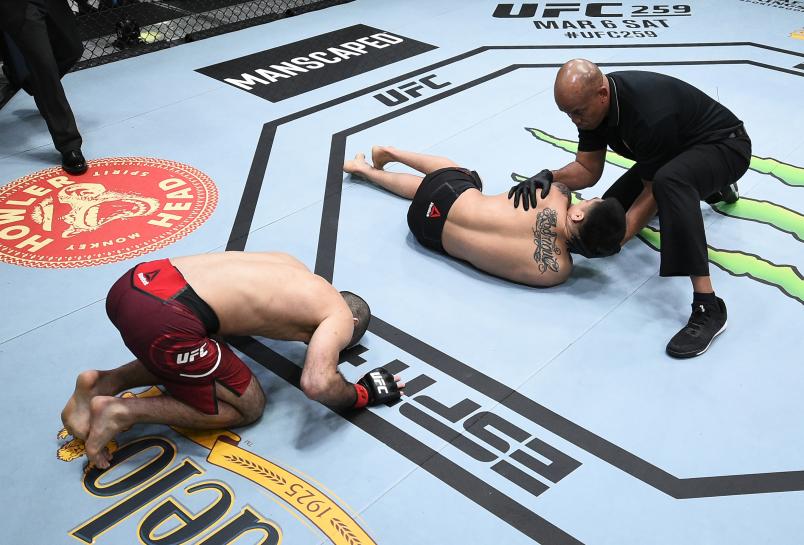 Aiemann Zahabi of Canada reacts after his victory over Drako Rodriguez in a bantamweight bout during the UFC Fight Night event at UFC APEX on February 20, 2021 in Las Vegas, Nevada. (Photo by Chris Unger/Zuffa LLC)

“I won the fight and I hadn’t told Firas,” he said with a chuckle. “We get back to the hotel and I’m like, ‘I just bought a house two weeks ago,’ and he was like, ‘Are you crazy?! You’ve been house shopping?! Do you know how much stress that is?!’

“I’m finally in a place where everything in my life is in order to where I can do it fully. I’m not begging for sponsors or handouts or help from a million people; I finally have everything in order to be able to punch out a few fights in a year.

In addition to having everything in his life outside of the Octagon squared away and at a place where he can commit all his attention to pursuing his craft inside the UFC cage, Zahabi also feels like having gone through the bout with Rodriguez and earned the result he did was a major turning point for him when it comes to dealing with adversity, discovering who he is as a fighter, and doing away with the uncontrollable worries that can often cloud a person’s mind.

“Honestly, it was my proudest win ever,” said the 34-year-old, who carries an 8-2 record into Saturday’s showdown with Turcios. “Not because of the knockout, but because I was coming off two losses in a row and had everybody against me. It was a mental obstacle that I had to overcome, and I’m happy I did because now, whenever my career does end, I can say that I’m tough and I’ve come back from adversity.

“My last fight, I really discovered who I was as a fighter and what my style is, what my strengths are, and who I want to be inside the Octagon, and I’ve built on that this last year.  It ended up coming down to the mental side of things. There are going to be a million things that go right in there, and a million things that go wrong, but the one thing is that I can’t fear the outcome.

“You can win in so many ways and you can lose in so many ways, but why would I put any effort, thought, time into (worrying about) the outcome when all I can do is deal with what I have under control?” he added. “I know it sounds super-cheesy and everybody says it, but it’s about believing it, not knowing it.”

Buoyed by watching Glover Teixeira reach the pinnacle of the sport at 42 and 37-year-old Josh Emmett post a victory over Calvin Kattar just a couple weeks ago, the 34-year-old French-Canadian feels he’s in his prime, and the time to start cobbling together wins and establishing his legacy is now, beginning this weekend against TUF 29’s bantamweight winner.

“I’m looking forward to the fight because my brother put me through hell for this one,” Zahabi said, screeching with laughter. “I’m in my prime now and I’ve got a few years to get as many fights as possible and leave a legacy in the UFC. I want to have a good run the next three or four years, and I finally have everything I need to just hit it.

“To me, Turcios’ best attribute is his conditioning — he keeps a solid pace for 15 minutes. His last three wins are all by decision, so we did some new training and adapted sparring to prepare me to go through a 15-minute war with Ricky Turcios.

“Mentally, emotionally, physically, I’m ready to go the whole 15 if that’s what I have to do,” he added. “I feel like I’m a harder hitter than Ricky, and I’ll take the knockout if I get it — that would be nice, but I’m not putting all my eggs in that basket. I’m ready to go 15 minutes and he seems like somebody that is very hard to finish, so I’ve prepared mentally for that.”

That’s the way he felt heading into his fight with Rodriguez as well, and that one lasted just over three minutes.

If a similar result should come to pass on Saturday, great, but Zahabi knows he can’t fully control how the fight plays out, so he’s simply focused on what he could control and beating the recent Ultimate Fighter winner that way.

“I’m looking to beat him everywhere because I’m prepared,” he said. “I’m going to win because of my preparation.”