Ahead of UFC 224 tilt, Cooper proclaims she's 'done with losing' 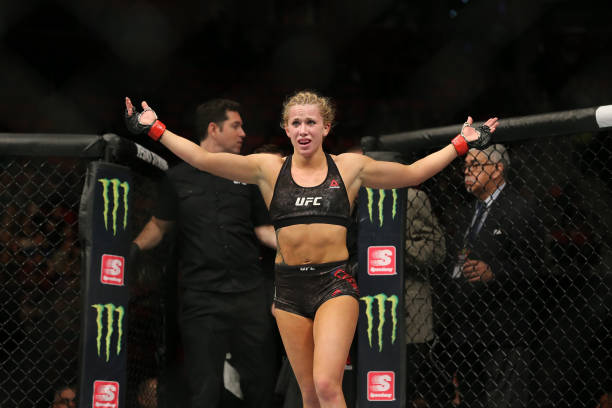 Amanda Cooper celebrates her bout against Angela Magana during the UFC 218 event at Little Caesars Arena on December 2, 2017 in Detroit, Michigan. (Photo by Rey Del Rio/Zuffa LLC via Getty Images)" align="center" />
Given the fact that Amanda Cooper has been competing in combat sports since her pre-teen years, the Michigan native had come to grips with a few fight game certainties. Training was hard. Winning was good. Losing was bad. But between her March 2017 loss to Cynthia Calvillo and her win over Angela Magana last December, she had a revelation that changed everything.

“It’s tough to have losses in your career,” said Cooper. “The more wins you have, the more confidence people have, but I also feel like if they start to lose, they’re not sure of themselves. I’ve done my losses, I’ve had heartbreak, and I don’t want it anymore. And somewhere between last year in May and December, I started doing better, I started focusing more, I started amping up my training with my coaches, and it hit me – man, this is what I’m gonna do for the rest of my life. I want to be number one. And if I never reach the top goal, everything I did, every training session, every win, every loss, every heartbreak was all for nothing.”

It’s a lot of pressure to have but, at the same time, it’s also liberating to just say: “Losing, I’m done with it.”

And if I never reach the top goal, everything I did, every training session, every win, every loss, every heartbreak was all for nothing

“It’s awesome, but it’s something I’ve struggled with,” she said. “When I got in The Ultimate Fighter, I was 1-1 and I had doubts. I said, ‘I’m a 50-50 fighter.’ I’ve lost to talented fighters, but that doesn’t make a loss feel better. Those losses suck. I’ve been backstage at a UFC crying, thinking that I was gonna be done fighting. Then you wake up one day and realize, ‘I’m not done fighting. I’m gonna be a world champion and I’m never gonna let this happen again.’ It’s a good feeling and I truly believe it. I don’t believe that I’m gonna get beat. I believe I’m done with it. I had my share of losses, had my share of heartbreak and my mind is so strong right now, I don’t think I can lose.”

If you could put a face on confidence, it was Cooper’s when she stopped Magana in two rounds. Facing a veteran foe, albeit one Cooper didn’t believe was on her level, the 26-year-old put together the most complete effort of her four-fight UFC career, and she got to do it at home in Detroit. It was the perfect homecoming for “ABC,” and when asked what could possibly top that UFC 218 night, she wondered if something would. But she didn’t wonder long.

“I’ve been trying to think of the same thing, honestly,” she laughs. “I’ve had great fights before, I’ve had great wins and great experiences and they all seem to get better the higher I go. But this was in my hometown in front of my home crowd, I had all my friends and all my family there, and it was an emotional win. I worked very hard for it, I was coming off a loss, and I beat someone in a dominant fashion in front of all the people I know.

“But I think it can be topped,” Cooper continues. “I was really confident in that fight, I didn’t think Angela deserved to be in the cage with me. I thought I was a lot better. And now with my next opponent I think I can top it.”

That next opponent, Mackenzie Dern, is the hot prospect with the perfect record and the spotlight on her as she heads into Rio de Janeiro to face Cooper on the UFC 224 main card on May 12. The odds are against Cooper, but she likes it that way.

“She’s undefeated, she’s a rising star and I’m ready to take that away,” she said of Dern. “That could be the biggest night of my life, the most emotional and most excited I’ve ever been for a fight. So I do believe it’s going to get more exciting and emotionally better for me as the fights go on.”

“Over a year and a half ago, I wrote down a goal and it was to be fighting for a world title in February of 2019,” Cooper said. “I just beat Angela Magana in December and I beat this rising star, I’m gonna start moving up the ladder and start facing higher level people. It doesn’t have to be February 2019, but that’s a goal I’ve had in my head, and if I keep on track, keep winning and keep progressing, I’m gonna get that. I’m someone who likes to set goals and reach them, so this is a perfect fight for me, a perfect opportunity and a perfect spot with a perfect opponent. Perfect doesn’t mean it’s easy, though, so I’m working really hard and training for the hardest fight of my life, which it will be.”

Perhaps being in the hardest fight of her life next weekend doesn’t scare Cooper. You don’t do this for more than half your life and get rattled by much. And one look at Cooper in the Octagon shows that, win or lose, she’s got that mean streak and that competitive fire that bodes well for her future success should she keep evolving. There have been losses to Aspen Ladd, Tatiana Suarez and Calvillo, but that was yesterday. Today, she’s on the right path to achieving a goal that she set when she needed it the most.

“I started boxing at age 10 and I didn’t believe fighting could be something I could do,” Cooper said. “My dad started a business and he was successful and my mom works for him and I thought that’s just how life is. You grow up and get a job and work and make money for other people, and if you’re lucky enough you have your own business. But I went to college and I struggled because I didn’t have anything I was passionate about.

“So I sat down with my dad one day about what’s next and he gave me some options,” she continues. “And him and my stepmom were like, ‘Well, what makes you happy?’ And I told them the only time happy is when I’m in the gym and I’m training and fighting for something. So I quit college and just started training. Then I found MMA and I fell in love with it. I’m 26 years old, but I’ve never even been in a relationship that I’ve loved as much as fighting. I love the mental struggle and I love what it does to my character as a human. It’s made me such a better person. It’s humbling and satisfying.”

Well, she’s not satisfied yet. There’s a fight coming up, and while she might be the B side in Rio, she expects to leave as the A side.

“It doesn’t matter who’s across from me,” Cooper said. “Ranks, belts, records don’t matter at that point. It’s who steps into the cage, and on May 12th, a different fighter steps into the cage. I’m training the way I need to, I’m training harder every fight camp, my mind is getting stronger, my body’s getting stronger and I’m really forming into the athlete that I dreamed about years ago.”