Aggression Is Key For Josiane Nunes

Josiane Nunes Learned A Lot From Her Successful UFC Debut And Hopes To Turn That Into Another Victory
By Zac Pacleb, on Twitter @ZacPacleb • Feb. 24, 2022

Josiane Nunes needed eight years to work her way into the UFC after starting her professional career as a 19-year-old in 2013. For her first foray in the Octagon, Nunes displayed a marauding, in-your-face style against the undefeated Bea Malecki. With a few seconds left in the first round, Nunes uncorked an Earth-shattering left hand that crumpled Malecki and, just like that, Nunes had her first UFC win.

On top of that, Nunes earned a Performance bonus for her work. Not a bad way to introduce yourself to the UFC faithful, and it was even more satisfying considering the injury-riddled layoffs that hampered the early parts of her career.

“It was really rewarding for me,” Nunes told UFC.com. “All those years of hard work paid off. I’ve worked really hard and been through a lot in order to get in the UFC Octagon. It’s a dream come true.” 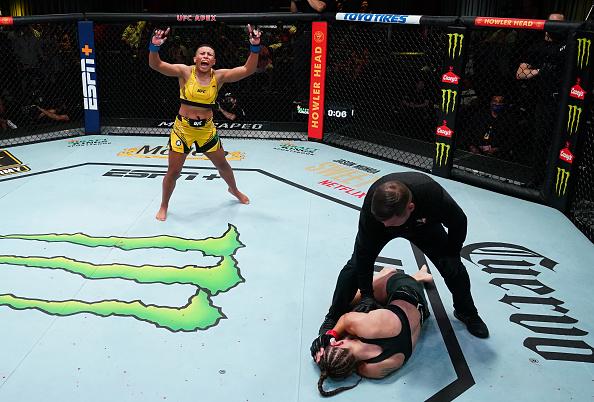 Josiane Nunes of Brazil reacts after her victory over Bea Malecki of Sweden in a bantamweight fight during the UFC Fight Night event at UFC APEX on August 21, 2021 in Las Vegas, Nevada. (Photo by Chris Unger/Zuffa LLC)

Josiane Nunes of Brazil reacts after her victory over Bea Malecki of Sweden in a bantamweight fight during the UFC Fight Night event at UFC APEX on August 21, 2021 in Las Vegas, Nevada. (Photo by Chris Unger/Zuffa LLC)

The journey to her second bout has been a little bit of a roller coaster, but nothing unfamiliar to anyone in the fight game. After a couple of opponent changes, Nunes is slated to fight UFC debutant Ramona Pascual, who most recently scored a first-round finish under the Invicta FC banner in January.

An extra intriguing element to the matchup is the fact that it is now taking place at featherweight. Although such a jarring change can negatively impact a fighter as they ready themselves to compete, Nunes is doing her best to roll with the punches.

“It affected me a little in the beginning,” she said. “I can’t say it didn’t. But I always train all areas. As an MMA fighter, I have to focus on striking, jiu-jitsu and grappling, so the focus is the same.”

The prospect of a 5-foot-2 featherweight is hard to conceptualize, but that isn’t much of a factor for Nunes. At the end of the day, it’s a fight, and coincidentally, she’s the one with the reach advantage in the matchup. 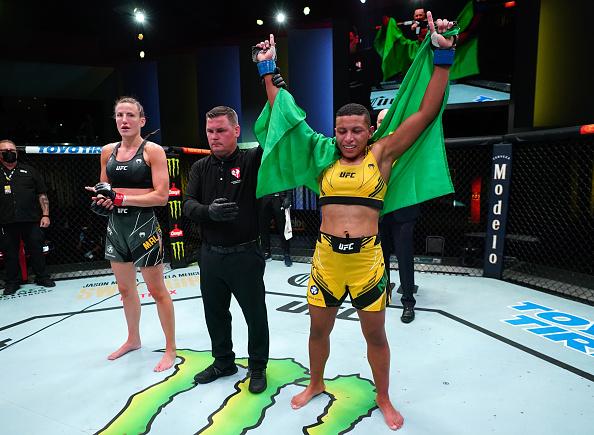 Now that she has some UFC success under her belt, she has something to lean on, even if she admits that she is “still nervous” about the fight week happenings.

“I displayed a lot of heart and perseverance (in my debut),” she said. “I also showed that size doesn’t matter. I think people talked a lot about it.”

It’s clear Nunes has a real love for the sport and the competition, and she advocates for the lifestyle mixed martial arts has provided her.

“I think people should follow this career path because it gives an opportunity to people coming from a poor background,” she said. “The people from poor communities and the favelas get to show that they can accomplish their dreams and that nothing is impossible.” 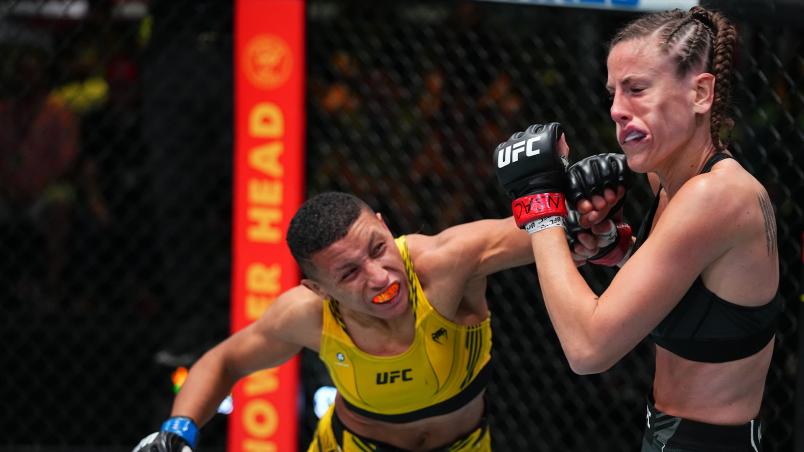 Josiane Nunes of Brazil knocks out Bea Malecki in their bantamweight matchup at UFC Fight Night: Cannonier vs Gastelum on August 21 2021 in Las Vegas Nevada. (Photo by Chris Unger/Zuffa LLC)

As far as the matchup goes, Nunes doesn’t have a particularly extensive knowledge of Pascual. A safe bet, however, is that this fight will feature heavy leather thrown. All five of Nunes’ finishes are knockouts, and so are four of Pascual’s five finishes. In fact, Pascual boasts four first-round finishes, including one coming under 30 seconds. Although the fight is up a weight class against a debutant, Nunes hopes her performance is one that gets the attention of the Top 15 at bantamweight.

Regardless, Nunes is prepared for anything. She knows, as a mixed martial artist, to sharpen her skills in every area of the sport, and she also knows her path to victory requires more than just technical prowess. At the end of the day, it’s about fighting in a way that is true to herself.