After time off, LaFlare's passion for the Octagon is back

The knockout loss to Alex Oliveira wasn’t easy to take, but that’s not why Ryan LaFlare has been on the sidelines ever since the July 2017 bout.

“You lose and it’s not the end of the world, it happens,” he said. “I lost before, but I did need to separate myself from fighting for a couple months to clear my head. I think that was the best thing. I had to miss it.”

For those who don’t put on gloves and step into the Octagon, it may be a tough thing to understand. A top welterweight with wins in six of his eight UFC bouts, the Long Islander had every reason to jump back into the fray as soon as possible and get the momentum he had lost back. Many do. LaFlare knows it.

“There are two different ways to deal with a loss,” he said. “Get out and erase the loss right away – look at Frankie Edgar. And there’s some people that go, let the smoke clear, let’s reset and go back in there. And then there are people who just never recover, and I don’t think that’s the case with me. I think I’m better than I was two fights ago when I fought (Roan) Carneiro.” 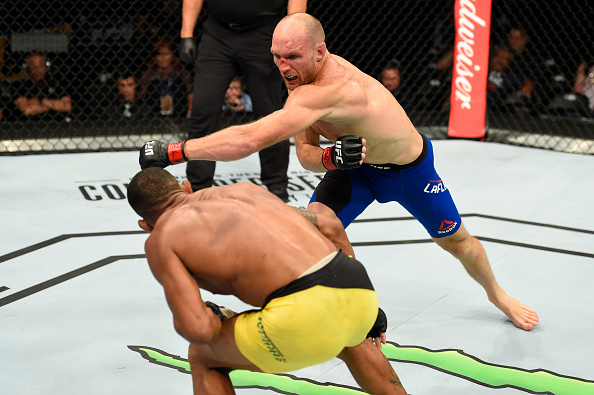 He may be, something the world will find out for sure when he returns to active duty to face Alex Garcia this Saturday in Atlantic City. But between the Oliveira fight and this weekend’s bout, LaFlare needed to recharge.

“I remember going into the last fight, I was kind of like resenting the sport,” he said. “It was more of a job, so I wanted to miss fighting again because when I was very successful, I loved fighting and I couldn’t wait to fight. Where this fight (with Oliveira), I couldn’t wait for it to be over. So I wanted to have that feeling again, and I took some time off, spent a lot of time with my kids and along the way I was still working on getting better and working on some mistakes I had been making and I corrected them. And now it’s perfect timing because I’m very eager to get back in there.”

The feelings he was experiencing before the Oliveira bout didn’t just show up on fight week. They had been building, even as he turned back Mike Pierce and Roan Carneiro following the first loss of his pro career against Demian Maia in 2015.

“I think I burned myself out,” LaFlare said. “I own a gym, I coach other UFC fighters, so I’m constantly in it, regardless of whether I’m coaching or I’m fighting. I just got worn out. Because I’m more of a mentor to (Dennis) Bermudez and Chris Wade and they both fought on that same card with me, I think I put a little too much pressure on myself, and it was the perfect storm.”

Not good perfect, but bad perfect, resulting in a second-round knockout loss to the Brazilian contender. It set LaFlare back in terms of ranking, but it also opened the door for him to take a break. Some might not get it, but LaFlare’s fellow fighters do.

“It’s like a lifelong interview,” he laughs. “‘You fight in front of millions of people? What’s that feel like?’ It’s like you’re constantly being interviewed, and I don’t think anyone will understand what I go through. But you can see it when people are just a little burned out. They don’t look the same as they did when they were young and ripe. I needed to separate myself a little bit.”

It was a move that only the wisdom of maturity could provide. I ask the 34-year-old LaFlare if the 24-year-old version of himself would have done the same thing.

“The 24-year-old version was loaded with steam and wanted to go out there and no one was telling him to stop,” he said. “Nothing was enough. I got hurt a lot because I always overtrained. Look at my resume – I fight twice, I get hurt, I fight once, I get hurt. It’s because I overtrained.”

LaFlare doesn’t resent the sport anymore, and as the months went by, he started to miss it, just the way he wanted to.

“I was coming back in, I was sparring with some guys who needed work and I felt the rhythm, I felt good, and I called my manager and said, ‘Man, I’m ready; let’s go,’” he said. “And I’ve had the best camp I’ve ever had so far. I’m going into practice eager to get better, and that’s what I love about it and that’s what I missed my last fight.”

So now that fight night is finally approaching, what did LaFlare miss the most?

“From a selfish standpoint, I miss being ‘the man,’” he said. “I miss being out there and being able to control my destiny and showcasing myself and being the focal point to my club and my friends and family. It’s go out there and kick some ass, do what you do best, and show everybody that you’re still one of the best in the world.”