After LA, Mark Munoz Hopes for a Date in Manila 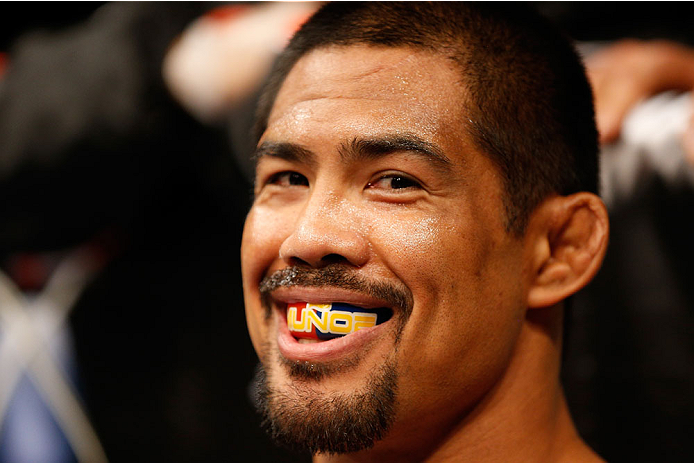 Mark Munoz is normally the most thoughtful of interviewees. There are no cliché answers or quick quips. He’ll take what you’re asking him, digest it, and come back with the best response he can.

Yet when asked about making a quick turnaround from his February 28 bout against Roan Carneiro and then coming right back to fight on the UFC’s first event in the Philippines on May 16, there is not a split second of hesitation.

“You could say a lot of thought or no thought at all went into that answer,” he laughed.

Either way, the idea of possibly fighting in Manila this spring is a no-brainer for the “Filipino Wrecking Machine,” who was over the moon when he heard the official announcement of the card at the SM Mall of Asia Arena last week.

“I was ecstatic,” he said. “I called or texted every one of my family members and I’m like ‘hey, get ready; you guys need to the Philippines.’ It’s been a long time coming, and a dream come true, really.”

No fights have been announced for the UFC Fight Night event yet, but you can assume that there will be a distinct Filipino flavor to the proceedings. And if that’s the case, you can expect the diehard fans from the nation to be out in force to support their favorites, much like they support boxing stars like Manny Pacquiao and Nonito Donaire. Truth be told, even non-Filipino fighters like Georges St-Pierre, Chuck Liddell and Carlos Condit have been treated like kings when visiting the Philippines, something the Filipino-American Munoz can certainly vouch for.

“It was like I’m a superstar,” the popular middleweight contender said of one of his trips. “I get there and the security guard goes ‘Hey Mark, make sure you stand by my side when we go outside.’ I go ‘why?’ I was unaware of everything. I get outside and there’s a big crowd of people who were waiting for me to land - cameras going off, video cameras there, people asking me for pictures. It was crazy. I had a feeling that it was going to be very fan-friendly, but I never thought it would be like that, never. And then I go to the mall with my family, just to buy some souvenirs, and I’m getting stopped every five steps. It’s pretty nuts.”

So what is it about combat sports that has prompted the people of the Philippines to embrace not only MMA, but boxing and other martial arts as well?

“It’s a part of the culture,” Munoz said. “They fought for their independence from Spain, and the life over there is about fighting because there’s a lot of adversity. With a lot of countries it’s the same thing, but fighting is such a big part of the Philippines. There are the Filipino martial arts there, people embrace that, and with combat sports, they love it. From women to men to children, the whole culture loves it.”

And nothing short of a world title fight would get Mark Munoz as excited as he would be to compete in Manila this May. Sure, there’s business to take care of with Carneiro at UFC 184, but after that, let’s just say he’s got the weekend of May 16 open on his calendar.

“It’s going to be a frenzy,” he said of that night at the SM Mall of Asia Arena. “They’re so excited, and this has been a long time coming for them. I think they get behind fighters that are in their culture and are part of their tradition and of the same blood. For me, that’s what I’m about. Even though I grew up in the United States, I grew up very, very Filipino. From the culture to the dress to the language, that’s what I represent.”