After A Full Camp, Expect Some "Thrilling" from Pat Schilling

"With his style and my style, we’re both looking to finish. He comes out like a bat out of hell and I’ve never been to a decision, and I don’t plan on starting either." - Pat Schilling 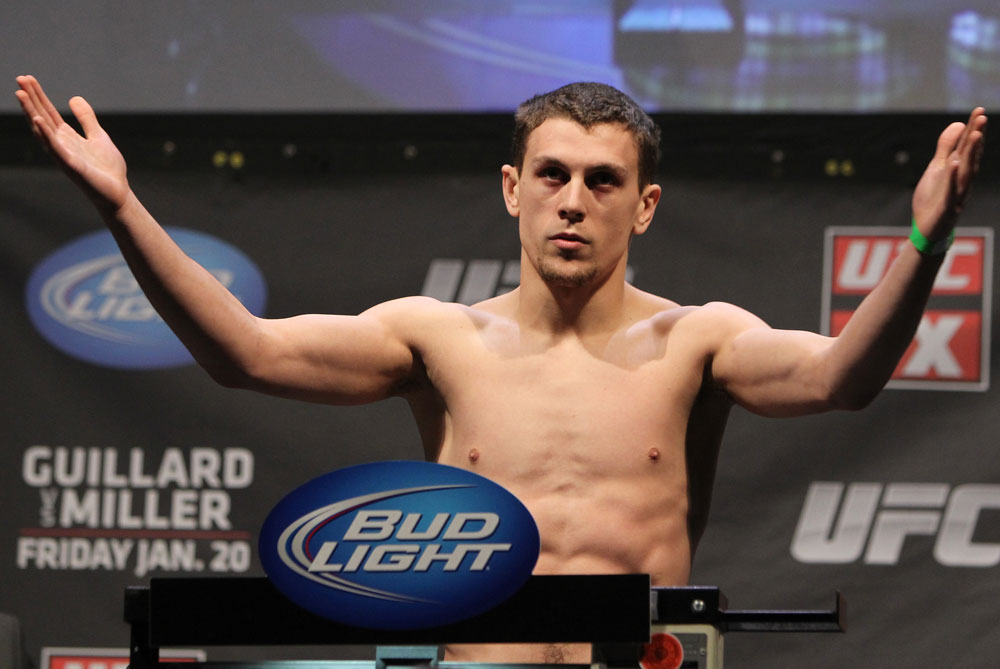 “There’s a huge difference,” admits the Minnesotan, who came in as a late replacement against Daniel Pineda in January and was submitted in the first round. “There’s a lot more preparation involved and you get the opportunity to work with so many different people, whereas with the time I had, five of those days I was at the venue, and I was in a hotel room trying to find training at the gyms close by. I trained at the Nashville gym for a while, but I was working with people I was literally just meeting, and just kinda finding out about everything going on. So everything hits you at once and never really sets in. With eight weeks, I’ve had an opponent for eight weeks, I know who I’m training to fight and what I need to do and what goals I need to set to get there, and I’ve been training where I want to, and I have everything already in place.”

You can hear the confidence in the 23-year old’s voice as he talks about the night and day difference between getting that last second call to fight in the UFC and being a UFC fighter who has had adequate prep time for his bout. It’s not cockiness, but the realization that he will be delivering a vastly different performance the second time around.

“I didn’t feel like I was super nervous or not composed,” said Schilling of his first UFC experience, “but when we touched gloves, he (Pineda) was like ‘hey, what’s up buddy’ in the cage. (Laughs) It was kinda funny, and you could tell that he did show a little bit more experience, and that’s something I have to get to at some point. You hear the different comparisons between college sports and pro sports, and that’s kinda how it is here – everything happens so much faster, and one little mistake can really change the outcome.”

Just 5-1 thus far, Schilling was dwarfed in pro experience by Pineda, but he was no babe in the woods either. Ten amateur bouts on the local circuit grew the Saint Paul native up in a hurry, so when he got the call to step up, he didn’t hesitate to say yes.

“I’ve had two opponents change the same day,” said Schilling about some of his pre-UFC experiences. “My first amateur fight was three weeks after I started training in June of ’09. At that point, I had no idea who I was fighting until maybe the day of or the day before. Even throughout some of my pro fights, there are so many things at the local level that go on where people just don’t show up to weigh ins, and there’s so much less organization and nobody really holds anyone accountable to show up because there’s not a lot of pay or anything like that. There are so many different variables going on that I would often find out that I was fighting someone completely different that night.”

So late notice was the least of his worries. And to his credit, he showed up, made weight, and just got caught by a talented opponent who was the better fighter that night. It was his first pro loss, and on Friday we’ll get to see what he learned from that defeat. Needless to say, he’s eager to prove that he belongs.

“When it comes down to it, the time that really matters is the 15 to 18 minutes I’m gonna be in the cage,” said Schilling. “Before that, there’s so much other stuff that goes on between every fight. Last time I didn’t really have time to let everything sink in, and I think now it might be even more of an advantage. I have a little more experience, I know what to expect a little bit more, and now I can focus on June 1st, getting to fight and getting to win.”

When you look at the matchup between Schilling and Holloway (who lost his first UFC bout to Dustin Poirier earlier this year), you’ve got two hard-charging, aggressive, young finishers with bright futures in the sport. It’s the type of matchup you rarely, if ever, see in boxing these days, and it’s one that can steal the show when the Octagon door shuts on Friday.

“That’s what I’m thinking,” said Schilling. “A lot of guys have to get into the big show by making their name off a veteran who may be past his prime or in a fight that really propels them further down the line. We’re both in it fighting somebody who’s essentially fighting for their job and fighting to make a statement in the organization that we’re here to stay. With his style and my style, we’re both looking to finish. He comes out like a bat out of hell and I’ve never been to a decision, and I don’t plan on starting either. I’m not a takedown wrestler who just lays on the guy; I’m always going to finish.”

And at least this time, Schilling has also had plenty of time to study his foe, though he leaves the bulk of that duty to his coaches. Still, a little knowledge can go a long way.

“My coaches do more of the tape watching,” he admits. “I’ve watched some of it to get an idea and visualize a little bit because it helps me know who I’m fighting. But as far as gameplanning and strategy, I’ve only seen a couple videos of my opponent and haven’t really looked too far into it. I know that no matter who you fight, you have to execute your game and do what you’re going to do and be good at that. He could fly, for all I know, and I’m still gonna have to beat him in this fight.”

Schilling laughs, but as he conducts this interview while sitting in the parking lot of the Best Buy he still works full-time at, he is as serious as a heart attack when it comes to his fighting career, knowing that in a wide open featherweight division, a handful of big wins can put you in the title picture sooner rather than later. That could be a scary proposition for most with Jose Aldo currently ruling the division, but for a fighter like Schilling, that’s what he lives for.

“It’s crazy to think about it, but when I’m training, those are the guys I’m training for,” he said. “I’ve got to get that good to get where I want to go. Those are the fighters who I look up to, and it would be crazy to get to fight one of those guys. A prime example is that Daniel Pineda was fighting Mike Brown (at UFC 146 last weekend). Maybe if our fight went the other way, it could have been me doing that, so it’s really interesting. That would have been a crazy experience fighting somebody who I watched on TV when I was just coming into the sport. I think someday it will happen, and I’ll be excited and I think I’ll be ready when it does.”

Even if he has to fight somebody who flies.