After finding self, Perez helps others in retirement

It’s about living your life how you want to live it. 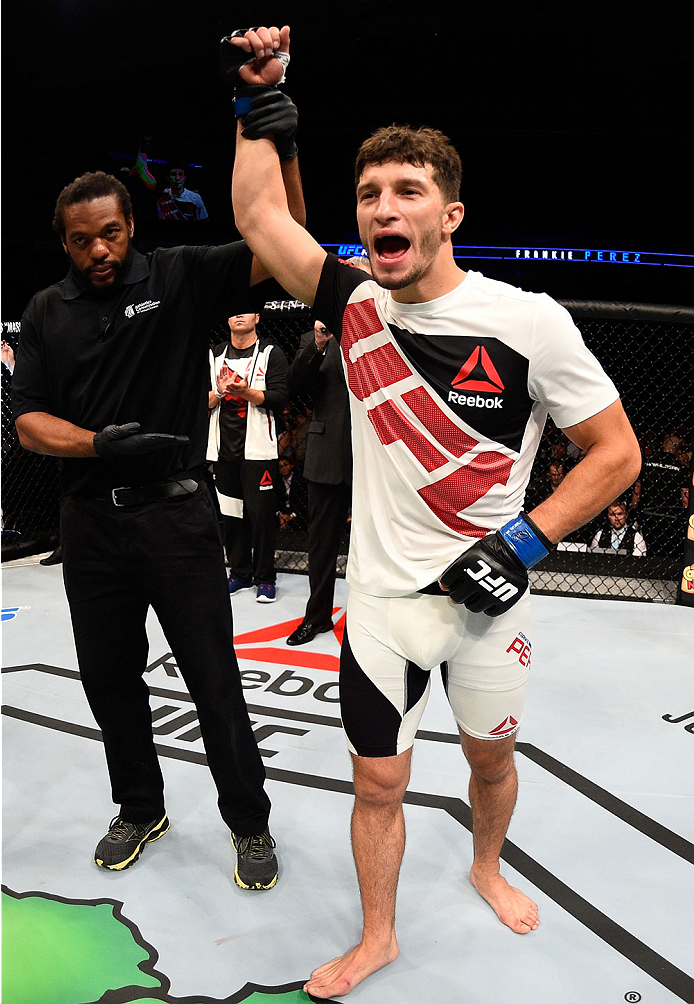 Last August in Saskatoon, a 54-second knockout of veteran Sam Stout by a young and fairly unknown lightweight prospect named Frankie Perez culminated with an impromptu retirement inside the Octagon.

To everyone’s surprise, including his coaches and father, it was the 26-year-old from Howell, New Jersey – who had just won his first UFC bout – hanging up his four-ounce gloves.

It wasn’t an easy decision for Perez, but it was his call to make and to live with and, ultimately, he was happy with it.

“It was just something that felt right,” he said. “I never second guessed myself. I’ve been doing this since I was 17 years old. I never lived a normal lifestyle but I don’t regret the life I lived. I loved the fighting and the training, but I just came to grips with it that it was time to live my life the way I wanted to live it.”

Besides improving his record to 10-2, Perez took home a Performance of the Night bonus for less than a minute’s work. The outcome was a complete 180 from what he experienced seven months earlier in his UFC debut against Johnny Case. That January night in Boston, Perez felt like a shell of himself and, in the end, was finished for the first time in his pro career. The seeds of Perez’s eventual retirement on a high note were truly sewn from those low moments earlier in the year.

“Going into that first UFC fight, it was the worst of all situations,” Perez said. “I lost two family members back-to-back and I got TKO’ed. I hit rock bottom. Going into the camp against Sam, I thought there’s nothing that could happen to make it worse. It was a clean slate for me. There was nobody that could have been in front of me that day that was going to beat me.”

Win or lose against Stout, Perez was planning on walking away, as he told his mom, his brother, his two sisters and his best friend over the phone from his hotel room in Saskatoon after completing his final weight cut. Since then, Perez followed through on that promise to himself as he took a much needed break from the life of a full-time fighter. Instead of battling guys like Edson Barboza and former UFC lightweight champion Frankie Edgar in the gym six days a week, Perez traveled, had some fun, ate too much and got to spend time with his family.

While on this sabbatical of sorts, Perez came to peace with himself and the sport and remembered why he loved it. Recently, Perez has started training full-time again with the famed New Jersey team overseen by Mark Henry and Ricardo Almeida, and right now, his focus is helping others.

Professionally, Perez is Corey Anderson’s Muay Thai coach, was Barboza’s main sparring partner ahead of his UFC 197 win against Anthony Pettis and is teaching MMA classes at Nick Catone’s gym in Bricktown. Personally, Perez has become involved with a different fight – one against muscular dystrophy with Jim Raffone and his charity, JAR of Hope.

“Jim’s son was diagnosed with Duchenne muscular dystrophy, which is the rarest and most aggressive form,” Perez said. “And there’s no cure. Jim had been trying to get a hold of me to train him to fight. He really wants to do an exhibition fight to raise money for his son and this research that he’s investing in. We finally sat down and he laid everything out for me and I couldn’t say no. His son is basically dying in front of him and he’s trying anything he can to save him.”

Over the past year, Raffone and his seven-year-old son Jamesy have become celebrities in Monmouth County. Through JAR of Hope, Raffone, a father of three, has raised over $240,000 for research into the Duchenne muscular dystrophy that afflicts his son. Once a bodybuilder and personal trainer, he is doing everything he can think of to raise money to help combat his son’s degenerative disease and hopefully find a cure, from competing in push-up contests and running marathons to training for an amateur MMA fight.

"I’d like to thank the UFC for giving me the opportunity to put me on a bit of a pedestal to get my name out there and help organizations like (JAR of Hope) and bring some traffic their way." -- Frankie Perez

“He’s an incredible individual,” Perez said. “He’s not a young guy, but he is athletic. He runs these marathons like it’s nothing and goes back to work the next day. He doesn’t have any quit in him. I call him the ‘2016 John Q.’ He’s just an average guy who is willing to do anything to save his son. If helping him get ready for an amateur MMA fight is what he wants from me, then let’s do it.”

Their sights are set on an October debut for Raffone, and Perez has also enlisted fellow UFC veteran Dante Rivera – who is Raffone’s BJJ coach – to aid the cause.

“We’re giving Jim as much time as we can to raise as much money as we can to save his son’s life through JAR of Hope. I’d like to thank the UFC for giving me the opportunity to put me on a bit of a pedestal to get my name out there and help organizations like Jim’s and bring some traffic their way.”

Along with JAR of Hope, Perez is taking a cue from Raffone and he plans to raise money through his family’s Dead Serious MMA Promotion for multiple sclerosis research, as Perez's sister suffers from the disease. And on June 11, Perez will be lacing up a different type of gloves, as he will compete in a kickboxing bout as the main event for World Class Kickboxing Championships in North Bergen to raise money for JAR of Hope and the National Multiple Sclerosis Society.

In retirement, Frankie Perez's life is as physically demanding as ever. But with a renewed focus on helping others, he has the motivation to keep grinding.

More from 'After the Octagon' Series: