After Epic Debut, Sarafian Preps for an Even More Exciting Encore

"This is what I always dreamed of doing, and whether winning or losing
I'm always going in there to give my best and leave it all there until
the very end of the fight." - Daniel Sarafian 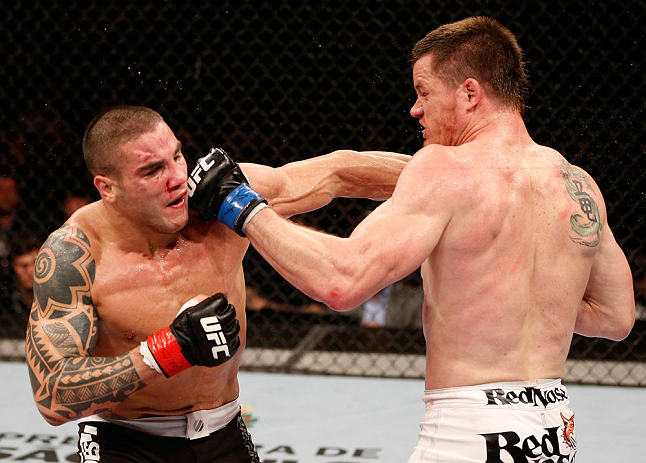 The wait from 2006 to 2012 was long enough for Daniel Sarafian as he hoped to hear his name called to compete in the UFC. But when an injury took him out of the Ultimate Fighter Brazil 1 finals and put him on the shelf for another seven months, that’s when a fighter's waiting can turn into doubt, hampering his performance when he finally does get to compete in the world-renowned Octagon.

But if it did, you wouldn’t have known it watching Sarafian engage in a three round war with CB Dollaway in January, earning both middleweights Fight of the Night honors. It was as impressive a performance that a debutant could deliver without getting his hand raised, and while he was disappointed with the final split decision verdict, he was happy to get his first UFC fight out of the way and emerge relatively unscathed,

“To be honest with you, I don't think I could tell before the fight that I was more nervous than usual, or at least I tried not to allow that to happen because I figured it was a big step and tried to prepare myself for it,” said Sarafian through manager / translator Eduardo Alonso. “But as much as you prepare, there are things where experience always helps, and I had a lot of things to deal with for a debut: coming from a long time out of the cage due to injury, surgery and physical therapy, being known by fans because of TUF Brazil and carrying expectations, fighting in my hometown in the co-main event, and being sponsored by the UFC apparel brand. I think considering all that, I handled it well with the help of my team, but I feel more comfortable having gone through that already.”

When you hear all that, you wonder how the popular Sao Paulo native even made it to the cage. But along with his team, Sarafian used the experience gained through 10 previous pro fights and a stint on TUF Brazil to get through the jitters and deliver a performance that he looks back at with pride, but also with the knowledge that next time he’ll be even better.

“I think it was a great experience,” said Sarafian. “Dollaway is a tough fighter and already very experienced, and he was in several tough fights in the UFC before, so I learned a lot from this fight. I think I did well overall, but in certain moments his experience helped him to make the best of those moments and that got him the win. I think our strategy was working well when I had a good first round, and then maybe I got a bit too anxious and stepped away from the strategy and he took advantange of it. From there on it was a war. That's where experience plays a big part, and I'm happy that I could keep myself in the fight even in the tougher moments. In the end it was very close, and I learned a lot.”

Boos greeted the final decision, not a surprise being that a Brazilian lost a close fight in Brazil, but it wasn’t just the local fans doubting whether Dollaway deserved the nod. All around the internet, social media sites lit up with support for the 30-year-old TUF Brazil finalist, who appreciates the fans in his corner while realizing that what’s done is done. All that’s left from that fight are the lessons he needs to learn to move forward.

“It was a very close fight, and I think maybe since it was in Brazil people expect the hometown fighter to get the nod in those kind of fights,” he said. “But it is what it is; it was really a very tough fight and it could have gone either way. It's not easy to digest because it's something you want so much, and you work so hard to get. When you get so close and end up not winning you think about a lot of stuff - some stupid and some good stuff (Laughs). It's important to take away the lessons you need to learn, and pick up what's positive to build from. I have a good team around me, people who have seen it before, and soon we were working again and moving on. In this game you have to always focus on the next fight.”

That next fight takes place this Saturday in Fortaleza, where Sarafian will return to the main card to battle the United States’ Eddie Mendez. It’s another prime spot in which the Brazilian can shine in front of his home country fans, and he embraces the opportunity.

“You have to focus on the good side of everything,” he said. “If there is added pressure because of the attention I'm getting and the popularity we’ve got, there are also a lot of good sides to it. As a professional fighter we work hard to get to this level, and when you have extra pressure due to status it also means you're going to the places every fighter works to be at. So I take it as motivation and a source of confidence.”

After his showing on TUF and in his debut against Dollaway, Sarafian has cemented his place among the next wave of Brazilian fighters looking to make noise in the coming years like his predecessors Anderson Silva, Jose Aldo, “Shogun” Rua, Lyoto Machida, Junior dos Santos, and Wanderlei Silva have already done. That’s a big responsibility, especially considering that the sport is getting even bigger in Brazil.

“I think MMA is going to continue to grow in Brazil, and with the UFC doing more shows here now, the tendency is for it to keep hot for a good while,” he said. “Brazil has a lot of great MMA fighters, and the fans like to support a sport where their country wins, so that made MMA an easy fan favorite here after UFC exposed the sport properly to the masses. With the media support and new young fighters developing through TUF Brazil and other shows, people are going to still be interested. As MMA Brazilian fighters, we fought abroad for so long, that is good to be able to fight for our fans for a change.”

With such success comes more demand from the rest of the world as well. So when will Stateside fans get another chance to see Sarafian, who lived in the States for a spell and even fought three of his first five pro fights in the US?

“Good question, ask (UFC matchmaker) Joe Silva and (UFC president) Dana White,” he laughs. “I also fought in the Philippines earlier in my career, and I lived in the US for about one year. It's a privilege to fight for the UFC and being able to fight in your country is great. The support from the fans here in Brazil is awesome, but I would welcome a fight in the US sooner or later. I think it's an important part of the development of a fighter as well, because if you go up, sooner or later it will happen. But it's a matter of time, and if I have to fight more times in Brazil I'll love it as well and I’m not gonna be the one complaining.”

Sarafian laughs, comfortable in the growing spotlight while still keeping in mind the importance of staying focused on his fighting. For him, the autographs and media appearances are nice, but they pale in comparison to his true love.

“Fighting is what I love, and I chose this profession because of it,” he said. “This is what I always dreamed of doing, and whether winning or losing I'm always going in there to give my best and leave it all there until the very end of the fight.”