"I came here to win and I will win. I’m going to knock him out.” - Cheick Kongo 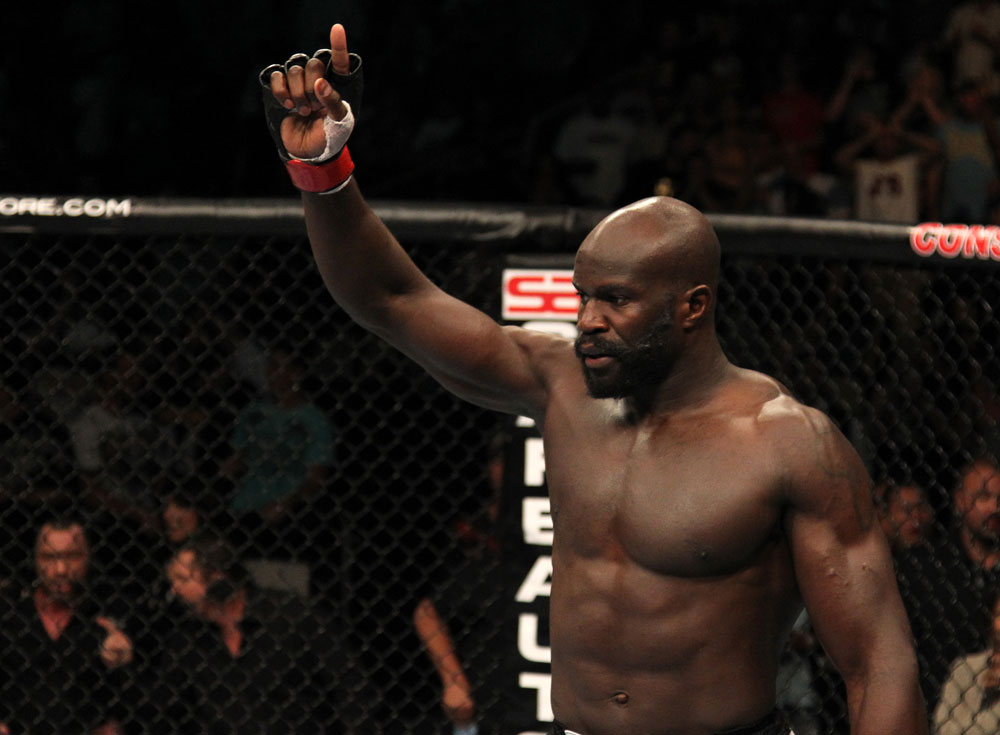 Frank Mir tops all heavyweights with 18 UFC appearances over the past decade. The big man with the second-most Octagon performances? Believe it or not, the distinction belongs to Mr. Cheick Kongo. The striking specialist has been under the Zuffa umbrella longer than world champ Cain Velasquez, longer than No. 1 contender Junior dos Santos, and longer than Shane Carwin, Mirko Cro Cop and Antonio Rodrigo “Minotauro” Noguiera, among others.

The sculpted Frenchman battles former NFL player Matt Mitrione this Saturday in what will mark Kongo’s 15th foray inside the sport’s most celebrated and symbolic cage. And none of the 36-year-old’s appearances was more exhilarating than his unforgettable 159-second scrap against Pat Barry, who had twice dropped Kongo with punches and immediately charged his equilibrium-challenged prey in search of the finish – only to be flattened unconscious by two thunderous and desperation right hands that he never saw coming. The improbable ending of that June tussle stands as one of the sport’s most dramatic comeback victories ever, forever worthy of a place in any highlight reel, and served notice that Kongo may not be the “gatekeeper” some presume him to be, but may in fact still be marching toward the title shot that has long eluded him.

“If I get the chance to fight (for the title), I would be happy,” said Kongo, typically a man of few words during interviews and 9-4-1 overall in UFC bouts. “I know the line is very long, but hopefully, yes, I would like to fight for the belt as soon as possible.”

It was Kongo, you might recall, who gave unbeaten heavyweight kingpin Cain Velasquez his toughest challenge to date. Kongo is the only fighter that Cain wasn’t able to stop inside the distance. All the other Velasquez victims succumbed under a relentless hail of punches, and only Kongo somehow weathered the storm in the 2009 showdown – and a hellacious storm at that. Cain, beastly wrestler that he is, ragdolled and pounded the 240-pound Paris native for almost the entire 15 minutes. So overwhelming and one-sided was the abuse, it was dubious whether Kongo would survive the first round. Yet Kongo showed exceptional resilience and became the only opponent to wobble Cain with punches (exposing at the time an apparent chink in the younger Cain’s armor which included a lack of head movement and failure to adequately set up his takedowns with strikes).

Mitrione (5-0) certainly doesn’t present the brute force that Cain does (who can?). But the engaging character is a former collegiate and professional football player in possession of a silver tongue, top-flight athleticism and the kind of fighting instincts that can’t be taught. The Purdue graduate is a hard-hitting 260-pounder who seems to grow leaps and bounds with each passing month both in standup and on the ground. But, by his own admission, he has never fought anyone as dangerous or “crème de la crème” as Kongo (26-6-2). Obviously, this is a huge litmus test for Mitrione, and a win for him boosts his stock considerably.

“Everyone gets a chance to face someone famous,” Kongo said. “It’s a good thing for him. Matt is a likable guy and has done well so far; I respect him as a fighter and expect for him to give a good fight. Ultimately, he's going to be ready for the bout. I’ve fought for so many years and been so careful.  I learn a lot from my last mistakes and I will do my best. But 40 fights, yes, that's something greater so I am greater here (in experience). He's in great shape. Let's see. So I wish him good luck next Saturday.”

Mitrione, who has trained with Neil Melanson, Rashad Evans and Jake O’Brien for this fight, has been equally respectful of Kongo, but finds the matchup favorable.

A reporter asked Kongo if there was anything in particular about Mitrione that concerns him.

“Well, I don't have anything to say about that,” Kongo said. “I’ll be aware of his boxing, jiu-jitsu and wrestling. In the last fight (against Barry), I guessed incorrectly and he was on top of me. He surprised me and I didn't expect it. Now I'm getting better. And I'd just like to be better for the next time, everybody improves. I came here to win and I will win. I’m going to knock him out.”

“Matt brings it,” Jackson reasoned, “and Kongo ain’t scared to bring it.”