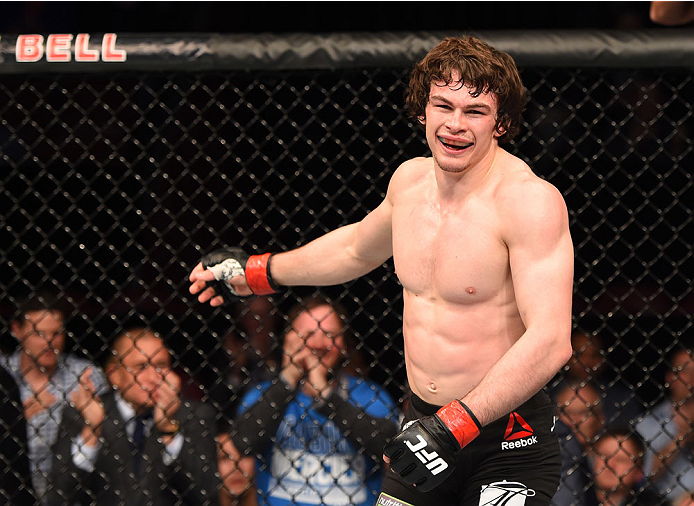 Nearly two years into his UFC career, Olivier Aubin-Mercier may have figured things out. That’s not exactly what opponents like his Saturday foe, Diego Ferreira, want to hear, but “The Quebec Kid” wasn’t going to be a rookie forever.

“The first fight with Chad (Laprise), I was somewhere else, and then the fight after was better and the fight after that was better. And in my last fight I was able to think, maybe for the first time. (Laughs) I’m pretty happy with what happened this past year, especially with my experience.”

The Laprise fight in the TUF Nations finale resulted in Aubin-Mercier’s first and only pro loss, but since then, the Canadian prospect has won three straight, submitting Jake Lindsey and David Michaud and decisioning Tony Sims. In the Sims fight, Aubin-Mercier didn’t get the finish, but he showed to be comfortable in his own skin in the Octagon, a key for him to take his game to the next level.

Another key is facing tougher and tougher stylistic matchups, and Ferreira certainly fits the bill. But while some fighters might get rattled by a late replacement opponent who is a Brazilian Jiu-Jitsu black belt, Aubin-Mercier actually likes this fight more than the original one with Joaquim Silva.

Another change for OAM that he considers another non-factor is that this will be the 26-year-old’s first fight outside of Canada. But after a few trips across the river to New York with his girlfriend over the years, he’s used to – and likes – the area, and if anything, there might be less of a spotlight on him in the States, which is just fine with him.

“I don’t think it changes a lot of things,” he said. “Maybe I have less pressure than in my other fights. Other than that, it’s the same thing.”

It’s not the same though, as Aubin-Mercier sounds more confident and comfortable than ever, and it’s not one fight that flipped the switch. It’s just time.

“When I was 13, I was in judo and I was getting my ass kicked in training every day in the beginning,” he said. “That happened for a long time actually, and at some point I just became better and better. And when you become better, you try to go to a bigger gym. So you always start again. With Tristar, I think I had trouble because of all the great fighters over there, but now I took my place, and I’m probably one of the best over there, I think. For me, it’s always motivating to see new people come in to Tristar – really good jiu-jitsu players, really good stand-up players, really good wrestlers. I can find somebody that can beat me up in every part of the game. And I don’t think that’s something bad, I think it’s motivating. It’s always good to see how you can be.”

Only a fighter will call getting beat up a good thing. Aubin-Mercier laughs.

“The way they do it at Tristar, it’s really respectful,” he said. “And yeah, for sure they’re going to beat me up, but they won’t try to hurt me and that’s a good thing.”