Adriano Martins: Gearing Up for the War 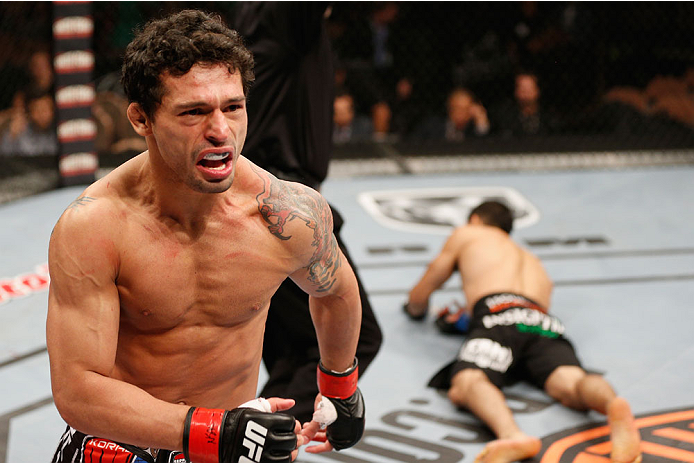 If not for a January 2014 loss to Donald Cerrone, Adriano Martins might have been the Brazilian facing off with Anthony Pettis at UFC 185 in Dallas next month instead of Rafael dos Anjos. That’s all speculation of course, but consider that a Martins win over “Cowboy” would have made it seven victories in a row for the Manaus native. Add a couple more victories, and voila, title shot.

That’s the What If game, and Martins doesn’t play it.

“Losing is part of the game,” he said of his first defeat since 2011. “We have to be mature enough to understand that we made mistakes somehow and that's why the result was not positive. I am mature and I didn't need to get over it because I understand that if I want to be among the best of the division, I need to make some changes.”

Martins isn’t just talking either. In July, he returned to the Octagon and didn’t give Juan Puig a chance to make him relive the Cerrone bout, as he knocked out the Mexican prospect in the first round, earning a Performance of the Night award.

“I was very happy to be able to show my work and it was very gratifying to receive the bonus,” he said. But the real changes may show up Sunday night against Rustam Khabilov, as the 32-year-old supplemented his usual training at home with a trip to the American Top Team gym in Florida, where he got even more top-notch instruction and mat time. That work, along with his existing skill set, has Martins more confident than ever of his place among the 155-pounders.

“This is a very competitive division,” Martins said, “although I see myself among the best.”

A Jiu-Jitsu black belt and Judo brown belt with a finisher’s mentality on the feet and the mat, Martins isn’t deluding himself. And though just 2-1 in a UFC run that began in late-2013, he earned post-fight bonuses for both victories, and it’s clear that he has the talent to succeed. This weekend’s bout should tell the tale though, as the number 14-ranked Khabilov isn’t one for niceties in the Octagon. He shows up to fight, and if you’re not ready for him, he’ll find it out sooner rather than later. Martins isn’t one to be intimidated by anything that happens in a fight though.

“With all respect, he (Khabilov) is a great fighter and a very tough opponent, but I don't see any difficulties in fighting against him.”

You don’t hear that too often from prospective foes of Dagestan’s “Tiger,” but having come up the hard way, Martins has seen worse.

“I don't have problems facing difficulties,” he said. “My life was never that easy, so I guess if it had been easy, it would not have been worth it for me.”

In other words, Martins didn’t lock himself up in a dark room after losing to Cerrone a year ago. He just used the setback as fuel to get stronger.

“A loss will not take me off track,” he said. “I lost a battle, not the war, and I am totally focused for my next goal...to be the best in this division.”