Rising UFC Bantamweight Adrian Yanez Is Loving Every Step Of His UFC And Personal Journey Coming Into UFC Fight Night: Kattar vs Emmett
By Thomas Gerbasi, on Twitter: @TGerbasi • Jun. 17, 2022

Pursuing his career as a professional mixed martial artist requires a minimum of three hours a day on the road for Houston’s Adrian Yanez. That’s a lot, especially considering that in between each trip, the bantamweight prospect is getting punched in the face, having his limbs twisted and doing it all in miserable Texas heat.

But you won’t hear Yanez complaining because he’s chasing a dream of becoming the best 135-pound fighter in the world, and most importantly, taking care of the newest mouth to feed in house – his six-month old son.

“Waking up to him in the morning and being able to get him ready gets my day going,” said Yanez. “It's something that makes my day so much better and it makes my training so much better. I have a lot less days where I've been like, ‘I don't want to do this today.’ And it's always been in the back of my mind that I'm the provider; I have to go out there and do this.”

And he’s loving it. You can hear the change in the tone of his voice when he talks about fatherhood, and while dropping him off at daycare in the morning and then returning home after training to find him asleep is tough, on weekends and when their schedules do mesh, the bond is already there.

“It's weird, but I feel like we both understand that we don't really get that much time with each other, so when we're with each other, it's never a dull moment,” Yanez said. “It's always fun for the both of us. Just those little key moments have been amazing for me. To see the smile that I get, I'm loving this dad life.”

Any father worth his salt will tell you that there’s never enough time for your kids. And Yanez takes advantage of every precious moment he gets, something he learned from his own parents.

“I was fortunate enough to have a great role model in my dad,” said Yanez of his father, Andres, who passed away in 2016. “You're supposed to spend time with your kid and both my mom and my dad did the most that they could. I was blessed to have that, and I'm just relaying that down how I know best from my mom and dad, and it makes it so much easier for me knowing how I'm supposed to be doing things.” 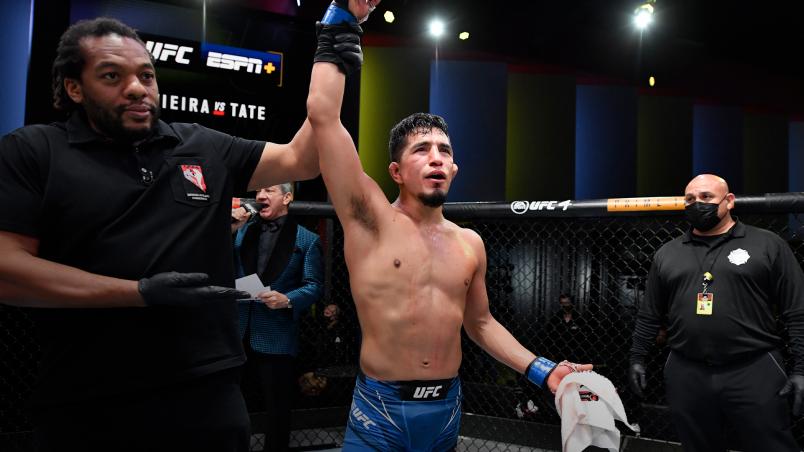 Adrian Yanez reacts after his victory over Davey Grant of England in a bantamweight fight during the UFC Fight Night event at UFC APEX on November 20, 2021 in Las Vegas, Nevada. (Photo by Chris Unger/Zuffa LLC)

Yanez, 28, has been doing things the right way for a long time now, both in and out of the Octagon. So when those worlds collided after his November 2021 win over Davey Grant, he did the right thing again, putting a momentary halt on his four-fight, four-win, four-bonus UFC streak to the side to make sure he was there with his lady for their son’s birth in December and first few months.

“I took some time off after my fight with Davey for a lot of reasons, but that was another reason,” he said. “Maybe two and a half weeks after the fight he was born, so good thing I did end up taking that time off because I was there through the last steps of his mom's pregnancy, so that was also a pretty good bonding experience.”

On Saturday, Yanez returns to the Octagon to meet Tony Kelley and look to extend his overall win streak to nine, but don’t think he’s been sitting around changing diapers and watching Cocomelon since last December. He’s been training, he’s been coaching, and he’s been waiting to get the call to fight in his home state of Texas for the first time since his November 2019 win over Kyle Estrada. He’ll have some special visitors in the Moody Center Saturday night as well.

“My first fight back in Texas is gonna be my first fight with my family here,” said Yanez, whose first four UFC bouts have been in the UFC APEX in Las Vegas. “It's gonna be me, my son, my girl, my mom, my brother in my corner, my family that hasn't been to one of my fights since I fought in LFA. This is crazy to me and I'm super excited and super happy. It feels like it's all coming together very, very nicely.”

Just like his fight career, where he’s been dazzling, devastating, and downright gritty at one time of another in beating Victor Rodriguez, Gustavo Lopez, Randy Costa and Davey Grant. The Grant fight was particularly revealing in that he proved he can win a tough, close battle and not just blast foes out in a round or two. Of course, Yanez prefers the blast out part, but he’s glad that he was able to show some new dimensions to his game.

“I'm always disappointed when I don't get a finish,” he said of the Grant bout, which he won via split decision, earning a Fight of the Night bonus in the process. “A finish, to me, is always really definitive and it makes it more of a statement. A split decision sounds like you're barely winning, and I really don't like to barely win. If we're playing basketball, I want to beat you by 30 points. I don't want to beat you just by a game-winning shot; I want a blowout every single time we go out there. But I do realize that it was one of those moments where just with the adversity that was around that fight, just the fact that I was able to deal with what I was dealing with before that camp and going into that fight and have the performance that I did against a person who's a super tough guy and can put anybody's lights out at any given moment and get the victory is a phenomenal job in itself. But I'm always striving for some type of perfection, and I'm not satisfied with that type of a victory. I'm always looking to get a finish and a definitive win.”

The adversity Yanez is referring to is the death of his beloved coach Saul Soliz last summer. The Grant fight was his first since the respected Soliz’ passing, but Yanez passed that test in a fitting tribute. Now the circle of life continues, with Yanez now the father to a son who probably won’t remember what happens this Saturday, but it’s going to be a pre-Father’s Day this fighter won’t ever forget.

“I have no pressure,” Yanez. “I look at it as a blessing. I felt a lot happier these last couple months than I've probably felt in the past six years. I'm the most happy I've been, and my motto for the last six months has been living, loving life. I haven't had too many bad days; all of my days have been good and there's no reason for me to have a bad day.”