He Was Just A Kid From Houston Whose Combat Sports Dreams Were Ignited By Cain Velasquez, But Now Adrian Yanez Gets To Be A Role Model Of His Own
By Thomas Gerbasi, on Twitter @TGerbasi • Oct. 14, 2021

When it came to combat sports, Adrian Yanez was all-in. For boxing.

“I didn't necessarily like watching MMA when I was growing up,” said the bantamweight prospect. “I was watching boxing all the time and I was the biggest boxing fan. I would have arguments with people, saying boxing was way better than MMA. MMA is a bunch of weirdos, a bunch of grown men rolling around in their underwear. I would make that argument so hard.”

Don't Miss Any Of UFC Fight Night: Ladd vs Dumont

Yanez laughs, but he wasn’t laughing when he saw a replay of Matt Hughes’ knockout of Carlos Newton on the Ultimate Knockouts show. 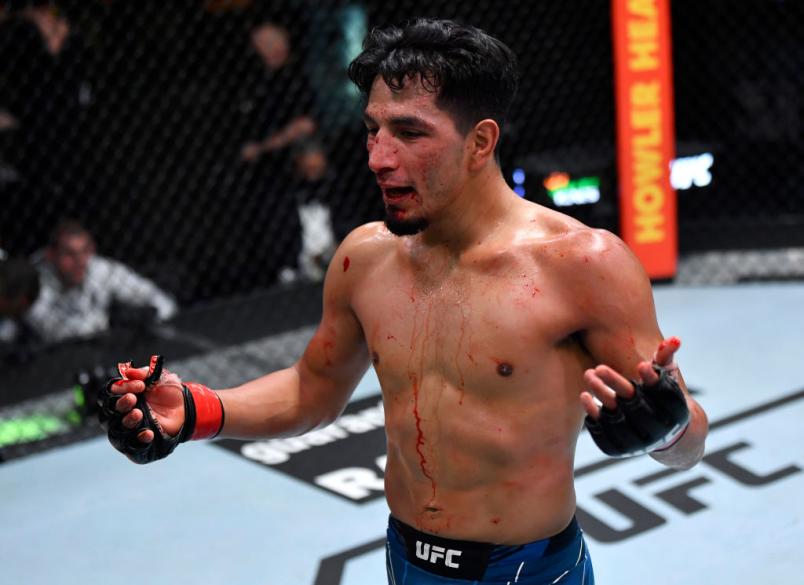 “I saw him slam Carlos Newton and knock him out,” he said. “That changed my whole perspective on MMA. So, they can knock people out, too; I thought that was pretty cool. Then I started watching it and watching it, and then I got to try my first jiu-jitsu and kickboxing class and it took over from there.”

Yanez would have his first fight in his new sport at 17, turn pro in 2014, and a little over seven years later, he’s one of the top prospects in the sport, regardless of weight class. On November 20, Yanez will look to make it 4-0 with four finishes in the UFC when he faces British vet Davey Grant in a fight the 27-year-old believes is a can’t miss.

“There's gonna be a lot of chaos and a lot of openings that I've been liking and I'm gonna see,” he said. “It makes all the happenings for either a Performance of the Night on my end or a Fight of the Night.”

Houston’s Yanez has come a long way since his early days in the sport, but while it’s only been within the last 15 years that a large number of Hispanic fighters have started to have the success that they historically have in boxing, Yanez did have some good role models both near and far.

“The one fighter that I always looked up to was Cain Velasquez,” Yanez said of the former UFC heavyweight champion. “Just seeing him at the time I was actually training gave me a sense of inspiration because somebody that looks like me is fighting in the UFC. 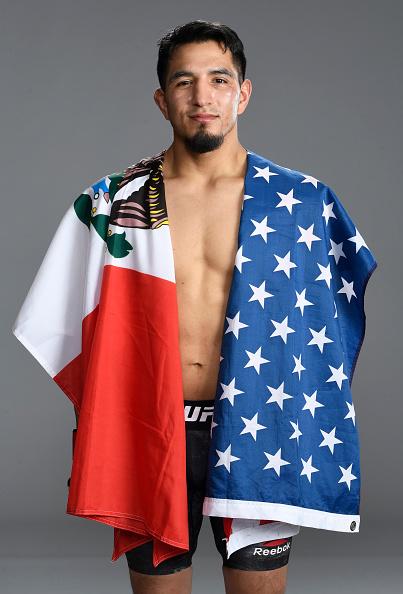 Adrian Yanez poses for a portrait after his victory during the UFC Fight Night event at UFC APEX on March 20, 2021 in Las Vegas, Nevada. (Photo by Mike Roach/Zuffa LLC)

Closer to home, Yanez made sure he caught all the Legacy FC cards he could, because there, he got to see even more fighters who shared his Mexican American heritage attempting to fight their way to the big show.

“They (Legacy FC) had a lot of great Hispanic fighters, too, and a good one that I would always see coming up, he's a Houston guy, too, was Daniel Pineda,” he said. “I was there when he won the title for Legacy. I was there for a lot of his fights and that was a lot of inspiration, too, because I saw a guy who wasn't at the UFC level yet working to get there, and then he finally got his shot and goes on a streak. Unfortunately, he got cut, but now he's re-signed with the UFC and that's pretty cool to see how hard he had worked, got cut and worked his way back into it.”

In August of 2020, Yanez made his leap from the regional circuit with a 39-second TKO win over Brady Huang on Dana White’s Contender Series that earned him a UFC contract. Three more knockouts, all Performance of the Night bonus winners, over Victor Rodriguez, Gustavo Lopez and Randy Costa, made him a rising star at 135 pounds. And perhaps even more important, Yanez may be the Cain Velasquez for some kid hoping to become a pro fighter one day.

“I fully embrace it,” he said of being a role model. “It's pretty cool that we have a little bit more representation now and I'm happy to represent. It's amazing because now that the sport's actually getting a little bit bigger and we're starting to get a little more international, I love all the integration. Just the fact that I'm a Mexican American and fighting in the UFC, it's cool. I get to represent my family every time I go in there, and it's a proud moment for me.”

And no pressure, either. 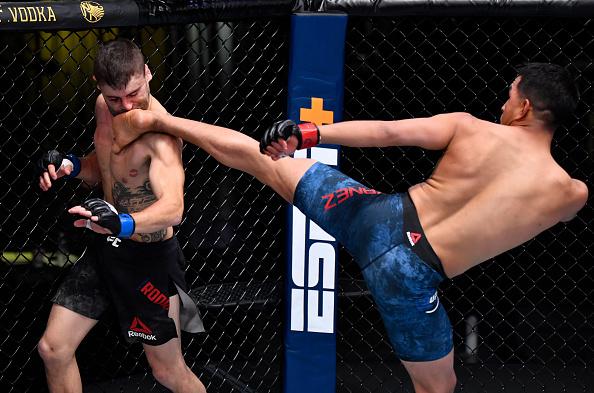 Adrian Yanez knocks out Victor Rodriguez with a kick in a bantamweight bout during the UFC Fight Night event at UFC APEX on October 31, 2020 in Las Vegas, Nevada. (Photo by Jeff Bottari/Zuffa LLC)

“It's not any added pressure because you know they're behind you whether you win or lose,” Yanez said. “If you lose, they know whether you tried hard or not. Whenever you go out and put up a fight, they know when you fought your heart out and they'll still love you after a loss. They love the fighting spirit. As long as you did your best and you know that you did your best, they're gonna love you no matter what. That's the best part about it and the biggest blessing.”

About the only bad part is that now everybody is going to expect a highlight reel finish every time he steps into the Octagon. Yanez is okay with those expectations.

“Honestly, I really don't even think about it too much,” he laughs. “It's always a bonus to get the finish, but I just go out there and try to fight to the best of my abilities. And it's always great going out there and getting an extra 50k on top of what you already get, so there's a little bit of incentive for me to say, you know what, let me go out there and make it spectacular, but I know if I let it get too much in my head, it's not gonna go good because if you search for the knockout, you end up getting knocked out. So I stay calm, stay ready, stay steady and stay technical during the whole time and it will fall into place. These last three performances, that's just me being technical, me waiting for the right times and it's worked out every single time.”