Adesanya here for a good time, not a long time 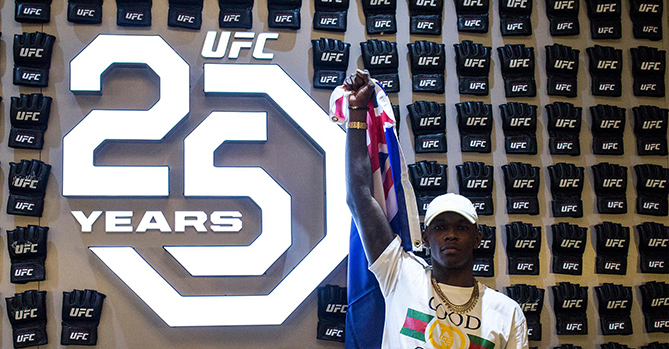 When the flights go over double digits, it can cause even the most steel-nerved fighter to show show some cracks in his armor. But after arriving in Las Vegas from New Zealand earlier this week for his Friday main event against Brad Tavares, Israel Adesanya was as cool as ever.

“That’s easy,” he said of the over 14-hour journey. “I came from New Zealand, slept like 80 percent of the way, then from San Fran, easy, light work. I’ve done it a few times, so my body’s used to it.”

Having fought in Los Angeles and Colorado as a kickboxer, Adesanya has already gone through the whole NZ to USA routine, and while that wasn’t as a main event UFC fighter, he isn’t bothered by the bright lights that come along with being a headliner.

“It’s my first fight in Vegas, being the main event, but the first fight, last fight, if I’m in my backyard, if I’m on Mars, it’s just a fight.”

Now that Mars flight could break “The Last Stylebender.”

If his calm is rare, it’s because Adesanya is proving to be a unique character in this sport. Unbeaten in 13 pro fights, including two in the UFC, the 28-year-old arrived in the promotion with a lot of hype, and he not only nailed it in his Performance of the Night stoppage of Rob Wilkinson in February, but he won over fans and the media with his quick wit and willingness to tell it as he sees it. And though he had to tough out a split decision over Italian prospect Marvin Vettori in April, the buzz has not died down in the slightest.

It’s just as he pictured it.

“Things are going according to plan and things are happening the way they’re supposed to happen,” said Adesanya. “I feel like I’ve already seen myself as who I am for years, but no one really paid attention until I made my statement. And now everyone’s kind of late to the party, but they’re catching up. I’ve expected all this and I’ve been prepped for all this, so this is nothing for me, it’s just a job.”

A job he seems destined for, yet even after a stellar 75-4 (29 KOs) pro kickboxing career, he had to pay his dues on the regional MMA circuit, and that led to his ambitions perhaps not being taken seriously in those early days. Adesanya admits that was frustrating, but now that he’s in the UFC, there’s no turning back now.

“At times it was (frustrating), but I took my time and I just trust the process,” he said. “We took our time to get to the UFC because we wanted to get here and face the top tier guys. We didn’t want to just come here and be fed bums. We wanted to come here and face the top ten, top five, and be ready. So I took my time to get here, I got my experience outside the UFC and now I’m here and I’m showing everybody what’s up.”

What’s up is that Adesanya is a creative striker who is still trying to get his ground game up to the level of his standup attack while being willing to face all comers in the process. Tavares is no pushover; in fact, he is the toughest test of the Nigeria native’s career, and someone many fans and pundits believe will leave the Octagon with a win this Friday. That talk doesn’t bother Adesanya though, because he’s at the point where any talk – good or bad – is just noise that he can’t let in his head.

“I don’t pay attention to it,” he said. “I can’t even read my comments anymore. There was a time, maybe last year, where I was like, you know what, there’s gonna be a day where I can’t even respond to people in the comments or read my messages and stuff. And now that day is here, and I just keep the same energy and do what I’m doing. I don’t really focus on the good, the bad or anything. They can say what they want to say, whether it be ‘You’re the man,’ or ‘You ain’t s**t.’ I just let it pass through me.”

That’s got to be difficult, especially with the noise around him getting louder and louder with each fight. But he found his solution.

“Breathe,” said Adesanya. “People forget to breathe sometimes and people forget to relax and take everything in but don’t let it overwhelm you. It’s not really daunting to me because I’ve always expected this. It’s like I’ve done this before, and I have.”

He once was doing this when nobody was looking. Now the world is watching. To him it’s all the same.

“Friday night is just another page in the book,” he said. “Once I get that done, I’ll move on to a new page.”

This must be shaping up to be some book.