Adams wants to be the Donald Cerrone of the heavyweight division 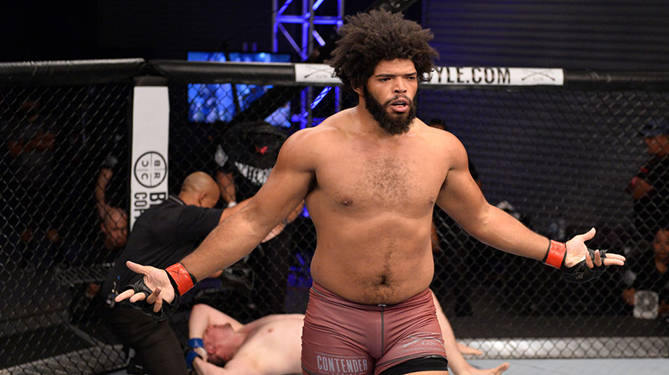 When 6-foot-5, 265-pound Juan Adams says, “It’s hard for me to blend into a normal crowd,” it’s not just a figurative statement, but a literal one.

That’s why he might be the most intriguing heavyweight prospect to hit the UFC in a long time. He knows it too.

“I want to make the heavyweight division the glamour division again,” said “The Kraken.” “I want to make it the division where everybody wants to be ‘that guy.’ I’m not taking anything from these guys; they’re all cool people. I’ve hung out with a lot of these guys and they’re cool dudes, it’s just that my personality is not a common personality. And this is me all the time. It’s important to be authentic, because right now, there’s a lot of people trying to be fake entertaining and you can tell it’s not really them.”

From the time Adams busted through the doors at the TUF Gym in Las Vegas on July 31 on the way to the Octagon for his Dana White’s Tuesday Night Contender Series bout with Shawn Teed, it was clear that he was going to be entertaining. And he didn’t disappoint, stopping Teed in the first round to pick up his fourth pro win (all via first-round knockout) and a UFC contract.

But did I mention that he’s the type of imposing physical presence that fans expect from their heavyweights? How imposing? He cuts down to 265 pounds.

“I walk around pretty big,” he said. “It’s hard for me to cut down to 265, but I’m super diligent and that’s how I continue to be successful.”

But will he start a petition for the UFC to bring in a super heavyweight division?

“Or at least add ten pounds to the one they have,” he laughs. “If they do make a super heavyweight division, then I can be a two-division champ because there’s no way I can possibly cut to 205.”

It’s an interesting spot for Adams to be in because while there are super heavyweight bouts outside the UFC, a lot of the time it’s because the fighters simply don’t want to make that cut and you get fights that are, for want of a better term, sloppy. Adams is an athlete, having wrestled for Virginia Military Institute and even being offered an NFL tryout after graduation. But at a walk-around weight of 285, he is in a bit of a no man’s land.

“Even in college, I was always concerned if I would be able to make the 265 limit,” he said. “Because I was cutting to 285 in college. It wasn’t a huge cut, but I still made it. So I knew it was always going to be difficult. But when you go into it a task knowing it’s going to be difficult, it forces you to have that mental fortitude. And once you do it once and know you can do it, for me, from that point on, there’s no excuse to not make it. So whatever the number is, if I can physically do it, I’ll find a way.”

He has, and since turning pro in 2017, he’s been a monster for opponents to deal with. And while making the heavyweight limit isn’t easy, fighting is worth it for that guy who doesn’t want to blend into the “normal” crowd.

“One reason is that I’m incredibly good at it,” he laughs. “Two, it’s something different. I don’t like being like everyone else. Other jobs don’t do it for me. I worked in the corporate world and I’ve done all kinds of stuff. I managed nightclubs for a while, and I like doing stuff that’s different. I have a degree in Computer Science but I knew as soon as I graduated that it’s not what I wanted to do.

His trash talking is @UFC level, but did Juan Adams do enough to earn a UFC contract? pic.twitter.com/8fXpkyd4Yl
— UFC FIGHT PASS (@UFCFightPass) August 1, 2018

“Competition has always been a really big part of my life and the chance to still do that is huge,” Adams continues. “You can only do it while you’re young, so a lot of it was a ‘what if’ thing. I wondered if I could do it and now’s the time to. In 15 years, I’ll be 41 years old and I don’t want to be 41 and asking what if I had pursued what I wanted to do or what if I had taken that chance. I took it, dove headfirst into it, and right now, it’s going great for me. And I’m hoping it only continues to go better.”

But is he ready for the big show with less than five fights? Come on, you know what “The Kraken” is going to say.

“I’ve risen to every challenge in the cage and nobody has lasted five minutes against me,” Adams said. “I’m ready for anything and I’m gonna be ready for whatever they put against me. And I’ve been pretty vocal – I want to fight again before the end of the year. I’m looking to be like a Donald Cerrone of the heavyweight division. I want to fight as many times as I can for as long as I can because you only have so much time to be great and that’s what I want to be.”