Adam Hunter is back on UFC FIGHT PASS and brought a few friends with him for backup.

The MMA community has once again been blessed by the comedic voice of the sport. After Hunter’s 2020 UFC FIGHT PASS special “Throwing Punches” was released, it was hard to find a fighter and comedian that wasn’t talking about the special.

In under an hour, Hunter was able to roast seemingly every fighter in attendance, on the roster and outside the promotion.

What would be left for Hunter after taking aim at such broad targets? Well, after over 20 years of writing jokes, Hunter had no problem bringing the world another special. This time, however, he’d be bringing some of the biggest and funniest names in MMA with him.

Watch Hunter Joke About Everything MMA On UFC Fight Pass

“Me and Henry worked on it and Din has done standup comedy before; we’ve done a couple shows together,” Hunter said. “Chael, I didn’t know how he was with standup comedy, but I knew how good he was verbally and on the mic, so I was very confident with who I chose.”

Recording a show in one take for the second time for UFC FIGHT PASS may have been fine with Hunter, but he knew it would be interesting seeing how Thomas, Sonnen and Cejudo adjusted. Thomas may have standup experience under his belt, but as for Cejudo and Sonnen, it was a dive into the deep end. 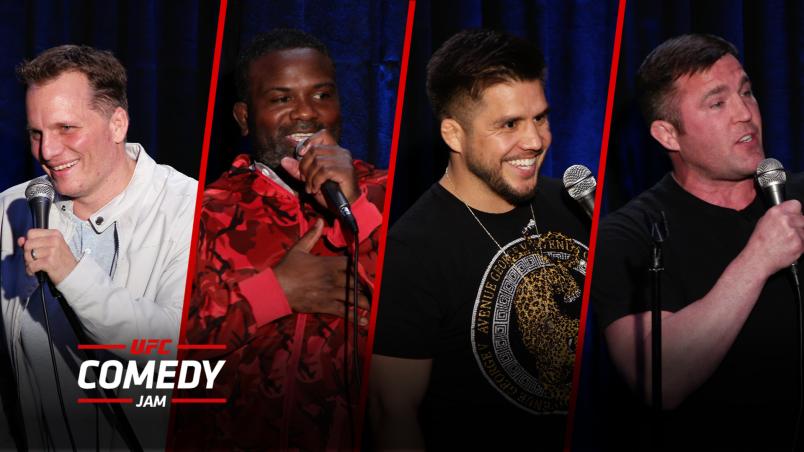 “I thought it’d be a great experience for the fighters to be able to tell their stories and for the crowd to see a different side of them, and a lot of people are very curious as to how good these guys are going to do,” Hunter said. “Even if it doesn’t go well, it’ll still be funny.”

It was just another night in the office for Hunter and entertainment chameleon Din Thomas. On stage, everybody delivered their set with confidence and personality, but backstage, Hunter was able to see the undefeated Sonnen and former double-champ Henry Cejudo in a light very few on this planet ever will.

“They were super nervous,” Hunter said. “I never saw Chael more nervous, and the same with Henry. It was nice to take these guys out of their element, which was the Octagon. A lot of these guys want to go into broadcasting and this was sort of a class you can get on stepping out of your comfort zone 100%.”

The fans in attendance, predominately fighters, would also be brought to the center of attention many times. Aljamain Sterling, Belal Muhammad, Miesha Tate and many more were subject to jokes, but the person who’s spent most of his career on the butt end of roasts would have the most to prove that night and he wasn’t sitting in the crowd. Instead, he would be the first comedian Hunter passed the mic off to.

“I always thought it would be fun for athletes and comics to tell jokes and I think people never saw that side of Henry,” Hunter said. “Everybody was like, ‘Oh! Henry’s going to bomb. Henry’s not funny!’ People loved Henry the most and he probably had the lowest expectations from the fans going into it”

Hunter and Cejudo have worked together in one way or another for years, most famously on Cejudo’s “Cringe Ass Henry” video for the MMA Awards, so he was one of the few not surprised by Triple C’s performance. As for the crowd and the internet, that was a whole different story.

“I loved Henry’s jokes,” Hunter said. “When he won the Olympics. he walked around like he was five feet tall. That was a really good one.”

Whether you’ve still never bent the knee, are jealous that Chael beat your favorite fighter or are a Din Thomas-hating Matt Serra rider, prepare to begrudgingly laugh for 60+ minutes.