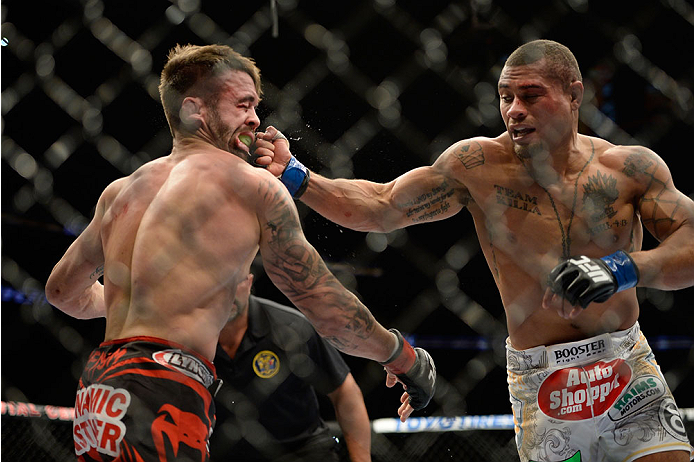 Abel Trujillo isn’t worried about getting into a fight this weekend. That wasn’t always the case, as he’s already seen fights with Myles Jury, Bobby Green, Francisco Trevino and Ross Pearson fall by the wayside in 2014. But if you ask him if he’s got his fingers crossed that Tony Ferguson is standing in the Octagon with him on Saturday night in Las Vegas, he’s pretty sure that will be the case.

“I think he will,” Trujillo laughs. “It sucks for him though.”

That’s pretty much the consensus when it comes to fighting the heavy-handed Trujillo, a fiery competitor who has the power to either end a fight with a single blow or punish an opponent for as long as he can take it. It’s not a pleasing proposition either way, and while the aforementioned fights fell through due to injury or card shuffling, at the same time, there isn’t a long line forming to face the Floridian either.

“Hearing from family and friends and people from the outside, they’re like ‘nobody wants to fight you. They take the fight, but they always back out,’” Trujillo said. “I’m starting to see that pattern now.”

That’s good for a fighter’s reputation or aura, but not for his bank account, and being inactive since February certainly hit Trujillo in the wallet.

“I had three opponents back out, and then when I had an opponent locked and loaded – Ross Pearson – I got hurt,” he said. “I had no money coming in, so that was probably the most frustrating part.”

At least in that lone fight of 2014, Trujillo not only picked up his win bonus for defeating former WEC champion Jamie Varner at UFC 169, but he also earned Knockout and Fight of the Night bonuses. So if you’re not going to get another paycheck until December, that’s the way to do it. And when asked about the year thus far, he doesn’t look at it as a disappointing one at all.

“The year was great,” he said. “I wasn’t as active as I wanted to be, but in the grand scheme of things, after I win this fight, it will be a great year. I already fought on the February card with two title fights and now this card has two title fights too. That’s just crazy in itself when it comes to exposure, so it’s good. I always try to think positive.”

And there are positives, with perhaps the biggest bonus that came out of the Fight of the Year candidate against Varner was that Trujillo showed an ability to not just dish it out, but to take it too.

“It feels good, but I’m a fighter by nature,” he said. “I’ve been fighting my whole life. Not literally, but just in everything that has to do with life – I get knocked down and I get back up. And in a fight, the referee has to come in and stop it. It’s just who I am. “Killa,” that name was given to me. I didn’t choose it and I didn’t choose the sport; the sport chose me. And I think that fight defined who I am as a person. I just never give up.”

Sharing that philosophy is former Ultimate Fighter winner Ferguson, and on a stacked UFC 181 card, many feel that this main card bout might just steal the show. And despite having the power to end the fight with one swing, as well as knowing that one of his Blackzilians teammates – Michael Johnson – is the last man to beat “El Cucuy,” Trujillo is leaving no stone unturned as he prepares for a fight that could give him his third consecutive win and likely a place in the lightweight top 15.

“I take every opponent seriously,” he said. “You’re only as good as your last fight, and this is my fight, so I’ve got to show up. I never sleep on anybody. That’s the worst thing you can do in this sport.”

Trujillo doesn’t sleep on opponents, but he’s done his part to put them to sleep, making him one of the most intriguing prospects in the sport. But the UFC apprenticeship is over for the 31-year-old. Now’s the time for him to make a move, and he expects to leave Las Vegas with a win this weekend and then look forward to the most important year of his career.

“Next year, I’ll fight top ten, top five opponents, and with a valid performance I should only be one fight away from a title shot,” he said when asked his perfect scenario for 2015. “I’m trying to be as optimistic as possible, and I really see that as possible.”