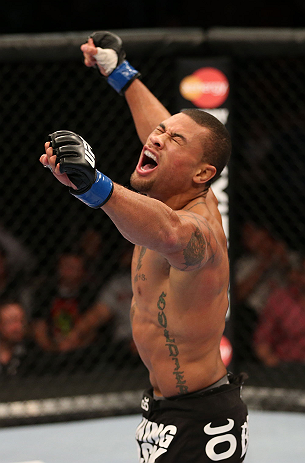 No one starts a career in combat sports aspiring to a 5-4 win-loss record. In boxing, that’s a kiss of death, the ticket to a career full of opportunities to get beat up by hot prospects or the promoter’s kid. In mixed martial arts, the world is a little more forgiving.

Not easier, but more forgiving. So when Abel Trujillo lost his second straight bout against Alonzo Martinez in April of 2011, he knew something had to give.

“Back then I was training myself, so I was pretty much just going in with my wrestling background and my heart,” said Trujillo, a four-time NAIA All-American wrestler for William Penn University. “And I thought it was normal to fight guys on a week’s notice. I didn’t know anything about training camps. So I got a couple losses that I deserved, and a couple losses that I felt like I was in the wrong place and I kind of got screwed over.”

What made the situation even worse was that it was evident that Trujillo had talent, and when he was on, he looked like a fighter with UFC potential. But nine fights into his career and barely over .500, no one was really willing to take a shot on him.

“At a couple points in my career I just broke down,” he said. “I was like, I really love this sport and I know I’m really good at it and I know I can be champion, but I’m screwing myself up. I had nobody to look over my career, I was not doing it right, and it was very frustrating.”

But after a decision win over Lucas Gwaltney in August of 2011, Trujillo got a call to help some fighters out in the Blackzilians camp in south Florida. The Greensboro, North Carolina native packed up his gear and was on his way. There, he not only drew rave reviews from his training partners, but he caught the eye of manager Glenn Robinson.

“I came down here to help a couple guys with their fights, and it was like ‘hey, this guy’s a good training partner,’” Trujillo recalls. “These guys were already established in the UFC, so I think I was down here to be a training partner, but once they saw how hard I really worked and that I was getting better and actually starting to beat up on these guys, it was like ‘damn, he’s good.’ Then they started getting me fights and I was winning them.”

Trujillo followed up the Gwaltney win with three more victories, and Robinson took his new charge on the side to discuss his career, letting him know that he could probably get the lightweight prospect into the Strikeforce or Bellator organizations. Trujillo respectfully declined.

“I told him no, I don’t want that,” he said. “The UFC is my dream. I’d rather hold out. It may take another year, but that’s what I want. I knew what I wanted and I didn’t want to settle for anything less.”

In the summer of last year, his dream came true as he was signed to a UFC contract. Unfortunately, his debut against Tim Means at UFC 151 was canceled when the September 2012 show was scrapped, but as Trujillo points out, for him it was the best news he could have received.

“With the UFC that got canceled, my right hand was injured,” he said. “I had a torn ligament, so I was going into that fight with one hand, and I’m right handed, so my strong hand was gone. So that was a blessing in disguise for me that it got canceled because I didn’t want to go into my UFC debut with one hand.”

The news wasn’t so good later that year when a December 8th bout with Means was scrapped when Means injured himself in a freak fall in the sauna on weigh in day. Luckily, Marcus LeVesseur also lost an opponent earlier in Michael Chiesa, making Trujillo vs. LeVesseur the perfect replacement bout. At least for Trujillo, who tore through LeVesseur in less than two rounds en route to a TKO victory that instantly put him on the radar of fight fans. If you’re looking for an impressive debut, there are few more notable than that one.

“It was my UFC debut and you only get one, so I wanted it to be action-packed,” he said. “I didn’t want to be boring and have people boo or not remember me, so I definitely wanted to make a good first impression with the UFC and the fans.”

Mission accomplished. And in the process, he kind of put a dent in the first time UFC jitters theory.

“I meditate a lot and imagine stuff visually, and I imagined me dominating in almost every position,” he explains how he was able to be on point from start to finish in his big show debut. “And even when I was in the lower circuits I was meditating on being in the UFC and what it’s like being in the cage with all those fans and lights, so it was like I had been there a hundred times, and when I got there, it wasn’t that big of a shock.”

He did shock LeVesseur, as well as those who had never heard of him before that night in Seattle. On Saturday, Trujillo has similar shocking intentions when he faces off with Russia’s Khabib Nurmagomedov, owner of an imposing 19-0 record and a January knockout of Thiago Tavares. It’s one of those fights that hasn’t received a lot of attention, but it’s one that could just be a preview of the future of the 155-pound weight class if recent performances hold true again this weekend.

“Man, I was super excited,” said Trujillo of his initial reaction to the fight. “This is what I’ve been waiting for and I feel like now is my time. I’ve been working my butt off and I feel like I’m in my prime right now. So I want to get as close to that title shot as I can now, and I want to fight for the title as soon as possible. So I was excited about the fight.”

10-4 against 19-0. It’s an intriguing numbers matchup, simply because you wonder who has the mental edge. Is it the seemingly invincible fighter who has never tasted defeat, or the one who knows what it’s like to lose and never wants to feel that way again? Trujillo has his own theory.

“I learned more from those losses than all my wins,” he said. “So even though he has more fights and he’s undefeated, I feel like I’ve been through more and I’m more experienced than he is, and I’m ready to give him his first loss so he can learn a lot.”

That’s mighty nice of the 29-year-old Trujillo, and when you point this out to him, he laughs the laugh of someone who has been through more downs than ups in his career, but who finally appears to have made it to the other side.

“Luckily I fell into a good situation down here in Florida with the Blackzilians where I could get the proper training I needed, the proper management, and everything’s falling into place,” he said. “I was always a hard worker; I just didn’t know exactly how to train.”

Now he knows how to train. And win. And once he got that win in the biggest show in the world…

“I didn’t want the feeling to go away.”

On Saturday, he’ll try to recapture it.