Abdul Razak Alhassan Enters UFC Fight Night: Barboza vs Chikadze With A Fresh Mindset And Hopes Of Getting Back On Track.
By Gavin Porter, On Twitter: @PorterUFCNews • Aug. 26, 2021

Things haven’t been going Abdul Razak Alhassan’s way and yet, the talented middleweight can’t help but smile from ear-to-ear as he gears up to face Alessio Di Chirico at UFC Fight Night: Barboza vs Chikadze.

It’s no secret that Alhassan was unsuccessful in his last three trips to the Octagon. He dropped an intense Fight of the Night contest to Mounir Lazzez, was knocked out by Khaos Williams and then lost a grueling fight by unanimous decision to Jacob Malkoun. Alhassan’s three losses were all very different, but combined they led him to a single conclusion.

It was on him to change his path.

“Usually, a lot of us start thinking negative and why you are in that negative spot. You keep thinking negative and the bad will go bad, and you’ll be negative,” Alhassan said. “But you have to give yourself good energy and always think positive and think right, and you always got to go in there and prove what you got. You only got to prove that to yourself. 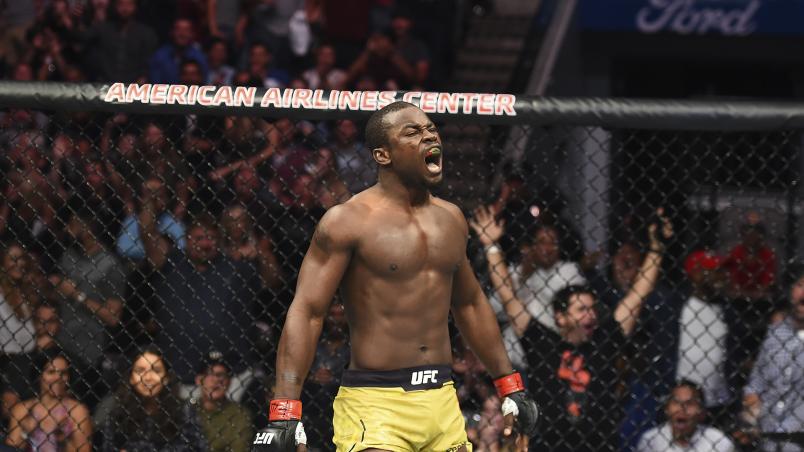 “It’s been very hard,” he continues. “As an athlete with a lot of pride you can never say that it doesn’t hit you that hard. It hits you very hard, especially knowing you put as much work as you can to do your best and then you come in and fall short.”

That’s when Alhassan (10-4) decided to close up shop in Texas and move his camp to Team Elevation in Colorado. It was exactly the fresh start that the 36-year-old needed to get his confidence and ability ready to compete on August 28.

With his coaches telling him to forget the past and to forget the bad outcomes he’s experienced in his last three fights, Alhassan has bought in and believes he’s going to start this new chapter of his career with a bang.

“Sometimes people know me as the berserker, and I come in and try to go berserk and all that kind of stuff. Sometimes I know my coaches are saying something and I’m doing a different thing. But I’m trying to show them the me they haven’t seen before, the me in the gym that when I’m going, people are like ‘Holy S***’. That’s what I want to show the world,” Alhassan said. “And I want to show myself that ‘Hey, you are what you are and even above and beyond.’”

Before moving his camp to Colorado, it was tough for Alhassan to let go of his previous fights and to ignore the noise from critics and people doubting him. He had put so many hours of hard work in, just to go on a three-fight skid. The only thing that Alhassan was sure of was that there was no way he was going to give up on himself.

"I'm really hungry for a win. It's been a bad streak right now."

Abdul Razak Alhassan (@JudoRazak) discusses how #UFCVegas35 is a fresh start and the perfect opportunity to bounce back 🔊⬆️ pic.twitter.com/pfW9UdlbZT

“I know that right now, a lot of people don’t have a lot interest in me; they feel like, ‘OK he’s done with.’ I know that I’ve not given up on myself. Never ever would I give up on myself. Right now, I feel like I’ve found that thing to push me, that confidence, that drive,” Alhassan said with emphasis. “I know I’ve found it and I’m going to prove it and I’m going to show it. It’s easier said than done, but I know when I fight, I’m going to get my hand raised.

“If I have to listen to criticism and people that don’t know what I’m going through…forget them. I’m going to do what I have to do to get the win and that’s all that matters.”

To snap his skid, Alhassan will have to get past Di Chirico, who is coming off an emphatic knockout of Joaquin Buckley. It’s a tough fight, one that both middleweights agreed to on short notice after their initial opponents fell out of their respective fights.

But after everything that Alhassan has been through, and all the ups and downs he’s experienced, he’s confident that he’ll bounce back in a big way by defeating Di Chirico.

“I’m hungry. It’s been a bad streak right now,” Alhassan said. “I’m really hungry for the win and I know I’ll go in there do what I have to do.”

Don’t miss UFC Fight Night: Barboza vs Chikadze, which also features The Return of The Ultimate Fighter finale. The action begins at 7pm ET / 4pm PT on ESPN and ESPN+.