"It’s one fight at a time for me but I don’t envision myself losing anymore, and that’s where I’ve gotten with this sport and where I am mentally." - Aaron Simpson 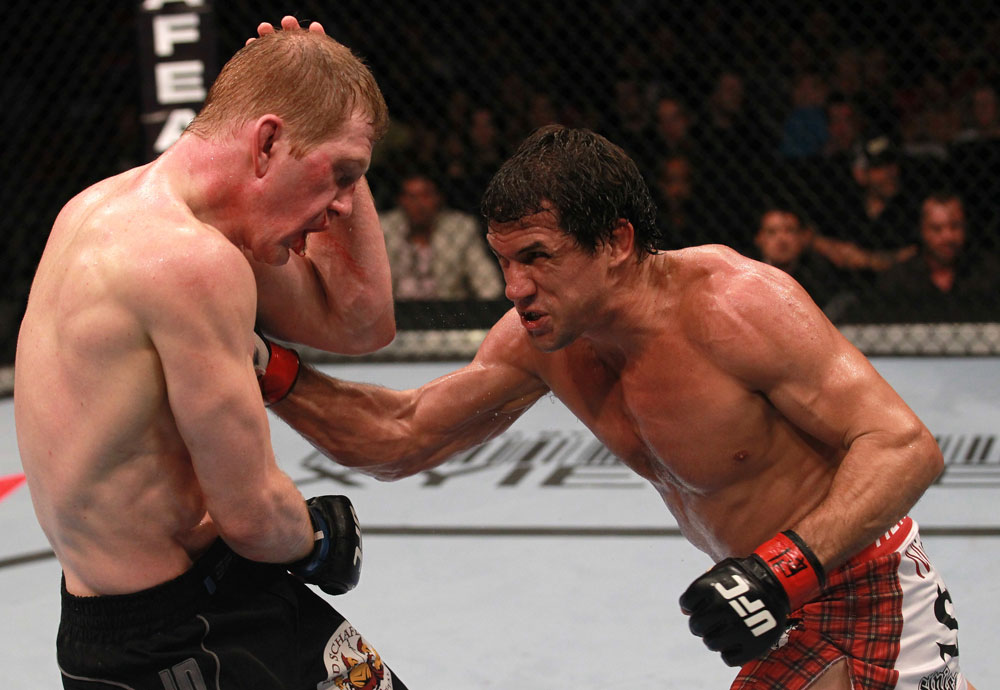 Old habits die hard. So if you expected Aaron Simpson to make a complete transition from coach back to athlete after nine years as an assistant working with the wrestling team at his alma mater, Arizona State University, that just wasn’t going to be the case.

And though he’s not kicking and screaming without his clipboard in hand, he’s not going quietly into the night either. But that’s a good thing.

“It is tough,” he said when asked about putting his ego aside to become the coached and not the coach in his fairly new sport of mixed martial arts. “Being a former coach, I analyze things differently than I would as if I were just kinda led by somebody as a young 20-year old who’s looking for coaching. Now, I’ve been there, done that, so I have my own way of doing certain things, and some of the coaches at my gym give me crap about it because I question things more than others would. Hopefully it’s not ego, but just me and my past experiences of training and peaking and conditioning and everything. I allow my coaches to put work on me, but at times I also step in and say ‘I think it should be done this way,’ and that’s something I’ve been trying to work with and get better at also in allowing people to take my career in their hands.”

Just for the record, Simpson wasn’t an ordinary coach. Some of the current UFC fighters under his wing were Cain Velasquez, Ryan Bader, and CB Dollaway, and he even put in a year coaching at Cal-Poly before moving to fighting full-time. So in a sport some of the uninformed still see as a streetfight with gloves, Simpson brings a different outlook, one that requires not only physical prowess and intangibles such as heart and determination, but smarts and analytical thinking, two of his greatest coaching assets.

Knowing the enemy has led Simpson to 10 wins in 12 MMA bouts, with his only losses coming in back-to-back barnburners against Chris Leben and Mark Munoz in 2010. In 2011, he bounced back with three decision wins over Mario Miranda, Brad Tavares, and Eric Schafer, and that’s the good news. The bad news was that none of those three victories were on the televised portion of the event, making his winning streak one of the quietest in the UFC today. But Simpson found the silver lining.

“It’s allowed me to go out there and get better and use these last three fights as practice for me to really hone in on my style of fighting and the type of fighter I want to be,” he said. “And it also allowed me to really step back and learn the sport. I came out and my style was kinda balls to the wall in my first several fights, which is exciting, but it wasn’t necessarily the smartest way to fight. I think I became a smarter fighter and I’m able to get in and out of situations a little wiser. It still brings that type of intensity, but at the same time, it’s smarter.”

And as he approaches Wednesday’s bout with Ronny Markes, a fight that sees him return to the FUEL TV televised main card, he believes that he’s found the balance that will have him displaying the form that finished six of his first seven opponents by knockout.

“It’s been a long time coming, so it’s something I’m definitely gonna look for in this fight and if an opportunity presents itself, I’m gonna step in and take it,” said Simpson, who will certainly have a tough out in front of him in Brazil’s Markes, a 12-1 prospect who nullified the wrestling attack of former Czech Republic national champion Karlos Vemola in his UFC debut at light heavyweight last August. Now he’s going to try to do the same at middleweight to Simpson, a former two-time All-American for ASU. “The A-Train” has other plans.

“I think I’m very hard to take down on a wrestling mat or in an Octagon, so I welcome him to try to take me down,” said Simpson. “At the same time, if he wants to stand there and try to throw his hands at me, I feel like I’m advanced there in the sport. It’s the old cliché of whatever happens happens, I’m comfortable. And I really am. I’m ready to exchange if need be or to get in there and mix it up wrestling wise or grappling wise.”

As for Markes’ debut at 185 pounds, Simpson insists that his opponent may be in for some surprises.

“I think it’s a faster division,” he said. “And we’re a little more athletic for the most part. When you start going down the weight classes and get down to ‘70 and ‘55, those guys are lightning fast, and in the 185-pound division, people still throw heavy hands. You have both athleticism and speed along with power, and obviously the 205ers are heavy, so they have a lot of power, but you gotta deal with the speed and athleticism also and I think that’s what you get with the middleweights.”

There’s that analytical mind of the coach creeping back in, and even though at 37, Simpson is older than many of his peers in the middleweight division, when you consider all the tools he brings into the Octagon – from smarts to wrestling to fight ending power - he may just be writing a story that has an ending Hollywood would be knocking down the door to use.

“It’s one fight at a time for me but I don’t envision myself losing anymore, and that’s where I’ve gotten with this sport and where I am mentally,” he said. “Physically, I feel like I’m 27 years old. I’ve never really let myself get out of shape, and I’ve always been training since high school. I’ve never had more than a couple weeks off. So because of that, I’ve never mentally let myself think that I’m 37, I can’t be doing this anymore. It does take time to recover a little bit more from hard workouts, but at the same time I know that and I know that I come back stronger because of it. So I see myself winning, and that’s the bottom line, fighting those bigger names, getting up in that top ten, and eventually getting to where I can have a title fight and get in there and mix it up and go after that belt. I don’t have a ten year career ahead of me, but I do feel like I have three or four years left to make a run.”