"I sound like a broken record at this point, but I still don’t feel
like I’ve given my perfect performance in the UFC and I’m still striving
for that." - Aaron Riley 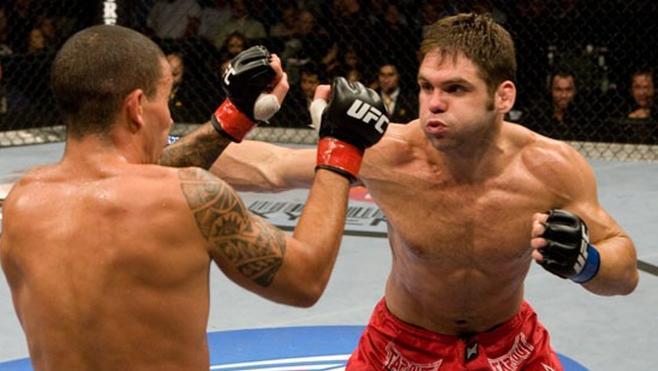 If you can make it through more than 40 professional fights without suffering a broken jaw, you can consider yourself lucky. Some might even say that if you got away with just one that you should count your blessings. But no one would call Aaron Riley after he broke his jaw not once, but twice, most recently against Tony Ferguson in September of 2011.

“I’d never wish a broken jaw on anybody,” said Riley, who also dealt with the injury in a 2006 bout with Spencer Fisher. “It’s one of the worst experiences ever, being wired and not being able to eat for like six weeks.”

What may make it even worse is that Riley had his jaw wired after he had been dieting to make weight, making his impending string of “blended suppers” even tougher to deal with.

“It’s a real kick in the…” he stops, then laughs, knowing that you know what was coming next.

But Riley is nothing if not one of the toughest hombres in the sport, and he has been ever since he turned pro at the age of 16 in 1997. That’s why we’ll see him back in action this Saturday night in Seattle against Justin Salas. So after a second broken jaw, why does he still do it?

“I don’t know,” he chuckles. “Sometimes I think I need to get my head examined. I guess it’s just really enjoying the sport and feeling like that it’s what you’re supposed to do. I just feel so at home when I’m in the gym and doing my thing. It’s where I feel most comfortable, even though it’s not comfortable having a broken jaw.”

Admitting that he’s “started to think about what I want to do outside of my career inside the cage,” Riley is still just 32 years old, and though his UFC record is a spotty 3-5, anyone who has followed his career knows that when he’s on, he can compete with anyone in the division, and that win or lose, he’s showing up to fight. As for his ambitions at this point, they’re clear.

“I sound like a broken record at this point, but I still don’t feel like I’ve given my perfect performance in the UFC and I’m still striving for that,” he said. “I feel like I’ve had some really great showings in a couple other promotions, and I’d like to get a decisive finish in the UFC because I haven’t had that yet. I feel like I have unfinished business and a little more to show.”

Would he know that perfect performance if he saw it?

“I don’t know,” he said. “It would definitely be one that ends in a victory and not a trip to the doctor like last time. (Laughs) It’s just having a victory that I’m really pleased with and I feel like I executed well in. I’d love to have a good decisive finish just because we’re at the top of the heap. We’re in the Super Bowl of mixed martial arts and to have a great finish and a decisive win here would be a feather in your cap and something to be proud of.”

Just being here is something Riley can hang his hat on, simply because he is a bridge between the old-school era of MMA and the modern one, and part of a fraternity of fighters that is well-represented on Saturday’s card in the form of Riley, his old rival in a classic two-fight series Yves Edwards, and the man Riley made his UFC debut against in Robbie Lawler. If Edwards’ original opponent, Fisher, remained on the card, it would have been like a family reunion. But even with that trio of veteran battlers, it’s a reminder that even though time has passed, they still have gas left in the tank. Does it feel like 12 years since the last bout with Edwards in Hook N Shoot in 2001?

“Yeah and no,” he laughs. “It’s crazy how time passes. Robbie Lawler is on this card as well, and I made my UFC debut against him in 2002. Both of those matches seem like a lifetime ago in certain ways, and at other times, it’s like ‘what was that, five years ago?’ It’s kinda funny.”

Talking to Riley should be a must for any MMA writer, and not just because he’s one of the most affable athletes in the game. It’s because a chat with the Indiana native is a history lesson on an era few were around to experience simply because coverage of the sport was nowhere near what it is now. Riley’s formative years were filled with tape trading and the UFC Fightline which you called up in the hopes of getting some insider fight info in the days before Twitter.

“It was definitely an awesome time in MMA,” he said. “It’s fun to chat about the old days for sure, and there were definitely some good matches in the pre-TUF era. I teach at a martial arts gym in the DC area, and it’s so funny because I’ll mention to my fighters that Chuck Liddell fought Pele in IVC (1998), or this fight and that fight, and people are like ‘what’s that?’ That was back when we were all hoping it would make it to the mainstream.”

It’s made it, with the fact that this weekend’s main card is being televised on free network television via FOX the most shining example. So for a veteran like Riley, it’s not only a chance to get back into the Octagon, but a time to reflect on a long career that’s still got kick in it.

“I feel fortunate that I’ve been able to stay relatively healthy and still be active in the game,” he said. “Mixed martial arts has really done a lot for me. I’m from a very small town in Indiana (Tell City) and I’ve got to travel the world because of mixed martial arts. I’m just so thankful to have got the chance to be involved with it and so happy to be in the biggest and best show in the world and still competing.”