Aaron Phillips: There's something about Louisiana

"All the UFC fighters that have come out of Louisiana have really set a great foundation for us and a great track for us to follow." - Aaron Phillips 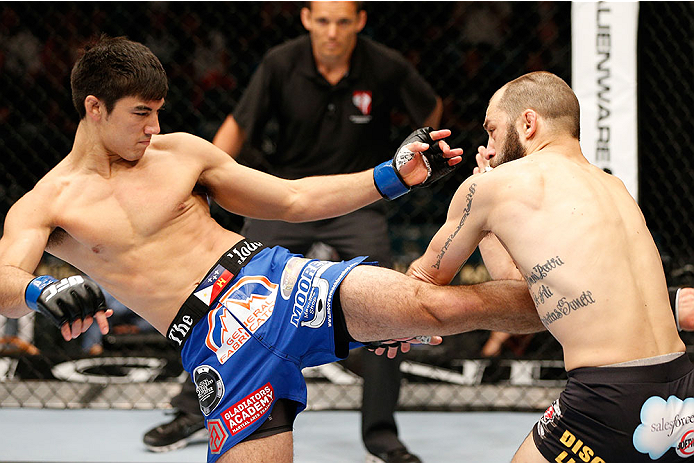 MTV filled a mixed martial arts reality show, Caged, there. A documentary film crew descended on the state to film the rise of current featherweight contender Dustin Poirier in the critically-acclaimed Fightville. So what is it about Louisiana’s fight scene that has captured the imagination of people across the country?

“I’ll tell you what, there is no shortage of personality down here.”

Aaron Phillips, a 25-year-old bantamweight out of Lafayette, may have been born in Texas, but Louisiana is what’s running through his veins, and he’s not surprised that people outside the state are fascinated by what goes on it. The only thing he wonders is, how come there isn’t more attention given to his adopted home.

“I don’t know how MTV isn’t back here or how some other TV show isn’t back here,” Phillips said. “They’re missing out on some great fighters and some great entertainment. Every day I go in the gym, I try to kick butt and I’m also laughing and hanging out with my guys. The schools and training facilities around here are blowing up. Jiu-Jitsu’s going crazy around here, we’ve got some excellent black belts based out of Louisiana, and striking’s going up. All the UFC fighters that have come out of Louisiana have really set a great foundation for us and a great track for us to follow, and I think you’re gonna see an explosion of Louisiana talent coming into the UFC.”

The latest is Phillips, a protégé of UFC veteran Tim Credeur at the Gladiator Academy in Lafayette, the same gym that produced Poirier. 8-1 as a pro, “The Model” is currently awaiting his call to the Octagon on Saturday night, when he will drop from featherweight to bantamweight to face Matt Hobar. It’s the moment when the world gets to see how Phillips deals with the lone loss of his career, a May decision loss to Sam Sicilia at UFC 173.

There’s no shame in losing to the veteran Sicilia, especially in your UFC debut, but it was the way that Phillips lost that made people sit up and take notice. Or should we say the way Sicilia won, because it was the Washington product’s ground game that led him to victory, and not his trademark stand-up bombs. That was the shocker.

“It definitely did surprise me coming into round two,” Phillips said. “Round one I definitely think I did my game plan and kept the distance for the most part and landed some really good shots. Watching the video, you can see his corner tell him to shift gears and change game plans and move me up into the cage, and not even really try to take me down, but make it his type of fight - a dirty fight - and for rounds two and three, I learned a valuable lesson in how to win in the UFC and how to win the tough fights and grind ‘em out. Sicilia did that and he came away with the win and that’s how it went down. Sicilia’s a tough guy, he’s a gamer, and he had a good game plan for those rounds.”

In one way, you can look at it as an indirect compliment, that the heavy-handed Sicilia – who has the power to alter a fight with one swing – decided to go away from his usual game plan to avoid extended stand-up time with the talented Muay Thai-based striker, who also holds a fourth-degree black belt in Taekwondo.

“I guess in a way I could see that and I do take it as a little bit of a compliment, but at the same time, I would much rather the win than the compliment,” Phillips laughs. All in all, he’s taken the defeat well, he’s moved on with some valuable lessons in his back pocket, and when he looks at the fight, how many people can say their first UFC fight was in the MGM Grand in Las Vegas?

“It was a great experience and it was definitely different,” he said of his first UFC bout. “Usually I show up to fight for weigh-ins and then you fight the next day. Of course with the UFC you have to be there on Tuesday and take care of all the extras. Those are part of the game and I understand it. They were just new to me. But it wasn’t a bad experience. I enjoyed it and I’m just a little bit more prepared for it this time around.”

In more ways than one. First, he’s a little leaner, having dropped from featherweight to bantamweight, and second, for the first time in his career, he doesn’t have to worry about school or work. Finally, he’s a full-time fighter.

“I’ve really learned and harnessed the word ‘focus,’” Phillips said. “I enjoy going to school, I enjoy teaching classes, and I enjoy training. But right now, I only enjoy training. Some days I enjoy more than others (Laughs), but it helps you to be in the gym two, three times a day, and everything I do when I go to bed to rest, it’s for Matt Hobar. Everything I do is with a purpose. There is no other motive than my fight. The fact that I can focus completely on this fight has given me a huge advantage.”

Location is helping too, as the bright lights of Vegas are far away in the distance as Phillips seeks his first UFC win.