Aalon Cruz Is Living His Dream

After an incredible flying knee KO earned him a contract on DWCS, Aalon Cruz is finally where he belongs.
By Thomas Gerbasi • Aug. 22, 2019

It was the knee heard ‘round the MMA world, a finishing move that has earned Google search descriptions such as “vicious,” “highlight reel,” “ridiculous” and “brutal.”

So how many times has Aalon Cruz watched his handiwork since he knocked out Steven Nguyen with the aforementioned knee on July 30?

“The full fight or just the knee?” he laughs.

“Definitely a couple hundred times because it’s all over my Facebook and Instagram with people tagging me in it, and of course me just watching it.”

It would be impossible not to keep rewinding the finishing sequence in the third round of the Contender Series bout, one where Cruz earned a UFC contract with a single shot that had UFC President Dana White immediately making a contract signing motion. It was a jump off the couch moment for the fans, and a career-defining one for the 29-year-old Floridian, who didn’t have to go through the usual post-fight waiting process to find out if he was going to join the UFC roster.

“It was awesome because everybody’s sitting there, waiting to hear who’s gonna get signed, and I know everybody’s on pins and needles, because they don’t know if they’re getting in,” Cruz said. “I was having a blast the whole time and I couldn’t stop smiling because I already knew I was in the second I hit the knockout and turned around. So I really got lucky in that sense that I was able to enjoy the rest of the process. It was pretty awesome.”

Aleksa Camur, Tracy Cortez and Rodrigo Nascimento also picked up contracts that night in Las Vegas, and now these prospects await the opportunity to make their debuts in the Octagon. It’s been a long time coming for Cruz, a pro since 2013 who has compiled an 8-2 record but has also dealt with the usual bumps in the road that come along with being a talented prospect on the regional scene.

“I’ve gone as long as an 18-month layoff because people would back out of a fight or don’t want to fight me or promotions are sketchy and take you off a card for no reason,” he said. “And that was one of the biggest things that I would always talk to my coaches and my teammates about. It’s a struggle now, but once you make it to the UFC, we don’t have to search for a fight or really worry about somebody pulling out of a fight unless somebody gets injured.”

It’s the dream. Get to the UFC and not just fight the best of the best, but actually get to fight. So when Cruz’ manager Daniel Rubenstein told him about the Contender Series opportunity, it was a surreal moment for the Tampa-based featherweight. 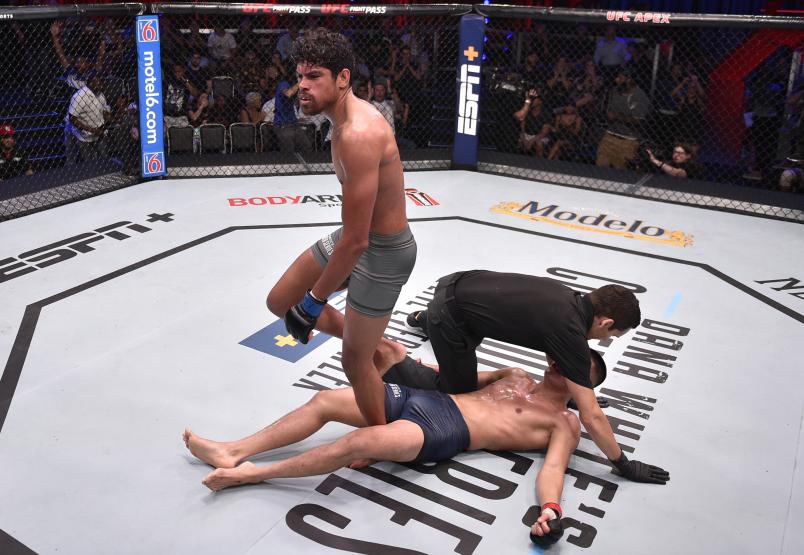 “He (Rubenstein) just sent me the name of my opponent and his Tapology record,” said Cruz. “So the first thing that pops into my phone is a picture of Steven Nguyen with his hand raised and I was excited, but at the same time, I got that drop in my stomach that happens every time I get an opponent. Then I showed my girlfriend and she started screaming. She did all the excitement for me. (Laughs) I didn’t really get too hyped up, but I was excited on the inside. So it was a blessing.”

And when his name was called, he delivered. Now he’s on the UFC roster, he was able to pay off some debts and free up more training time, and he’s got a bright future in front of him. The only bad thing is that everyone is going to be looking for that knee from now on.

“I’d really have to set it up if I was gonna hit it again,” he admits with a laugh. “If I hit it again and lightning strikes twice, that would be awesome, though.”

It would be. But no matter what he comes up with on fight night, he’s glad that he will be doing it in the UFC.

“When you’re not in the UFC, there’s like a big wall and you’re just trying to look over the wall and see in,” Cruz said. “‘Man, I wish I could be in there.’ (Laughs) And now I’m inside and I have been looking at the lower-ranked featherweights to see who I would be able to fight. And I am in the division, so the guys I’m looking at, I could actually be fighting now.”