A Stoic Maryna Moroz Returns To The Octagon

Preparing To Fight A Former American Top Team Teammate, Maryna Moroz Is Unfazed By The Drama Or Her Emotions As She Makes Brings Her Two-Year Octagon Hiatus To An End
By McKenzie Pavacich, on Twitter @mpavacich_ • Mar. 4, 2022

For Maryna Moroz, this fight is everything.

As she prepares to enter the Octagon for her first fight in nearly two years, her flyweight bout against Mariya Agapova is not only a chance to showcase her evolution as a fighter, but also to put two years of adversity behind her.

“People don’t know why my fights have been getting canceled, but it was because I was having trouble with my documents,” the Ukrainian said, expounding on the slew of immigration and visa issues that left her with no choice than to make do with training in her home country for parts of 2021. 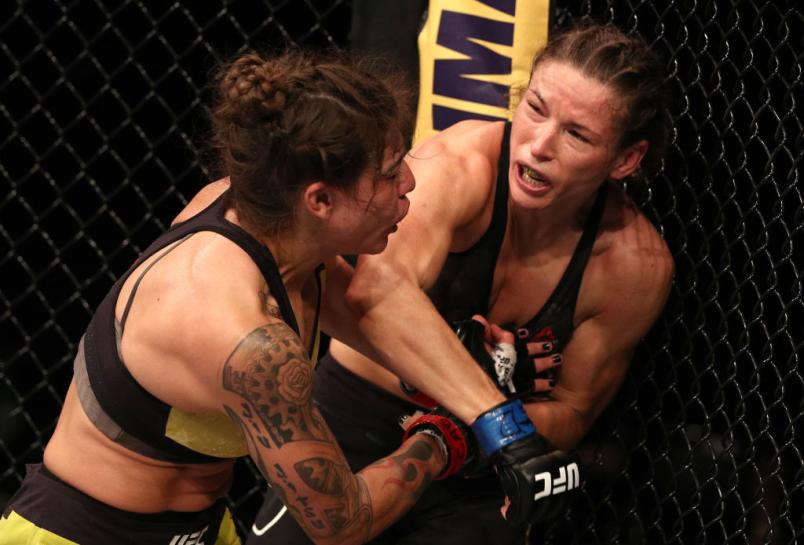 “First, I was stuck in Ukraine and it was hard to train, but when I made it back to America and I was training at American Top Team, I started to up my level, technically and everything.”

Withstanding the uncertain circumstances regarding her training, and injuries which delayed her return to the Octagon even further, Moroz admittedly struggled, but didn’t let her struggle define her.

“Sometimes, I feel terrible, but I have a lot of support and big love for my fans,” the 30-year-old said, adding that her husband, coaches and training partners’ support helped her through the rough waters. “I always believed that I’d be back in the Octagon. I trained hard and, as always, in my heart, I was strong.”

That strength is something “Iron Lady” has had to carry with her throughout her career, as the first and only Ukrainian woman on the UFC roster.

“I’m just one girl, I came from a small village and now I’m fighting in the best organization in the world,” Moroz said. “It was so hard, but I’m now in the best arena; I’m excited and feel a lot of emotions right now.”

Savoring the emotions surrounding her Octagon return while she can, Moroz said all of the feelings she has will be shut off once her feet hit the canvas on Saturday inside T-Mobile Arena — something that could be the key to victory, as her bout with Mariya Agapova has been ignited by some past drama, evolved now into a little bit of bad blood.

Agapova claims Moroz, her former teammate, neighbor and friend, tried to “ruin her career” with a few interviews she gave while Agapova was struggling between Octagon appearances.

When asked about it, Moroz smiled and explained that she doesn’t focus on who she’s fighting, instead thinking of them simply as an opponent and ignoring any past relationships or other things that would get in the way of her success.

“She’s crazy, that’s it,” Moroz said with a chuckle. “I don’t want to talk too much about her. I’m not focused on her; I’m focused on me and I want to come into the Octagon and show my levels, technically, show a good fight. So, talk about Mariya? No need for me. Her intellect is zero. She’s not a good person for me.”

While there’s definitely only room for one “friends turned foes” storyline on this card, there’s always room for performance bonus-worthy matchups that are sure to deliver, especially in a dynamic women’s flyweight division.

Moroz believes for Agapova, who spent most of her camp fine-tuning her wrestling and grappling, it doesn’t matter what her gameplan is, because she’s simply better in every position. 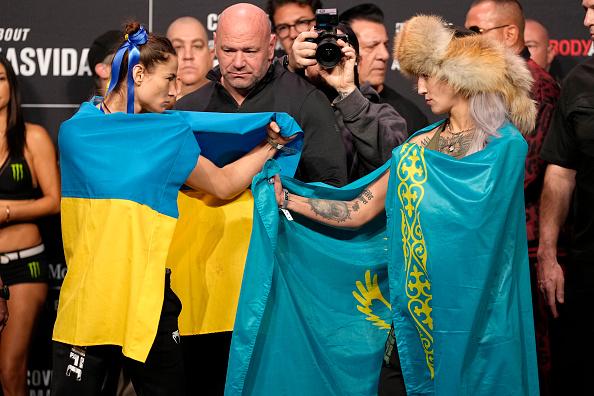 Opponents Maryna Moroz of Ukraine and Mariya Agapova of Kazakhstan face off during the UFC 272 ceremonial weigh-in at UFC T-Mobile Arena on March 04, 2022 in Las Vegas, Nevada. (Photo by Jeff Bottari/Zuffa LLC)

Opponents Maryna Moroz of Ukraine and Mariya Agapova of Kazakhstan face off during the UFC 272 ceremonial weigh-in at UFC T-Mobile Arena on March 04, 2022 in Las Vegas, Nevada. (Photo by Jeff Bottari/Zuffa LLC)

As the two products of American Top Team prepare to enter the Octagon, Moroz won’t be fazed by much — not her emotions, her excitement, or her opponent.