A 'Reinvented' Leah Letson Returns To The Octagon

Leah Letson Has Had To Overcome The Unthinkable After Nearly Three Years Away From The Octagon, But Makes A Return With A 'Reinvented' Version Of Herself Against Felicia Spencer
By Thomas Gerbasi, on Twitter @TGerbasi • Nov. 10, 2021

“Nobody wants this win more than me.”

Leah Letson’s words are familiar to anyone who has followed the fight game for any length of time, but as she approaches her first bout in nearly three years against Felicia Spencer, they hold a little more weight considering what the Wisconsin native went through to get here.

Don't Miss Any Of UFC Fight Night: Holloway vs Rodrigues On ESPN+

“For a while, I was concerned that I wasn't ever gonna be healthy enough to fight again, and it was a very depressing and difficult couple years for me because of that,” she said. “Honestly, I had no idea if I was gonna ever be able to fight again.” 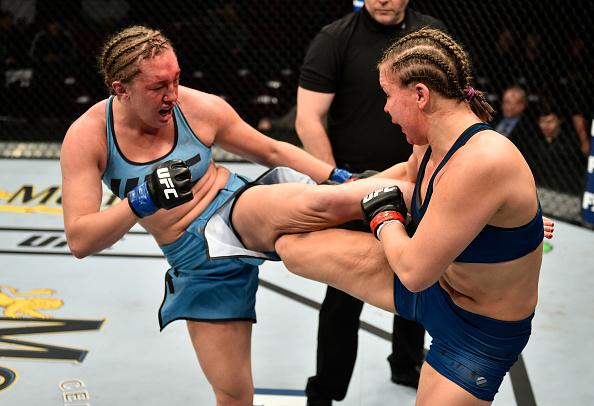 The 29-year-old calls it “the worst feeling in the world” and that’s as accurate as you can get to describe fearing that a host of health issues were going to keep her from doing what she loved. So while she should have been celebrating and waiting for the next step in her career after she won her UFC debut in November 2018, instead she faced an uncertain future, one that might not include fighting. And if it didn’t include fighting, she was unsure of what she was going to do next.

“I called it my quarter life crisis because I didn't know what I was gonna do if I couldn't fight, and literally nothing made me happy,” said Letson. “The thought of me doing anything else didn't have the same ring to it as being a professional fighter. That's my passion and what I truly believe what I was meant to do with my life. So I was trying to find any little thing that could make me even a fraction as happy as fighting makes me, but I was not successful. And so that was another reason I was very stressed out and depressed. If I can't fight again, I don't know what I'm gonna do because there's nothing else in this world that makes me as happy as fighting does.”

RELATED: Fight By Fight Preview | Fighters On The Rise | Max Holloway Isn’t Afraid of The Hard Path | What Yair Rodriguez Wants With All His Heart

And it wasn’t until early this year that she got the light at the end of the tunnel she needed, as her health issues were addressed, putting her a step closer to calling up her manager and telling him she was ready to fight again. But as good as she began feeling in the gym, she needed to hear from the pros that she was clear to resume her career.

“I had been working my way back into training hard and feeling healthy enough that I was gonna potentially fight again back in February,” said Letson. “That's when I first started training hard again and working my way back into the gym. Then in July, I went out to the (UFC) Performance Institute in Vegas and I got assessed and basically got the green light from them that as long as I did 145 and didn't have a hard weight cut that they felt it was safe for me to fight again. My doctor felt the same way, and that was an amazing feeling. And instantly, when I got home and went to the gym, there was a little bit more of an intensity in me because I knew I was gonna have a fight eventually, and that was incredible."

Just like that, Letson had her career – and her life – back. And as she prepares for her return and a chance to add to her UFC win total, Leah “Nidas” found a new gear in the gym that she believes will surprise some people.

"It's been a rough couple years."

After nearly three years away from the Octagon, Leah Letson (@LeahNidasMMA) is thrilled to be back in action at #UFCVegas42 🔊⬆️ pic.twitter.com/RLbN8F239V

“It definitely feels like me, but it feels like a new and improved version of myself – I’m more educated, I have a ‘train smarter, not harder’ mentality, and I've learned about my body and myself so much,” she said. “I got to basically reinvent who I am as a fighter. My skill set is gonna be way better and way different than anything you've ever seen before."

And though no one would wish the last few years she had on anyone, if we’re looking for a positive spin on Letson’s recent journey, it’s that she’s returning to a featherweight division that looks very reminiscent of the way it was shortly after her win over Stoliarenko.

“I try to look at the silver lining in everything and I believe everything happens for a reason,” she said. “This is the perfect time to come back and into my division, and hopefully it starts to get built again and take off. The pandemic kind of ruined 2020 anyway, so that was a year that I wouldn't have been able to probably fight that much anyway. So it is perfect timing.”

How perfect? In a wide-open division, a statement-making victory over former world title challenger Spencer could very well put her in the conversation for a shot at 145-pound queen Amanda Nunes. Yeah, it’s a wild story, but it could happen.

Leah Letson poses for a portrait during a UFC photo session on November 10, 2021 in Las Vegas, Nevada. (Photo by Mike Roach/Zuffa LLC)

“Who wouldn't think that's awesome?” Letson laughs. “It's crazy to think about it, but that is a possibility. Obviously I'm not looking past Felicia at all. She's a very tough opponent, but the possibility of winning this fight and then getting a title fight, it's real, and I'm definitely excited about that possibility.”

I don’t think I’d be out of line to say that Letson is excited about a lot of things these days. She’s figured out the right way to train, she’s about to get into a fistfight for the first time since 2018, and she even got engaged. But despite the reality that the dark days are over, she doesn’t forget to appreciate that journey and appreciate that on Saturday, she returns to the only place she wants to be.

“No one has had to go through as many health struggles as I've had to go through, and even before I got to the UFC, I had to put my career on hold to be deployed for the Air Force, and there were constant obstacles the whole time that I've been fighting,” Letson said. “So I definitely appreciate it more than the average fighter, especially with all the health struggles and not knowing if I was going to be able to return. It means a lot.”