A New Beginning For Kelvin Gastelum

Kelvin Gastelum Regained His Hunger, Stopped His Losing Skid And Now Had Robert Whittaker Back In His Sights.
By E. Spencer Kyte, on Twitter @spencerkyte • Apr. 15, 2021

Whenever fans hear professional athletes talk about struggling with motivation, feeling burnt out, or questioning whether they have the drive to continue competing in their given pursuit, they almost immediately push back — hard — perplexed by how someone could possibly not be permanently excited and filled with energy to “play a sport for a living.”

Between their own childhood dreams of stepping up to the plate for the Dodgers, the naïve thought that suiting up for the Boston Celtics is just a game-night endeavor, and all the “find a job you love, and you’ll never work a day in your life” talk that gets carelessly thrown around all the time like it’s factually correct, all kinds of people have a pretty warped opinion about the trials and tribulations athletes go through during the course of their careers.

Unlike a good mix tape, it’s not all rise — there are peaks and valleys that need to be traversed, and for the better part of a year, Kelvin Gastelum was stuck in one of those valleys, feeling all the things that fans can’t believe a professional athlete could possibly go through.

“After three losses, life humbles you and some doubts start to creep in,” said the former Ultimate Fighter winner, who got back into the win column in February at UFC 258 and looks to pick up his second victory of 2021 when he takes on Robert Whittaker this weekend. “(You start questioning), ‘Do I even still want this? Is this something that I still want to do?’ Doubts and fears started creeping in and those are the demons I was talking about. ‘Do I even want to continue in this career’ because it’s taken a toll on me, that’s for sure.

“After three losses, it was hard to get motivated again because those fears and doubts start creeping in and that was something I had not gone through before. It was something that I had to battle.”

While the 29-year-old had encountered setbacks before and fought a very public battle against the scale in his days competing at welterweight, there had never been a point where the confident Kings MMA representative questioned his career pursuit.

From the time he made his Cinderella run to the finals of Season 17 of The Ultimate Fighter through to his interim middleweight title clash with Israel Adesanya two years ago, Gastelum was certain that championship gold was in his future and nothing could convince him otherwise. 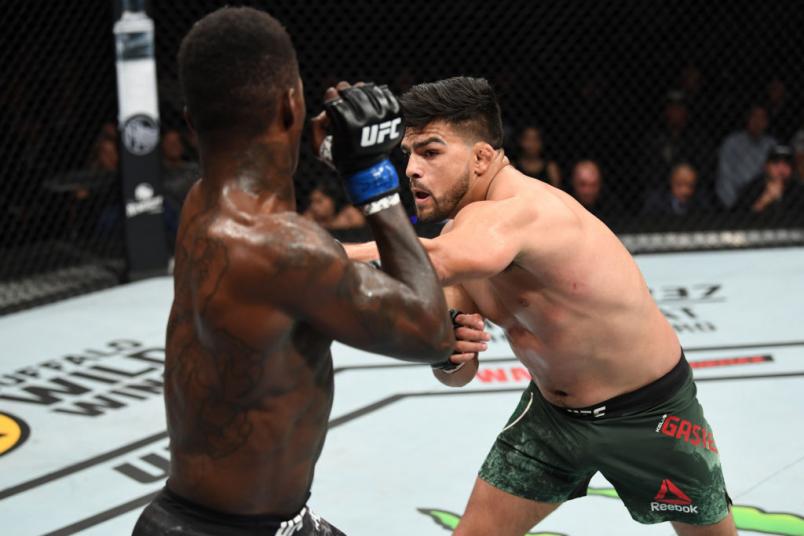 But after losing to Adesanya in an instant classic at UFC 236, the Yuma, Arizona native dropped a split decision to Darren Till, giving him the first two-fight losing streak of his career. Eight months later, on Fight Island, Gastelum lasted just 78 seconds against Jack Hermansson, tapping to a heel hook and turning his two-fight skid into a three-fight slide.

That’s when the quiet questions circulating in his head grew louder, and the middleweight contender knew he needed to make some serious changes.

“I’ve learned to not look ahead to things like ‘Who will I be fighting next? Where will it put me in the rankings? Will I be getting the title?’” explained Gastelum, who earned a clean sweep of the scorecards against Ian Heinisch in February before jumping at the chance to replace Paulo Costa opposite Whittaker in Saturday’s main event. “These are things that don’t matter until I get my hand raised, and so I’m focused 100 percent on the fighter in front of me, but that’s something that I hadn’t done for a couple fights.

“For my last few fights, I kind of got a little arrogant and felt like I wanted to get back to the title as soon as I could, so I was thinking about those things that didn’t really matter, and that was a big mistake on my part.”

In addition to shifting his focus solely to the task at hand, Gastelum began working with a mental coach, putting a great deal of emphasis on visualization, and reacquainting himself with the young, hungry version of himself that won Season 17 of The Ultimate Fighter all those years ago. 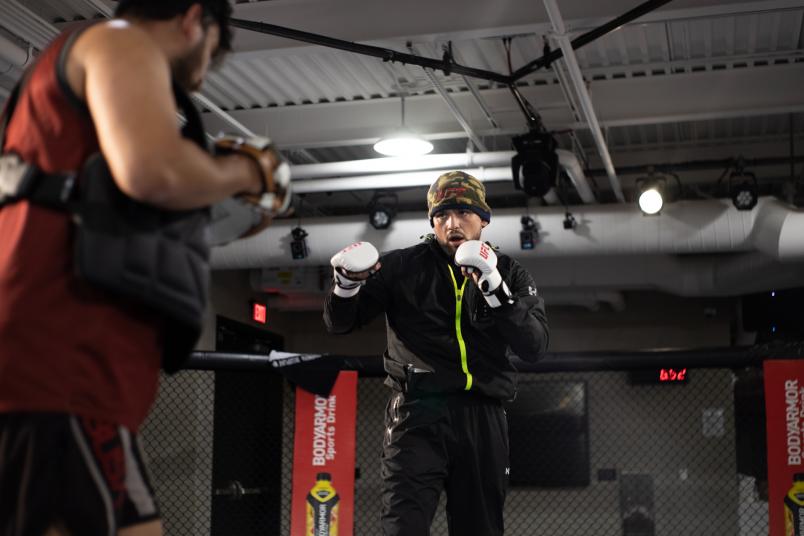 Kelvin Gastelum prepares for his UFC 258 bout against Ian Heinisch on Wednesday, February 10, 2021 at the UFC Performance Institute in Las Vegas, Nevada. (Photo by McKenzie Pavacich)

“I never thought in my life that I would be working with a mental coach, but for my last fight, I did acquire one and I felt the benefits of it,” he said. “I went through it for my last camp, my last fight against Ian Heinisch and the results were tremendous, and I’m using him again for Robert Whittaker and I’m going to continue using him.

“Some of it is visualization — visualizing the best version of myself; walking into the Octagon; owning the Octagon — and recently I was told to go back and visualize myself as that kid on The Ultimate Fighter because we need to get that hunger back, and get that mentality back; get that KG back and team it with all this experience and knowledge that I’ve acquired through the years, and that’s what I’m hoping to do.”

In many ways, this fight with Whittaker feels like a perfect way to blend the two — the young, hungry Gastelum and the older, wiser, more experienced version who has battled back his demons and feels the tides turning in his favor — as this is a matchup that was on the books before and never came to fruition.

Two months before Gastelum faced Adesanya for the interim middleweight title in Atlanta, Georgia, he was in Melbourne, Australia, readying to face Whittaker, the undisputed UFC middleweight champion at the time.

The two had wrapped a season coaching opposite one another on the show that launched each of their respective UFC careers, and were less than 24 hours away from stepping into the Octagon when the fight was abruptly called after Whittaker was rushed to the hospital, where he underwent emergency surgery due to an abdominal hernia and a twisted and collapsed bowel. 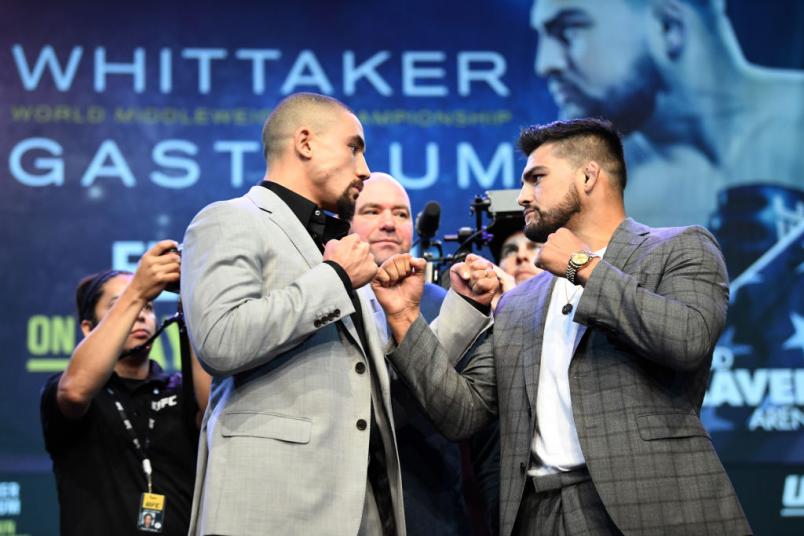 “It feels familiar in a sense because I’m fighting him and this was supposed to be done a long time ago, which is why I felt so confident accepting the fight,” Gastelum said of the pairing with the former middleweight champion, who has earned consecutive unanimous decision victories since dropping the title to Adesanya at UFC 243. “I wasn’t hesitant at all to take the fight, and we feel confident going in. I’ve prepared for him before and we know what we have in front of us.

“At the same time, I feel like I’ve changed so much and I’ve grown so much and I’ve gone through so much in those couple of years (since we were supposed to fight), so this is a new beginning for me,” continued Gastelum. “I feel like the fight against Ian Heinisch was a restart for me in my career — mentally, physically; in all aspects of my life it was a restart for me.”

Even though it has only been a couple of years since their cancelled championship engagement, it feels like a lifetime ago to Gastelum, who relied on friends, family, teammates, and coaches to help beat back the doubts and stoke the smoldering embers of self-belief until they became a roaring fire once again.

It took time and patience, but day-by-day, the perennial contender got himself back to where he always knew he belonged — standing triumphant in the center of the Octagon — and now he’s ready to build on feeling by taking on Whittaker this weekend.

“Down deep in my heart, I knew that I still had it in me, even though it was hard to get motivated and those fears and doubts were creeping in, so I would take it one day at a time,” said Gastelum, reflecting on his difficult road back to the win column. “It was a year-long process, and every day was a struggle to get up and try.

“But I feel like the tides have been turning in my favor. I feel like I’m at a different point in my life, in my career, and as a person. I feel like I grew a lot in these last couple years. When I was supposed to fight for the title, the Kelvin Gastelum back then is not the same as the guy that is stepping into the Octagon against Rob on April 17. I’ve grown and matured; I’m not the little 21-year-old guy from The Ultimate Fighter anymore.

“I feel refreshed and I’m ready to restart my career, and that starts with Robert Whittaker.”