In A Stacked Houston Pay-Per-View, Don't Miss These Fighters On The Come-Up
By E. Spencer Kyte, on Twitter @SpencerKyte • Jan. 31, 2020

One month and two events into the year, 2020 is already shaping up to be an exciting time inside the UFC Octagon, and this week’s return to pay-per-view should only continue that trend.

UFC 247 takes place on Saturday evening at Toyota Center in Houston, Texas, headlined by a pair of championship fights featuring two of the more dominant talents in the sport today — light heavyweight titleholder Jon “Bones” Jones and women’s flyweight queen Valentina “Bullet” Shevchenko. Each are set to face off with the top contender in their respective divisions and although Dominick Reyes and Katlyn Chookagian enter at long odds, the ever-present potential of an upset and a seemingly unbeatable champion (or two) falling has kept interest in this weekend’s pay-per-view main card high.

But before the final five bouts of the evening hit the cage, the preliminary portion of Saturday’s event provides a full camp opportunity for a UFC sophomore who hung tough in his short-notice debut and a chance to get a closer look at the next two members of the surging Fortis MMA crew poised to join teammates like Geoff Neal and Diego Ferreira in making waves in the UFC rankings. 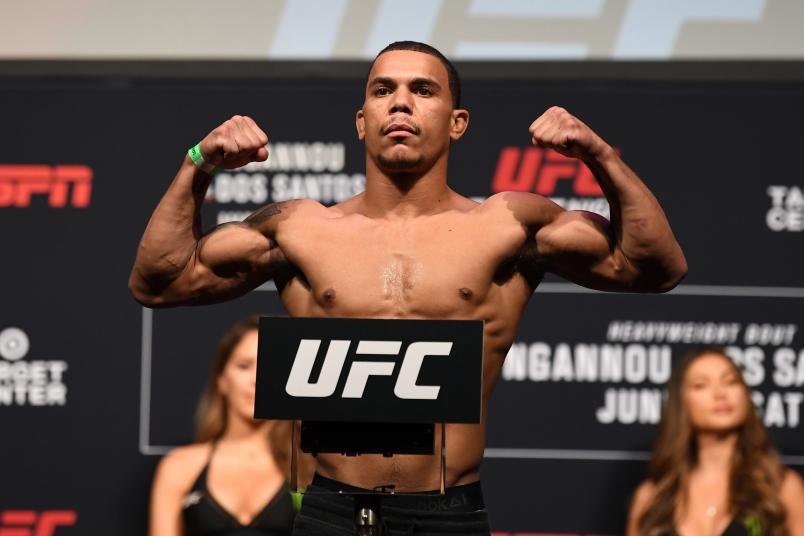 Newson made his promotional debut on two weeks’ notice at the end of June, venturing to Minnesota to square off with Ricardo Ramos and dropping a unanimous decision to the talented Brazilian prospect. This time around, however, the 30-year-old bantamweight gets the benefits of a full camp as he readies to make his second trip into the Octagon to take on Contender Series alum Domingo Pilarte in Las Vegas.

Despite the setback last summer, Newson has showed flashes of potential, both in that bout and in his last several appearances before arriving in the UFC. A Brazilian jiu-jitsu brown belt with professional boxing experience and a background in tae kwon do, the California-born, Oregon-based fighter is compact and strong for the division, displaying good movement and fluidity inside the cage. He’s also flashed legitimate fight-changing power, including an 80-second knockout in his final appearance before getting called up to the biggest stage in the sport.

After earning a contract on Season 2 of the Contender Series, Pilarte was out of action for more than a year before finally making his UFC debut last summer, losing a split decision to Felipe Colares. Prior to that, however, the Houston-based “Son of Fire” rattled off five straight victories, including a win over LFA standout Adrian Yanez and the second-round submission win over Vince Morales that earned him a place on the UFC roster.

The deck was stacked against Newson the first time around, as he was thrust into bad stylistic matchup against a promising youngster with limited time to prepare. This time, however, he’s had a full camp and those initial 15 minutes in the cage with Ramos to draw from as he looks to make the most of his second chance to make a quality first impression.

After closing out 2018 by claiming the vacant LFA bantamweight title, chances are Johns’ “wish list” for 2019 included reaching the UFC and earning his first victory inside the famed Octagon.

In June, the 25-year-old Fortis MMA representative scored a dominant decision win over Richie Santiago on the Contender Series, impressing Dana White with his relentlessness and securing a contract in the process. Less than three months later, he ventured north of the border to square off with fellow undefeated bantamweight hopeful Cole Smith in his backyard, edging out the Squamish, British Columbia native by split decision in Vancouver.

Now 10-0, Johns is another in the growing list of emerging talents to reach the UFC from the Dallas-based gym led by Sayif Saud, and like several of his teammates, he has the potential to be much more than just another guy in the bantamweight division. Johns faced a quality collection of talent under the LFA banner on his way to the Octagon, and while Smith was only a single fight into his own UFC journey, the gritty former Battlefield Fight League champ is no easy out.

This weekend, he looks to make it two-in-a-row in the UFC and 11 straight overall when he takes on 26-year-old MMA Lab product Mario Bautista, who dropped his short-notice debut to divisional standout Cory Sandhagen, but rebounded with a quality win over Jinsoo Son six months later.

Bantamweight is brimming with talent at the moment, so there is no need to rush Johns into the fray. That said, don’t be surprised if “Chapo” forces the issue himself by continuing to post quality wins and impressive performances each time out.

Nicknames in MMA can be a funny thing sometimes because, you know, they’re not always super-accurate. Take long-time lightweight and all-around great dude Sam Stout, known throughout his career as “Hands of Stone.” The Canadian veteran made 20 appearances in the Octagon, registering nine victories, only one of which came by stoppage due to strikes.

It was gorgeous, but still.

I say all that to now say this: Lingo’s nickname is “Lights Out” and it is completely appropriate.

The 25-year-old featherweight, who trains alongside Johns at Fortis MMA and takes on fellow new arrival Youssef Zalal on Saturday, has won his last three fights by first-round stoppage in a combined 63 seconds. In fact, he’s earned five of his seven career wins (against no losses) before the midway point of the opening round, making it clear that whether it’s strikes or a submission, Lingo is always a threat to end things abruptly.

Though he never reached the championship heights several of his teammates did while competing under the LFA banner, that’s more a function of how quickly he rose through the ranks, as the belt was vacated last April and Lingo’s win in August likely put him in position to challenge for the title this year had the UFC not come calling.

Zalal is another LFA graduate from a great team (Factory X Muay Thai) with a penchant for finishing fights early, which should mean that Saturday’s fight card will get off to an explosive start.

The spotlight will be on both Lingo and Johns as more and more fans are finally starting to realize that Fortis MMA is one of the top gyms in the sport today and turning out elite prospects on the regular. Given how well their teammates have done in the past and their combined track records thus far, something tells me both will be just fine with a little more attention and some elevated expectations this weekend.