The Unrivaled Drive Of Ed Davalos

While It Lacks A Cinderella Ending, The Story Of Ed Davalos Will Inspire You To Attempt The Unthinkable
By Walker Van Wey, UFC FIGHT PASS • Aug. 11, 2021

A few defining characteristics of a collegiate wrestler are discipline, hard work and pride. Very few have had all three and then some put to the test the way that Ed Davalos did back in 1980.

Looking to take a step away from wrestling-heavy regions in college but still staying close to the sport he loved while attending a university, Davalos committed to Maryville College in 1979. Caught somewhere between Nashville and Asheville, Davalos was a long way from home but right where he thought he needed to be.Subscribe to UFC Fight Pass

“The strategy there was that in the South they don’t have a great caliber of wrestler, but coming out of Jersey, everything north of the snow belt is big wrestling,” Davalos laughed. “We go there to realize nine out of ten of them are from Jersey. We wrestle D-1 schools down in the South like the University of Tennessee, Georgia, Georgia Tech, and we clean up, so we think it’s great.”

Davalos made Nationals his sophomore season but when his mentor, Coach Elia, took a job at Carson Newman College, Davalos went with him. Despite being met with immediate success, Davalos came straight back to Maryville College after only one semester away. 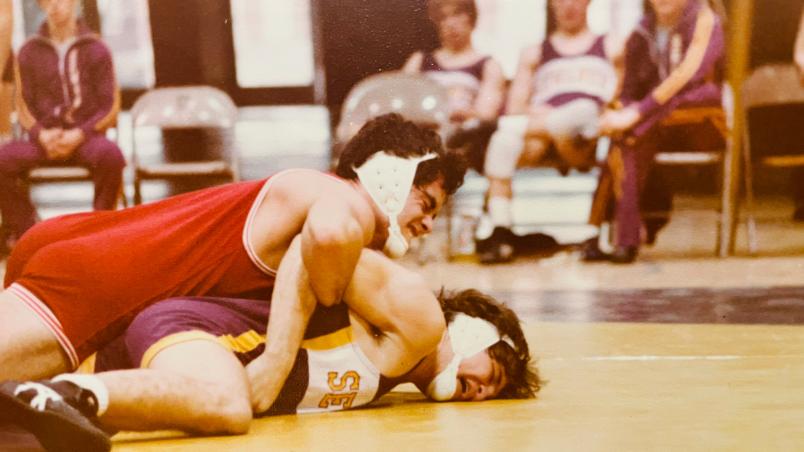 When he returned, however, he realized the wrestling program was collapsing quickly.

There was no coach, just a handful of wrestlers even interested, and no school support, but Davalos wasn’t going to accept his position.

“I went to the athletic director and said, ‘Listen, I believe as long as you don’t close the program and let me compete at the regional level you’ll get a ticket to the NCAAs,” Davalos explained. “He probably didn’t think I could do it, so he said yeah.”

By Davalos’ senior season he was completely on his own.

He was the lone representative of Maryville College in NCAA wrestling. No wrestling room, no training partners, just a car full of gas and a hell of a lot of gumption.

“I’m on my own going to other schools to train and then going to the regional tournaments by myself and winning them,” said Davalos. “I was lucky that they said, ‘let’s see if he can pull it off,’ and I did it just from perseverance and just doing it on my own.”

The experience validated to himself, his school and his peers that he was as disciplined of a wrestler as there was and it gave him another one-of-a-kind experience: a bonding opportunity with the only man more driven than himself. His father.

“I grew up as one of ten, so my dad was working two jobs all the time,” Davalos explained. “He never saw me wrestle in college even though he was a crazy fan in high school. The first time he saw me in college was up at the Coast Guard Academy in New London, Connecticut. I was by myself so I had my brother to sit in my corner.” 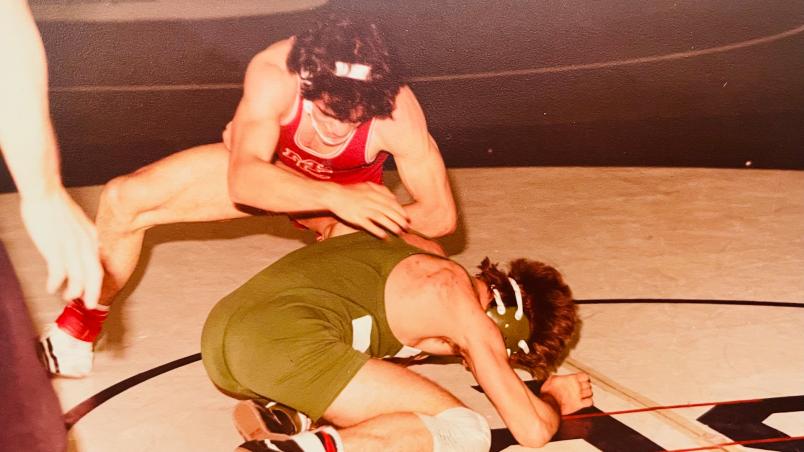 Davalos’ career ended without a Cinderella story. No National title, no parade in Maryville, nothing. Regular acknowledgements to the one-man program were made in school publications and casual conversation around the university, but the story of the one-man band would go undiscovered for another 30 years after the final match in school history.

“I get a call in 2010 and they were like, ‘this is crazy,’” Davalos recalls. “’That’s a crazy story to be able to compete nationally without a coach. Just solo, no guidance, no plan, just if you think you can do it go do it!’”

Davalos was inducted into Maryville College’s Wall of Fame.

He was the final man to put the wrestling program on the map and will likely and rightfully be the last wrestler inducted.

Now 63 years old, Davalos lives in Atlanta, working for Motorola Solutions. All three of his children are now older than he was when he walked off the mat for the final time. His youngest daughter will frequently catch him up on the UFC and the current state of combat sports as he’s let his career, family and other responsibilities take the wheel in his later years.

While she may be in the know now, she doesn’t realize that he was only about a decade too early or maybe the sport she enjoys in Chicago may have had his name somewhere in the rafters as well.

“I wish they had that when I got out of college,” Davalos said. “That would have been for me; I would have gone into that cage. It just wasn’t around back in the day in the really early 80s.”

Father Time may have taken his UFC dream away from him long before it began, but even time can’t take away what Davalos was able to do in that final year at Maryville College.