Impa Kasanganay, A Newcomer To The Welterweight Division, Shares One Of His Biggest Sources Of Motivation And Inspiration — His Relationship With His Father
By Maddyn Johnstone-Thomas • Sep. 16, 2021

The night Impa Kasanganay suffered the first loss of his career, his father told him two things that he has held on to: “‘In order to know my glory, you must first understand my story, and in order to get to it, you got to get through it.’”

Kasanganay promised his father that he would finish his next fight, a promise which he followed through on when he submitted welterweight Sasha Palatnikov in April.

The 27-year-old was 8-0 heading into his fight with Joaquin Buckley in October 2020 before he was knocked out in the second round. The loss isn’t something that he dwelled on, but instead he viewed it as a “blessing in disguise.”

“I realized that wasn't something that I would hold my head on for my career,” Kasanganay told UFC.com in a fight week interview ahead of his bout at UFC Fight Night: Smith vs Spann. “I have much higher standards for myself and higher goals, and when you have a moment, you have to own the failure and get the success, and that was my main thing. I owned the failure, so I don't have to worry about what people are saying, what videos come out or whatever, because I know what I'm going to do. For me, I’m going to be champion. I don't stress about that moment.”

He views it as a blessing in disguise that led him to his new home at Sanford MMA in Deerfield Beach, Florida. When Kasanganay made the move to Sanford, he also made a move to a new weight class: welterweight. His fight against Palatnikov was his welterweight debut, in which he came out victorious. 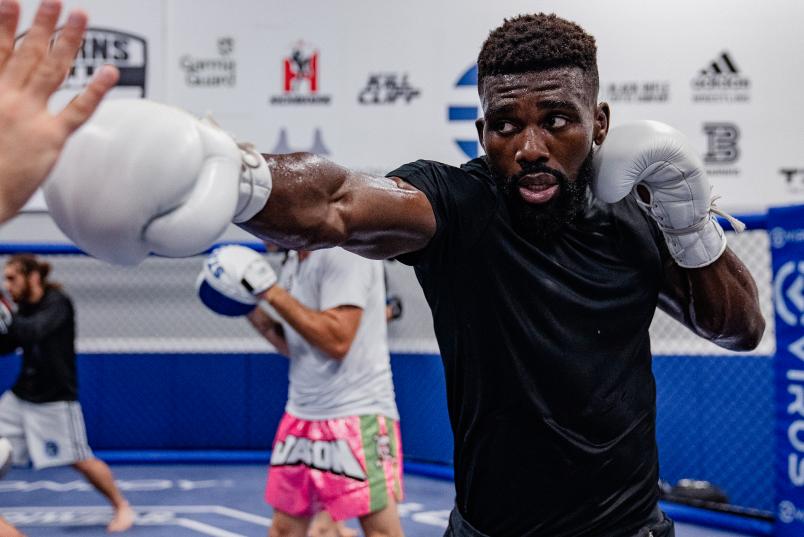 “Gosh, it has been one of the best moves of my life,” Kasanganay said. “The environment, the team, the culture, it's amazing. There's nothing like being at Sanford and I'm just grateful to be a part of it. Every single day going with top talent fighters, all the coaches love it in a different way and that thoroughly feeds to us fighters and it really feeds to me.  It's an environment where I’m surrounded by the best. It inspires me to become the best and be the best.”

"My ultimate goal is to claim victory and finish fights."

Impa Kasanganay (@KingImpa) talks about training at @MMASanford, his mindset after getting a finish in his last fight and what he thinks of #UFCVegas37 opponent Carlston Harris 🔊⬆️ pic.twitter.com/FMzc48pCkr

Not only will the coaches of Sanford be in Kasanganay’s corner this weekend, pushing him to be the best, but his father will also be in his corner.

“It's really cool to have him in my corner and this time the goal is to claim the victory with him in my corner and we're going to go do that,” Kasanganay said. “It’s my last fight of my first contract in the UFC. He has been with me since the beginning, literally, since day zero and since the first day I stepped into a cage and now the Octagon. Having him there means more than I can explain. My dad is everything that I want to be.”

This weekend “Tshilobo” will take on Carlston Harris, who holds a record of 16-4 with four victories via knockout and five by submission. Harris is riding a four-fight win streak heading into his bout with Kasanganay.

“Skill wise, he has his techniques that he brings, like solid body locks and all that, but I just think, in general, he comes to fight in a cool way,” Kasanganay said. “He's loose, he's crafty, he's funky, but he also has solid shots as far as striking. He knows what he wants to do and sets out to do it. I respect how he fights; he's a warrior, so I like that about him.”

Even though Harris has been fighting since 2011, this will only be his second walk into the Octagon, after making his UFC debut in May. 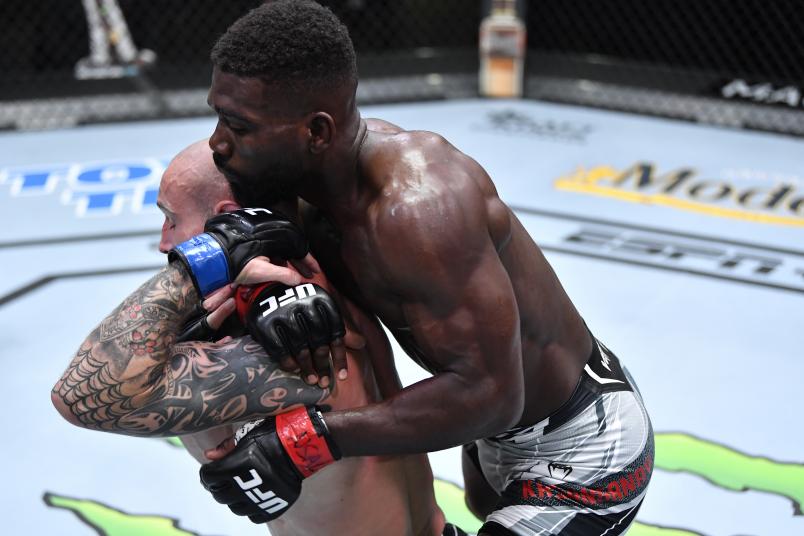 Impa Kasanganay works to secure a rear choke submission against Sasha Palatnikov of Hong Kong in a welterweight fight during the UFC Fight Night event at UFC APEX on April 10, 2021 in Las Vegas, Nevada. (Photo by Chris Unger/Zuffa LLC)

“I think it's a blessing to be in the UFC longer,” Kasanganay said. “The APEX is home for me. It’s my fifth fight at the APEX now from Contender Series and UFC. But when I first started fighting when I was 24, I just realized that everybody would have more experience than me. You can’t worry about it, you just got to live with it and move forward.”

Looking ahead to UFC Fight Night, Kasanganay is excited to show the dominant fighter he is, and how he has become more composed and refined since joining Sanford. Control is the word of the night on Saturday.