Belal Muhammad Has Made It Clear He's Ready To Challenge For The UFC Welterweight Title By Taking On His Second Fight In A Month, But He Must First Make It Past Leon Edwards
By E. Spencer Kyte, on Twitter @SPENCERKYTE • Mar. 12, 2021

Belal Muhammad intended to stay in Las Vegas following his fight with Dhiego Lima at UFC 258. Not only was his close friend and former roommate Jared Gordon set to compete the following weekend, but the weather in Vegas is far more enjoyable than the weather in his native Chicago at this time of year, so it felt like a two birds, one stone situation

But the streaking welterweight’s short-term plans changed because his long-term plans were going exactly as he’d hoped.

“I wanted to stay active, I wanted to stay in fight mode, and so it literally worked out perfectly,” said Muhammad, who out-hustled Lima last month to push his winning streak to four before jumping at the chance to replace Khamzat Chimaev opposite Leon Edwards in this weekend’s main event. “This is the best opportunity that could have happened for me in my career.

“I dreamt it, I talked about it, and I kept saying it to myself, ‘It’s gonna happen. It’s gonna happen. Everything happens for a reason’ — and it happened,” continued the excited emerging talent, who speaks at a tempo comparable to the relentless pace he puts on his opponents inside the Octagon. “This is the biggest thing that could have happened for me — main event, on this stage.”

Muhammad has been one of the best kept secrets in the 170-pound weight class over the last handful of years — a relentless grinder who weaponizes his pace, has a great beard, literally and figuratively, and whose lone loss in his last nine fights came against Fortis MMA standout Geoff Neal.

MORE UFC VEGAS 21: Fighters On The Rise | Fight By Fight Preview | For Charles Jourdain, It's Never Over | Significant Stats | Misha Cirkunov Plans To Make Up For Lost Time | Ryan Spann Must Win The Battle Of Wills | Davey Grant Is Prepared For Any Obstacle

His effort against Lima last month served as a bit of a coming out party, as the attention focused on the welterweight championship fight at the top of the card prompted folks to check in on the other action in the division taking place earlier in the night, where Muhammad showed what makes him such an intriguing dark horse in the division.

Despite getting his lead leg battered, the 32-year-old never stopped coming forward, firing more than 250 strikes in Lima’s direction while mixing in double digit takedown attempts in the three-round fight. Watching him maintain his torrid pace was tiring, but it also illustrated why the steadily improving former Titan FC champion is one of those unheralded names fans might not know, but fighters absolutely respect. 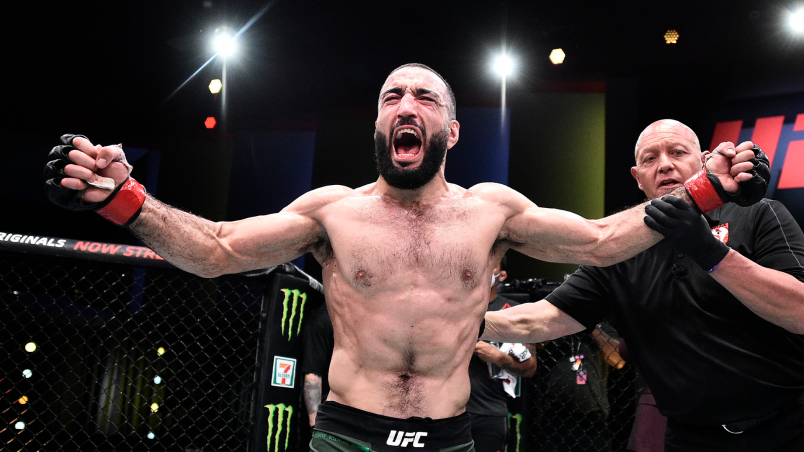 Belal Muhammad celebrates after his decision victory over Lyman Good in their welterweight bout during the UFC Fight Night event at UFC APEX on June 20, 2020 in Las Vegas, Nevada. (Photo by Chris Unger/Zuffa LLC)

“I always get the respect of fighters and coaches and I love the messages I get from them because they know how good I am,” said the engaging Muhammad, who has become a must-follow on social media over the course of his rise in the rankings. “They understand the sport, they see the style and the effort that I bring, the different techniques I bring to the cage.

“That’s all I really care about is the respect of my peers,” he added. “As long as I have that, nothing else really matters.”

He indeed has that, and with a victory over Edwards this weekend, he’ll have a lot more.

The talented 29-year-old hailing from the West Midlands by way of Kingston, Jamaica arrives in Las Vegas on an eight-fight winning streak, but is set to compete for the first time since the summer of 2019. Last year, the coronavirus scuttled a March date against former champion Tyron Woodley before he spent the previous several months tethered to Chimaev in a star-crossed matchup that was announced and delayed a number of times before the promotion was finally forced to move on from the pairing this time around.

“There are a lot of people out there talking about ‘What does Leon have to gain from this?’ and yada yada yada, but he’s got everything to gain from this — he’s been out for so long,” he said of this weekend’s main event matchup.

“This isn’t No. 3 versus No. 13 — this is a guy that is on an eight-fight winning streak versus a guy that has won eight of his last nine. That’s how the old UFC worked when there were no rankings. There would be no problem with this fight; people would be loving this fight.

“I want these top fights,” continued Muhammad, who was ready to step in for either half of the UFC 258 title fight should either champion Kamaru Usman or challenger Gilbert Burns not been able to compete that evening. “I want to be in there with top guys.

"It's an addiction to winning."@BullyB170 talks about what was going through his mind when he was offered the main event slot with Leon Edwards, why he's ready for the step up and what fans can expect from #UFCVegas21 🔊⬆️ pic.twitter.com/R55fQNgvjp

“I want to show that I’m ready for anybody, at any time, and this is one of those things where people are asking me, ‘Did you have to think about it?’ I didn’t have to think about it at all because I’ve been working my whole life to be a UFC main event and fight this guy, which gets me one fight closer to a title shot.

“My goal is the gold,” he added. “I’m a five-round fighter and I’m going to show it and it’s going to make me a staple in the main event.”

While turning down this opportunity was never a consideration for the talented Chicago native, another piece of what made it so easy to accept a short-notice assignment against the third-ranked Edwards is that everything went so smoothly throughout his last training camp, straight into fight week, and through the bout with Lima last month.

After years of splitting time between training at home and logging time at Roufusport in Milwaukee, the pandemic prompted Muhammad to shift all this training to the “Second City,” where he works with striking coach Mike Valle and a cast of fighters that includes Contender Series standout Ignacio Bahamondes, featherweight star Yair Rodriguez, and former TUF Latin America competitor Horacio Gutierrez.

“Everything clicked perfectly, especially during fight week,” Muhammad said of his first full fight camp working with the Valle Flow Striking crew. “The best thing about it was the warm-up — it was next level for me and it was the first time I’d done it. 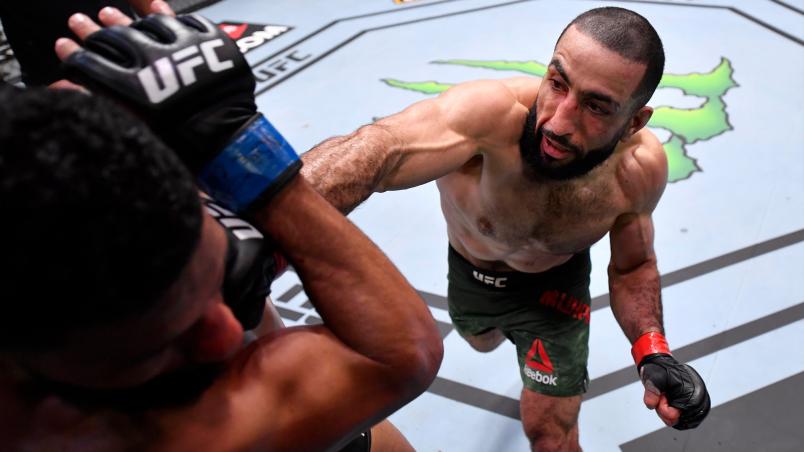 “We sparred a little in the back — it was a quick warm-up, just sparring, instead of breaking it down into five minutes of different things, but that’s not how a fight is. A fight is chaos and it got me ready for that.

Now, with his grand plan for 2021 already playing out exactly as he’d hoped, Muhammad is keen on making the most of his main event assignment this weekend and then chasing down another massive opportunity soon after.

Don't Miss A Second of Saturday's Action With Your ESPN+ Subscription

“I want to strike while the iron is hot, so when I get this win, I’m calling for the title shot,” he said confidently. “They’re talking about ‘Who’s Usman going to fight next? Should Usman go up to ’85?’ Naw, because there is another ’70-pounder that he hasn’t beaten yet and I’m going to show that I’m the guy in the division that deserves a title shot.”

Four weeks ago, Belal Muhammad was a talented, but unheralded, welterweight hoping to be this year’s version of Angela Hill, Kevin Holland, or Khamzat Chimaev.

Now, he’s filling in for Chimaev and a win away from title contention.

I think it’s safe to say his plan has worked out pretty well.