At 43, Hunt doesn't know when it will end, he still loves fighting

If Mark Hunt’s fight with Derrick Lewis this weekend at Spark Arena in Auckland, New Zealand were the backdrop for a Hollywood movie, this would be the opening scene:

A veteran fighter sits in the locker room; head down, hands taped, gloves on. The sound from the television broadcast cuts in as an excited announcer sets the stage for the evening’s main event.

He talks about the local star – old, even by heavyweight standards – returning to compete at home one more time, looking to rebound from a devastating loss in a dangerous matchup with a surging finisher who has defeated his last six opponents, all but one of them succumbing to his clubbing power.

He wonders if this will be the end of the line for the local star? If after more than 15 years and upwards of 50 fights, this is a chance to call it a career in front of friends, family and an adoring crowd. 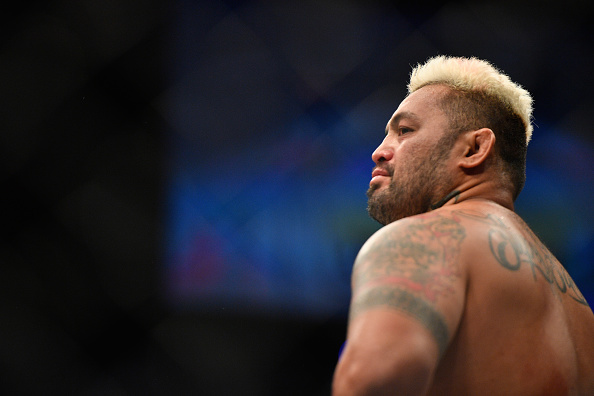 The sound of the chanting crowd begins to drown out the television. They’re summoning the local star, calling his name over and over, louder and louder.

Finally, he rises and begins his march into the raucous arena, onward into battle one more time.

Those details – the age, the recent knockout loss to Alistair Overeem, the dangerous opponent, and the retirement question – are pieces of the story that make this weekend’s heavyweight main event so compelling. They’re also details Hunt has thought about as he prepares to share the Octagon with Lewis this weekend.

On the eve of his 15th UFC appearance, the veteran knockout artist is happy to reflect on the moment at hand and ponder the pertinent questions, but if you’re looking for concrete answers about what the future holds for Hunt, you’re not going to find them.

“I think this might be my last contract; I don’t know,” says Hunt, his opening thoughts on a subject that has many layers, all of which he’s considered and is still juggling. “I’m still competing with the best fighters in the world, still doing okay and I don’t feel I should hang it up because of my age.

“This might be one of my last fights in New Zealand. It might be my last fight. At the end of the day, I’m not going to let anyone tell me it’s my time to go; I’ll leave on my terms and when I’m ready.

“There is no feeling like fighting,” he adds, his low growl filling with excitement. “The ups and the downs – the mind strain, the body strain. Those physical and mental strains of fighting, nothing comes close to it because it’s pretty raw. I still love fighting.”

Despite his love of competing inside the cage, fighting has never been about wins and losses for the 43-year-old Hunt, who is quick to make jokes about his age and just how long he’s been earning a living tossing around the powder kegs at the end of his arms.

For the self-described “old dog,” competing on the biggest stage in the sport is a way to show people that no matter the hand you’re dealt, you have the ability to change your circumstances.

“I’ve already proven it,” says Hunt, who shared the often difficult to read details of his life in his autobiography, Born to Fight. “It doesn’t matter what kind of cards you been dealt by God – you still can change.

“If you want things to change, you have to go work for it and I’ve done that myself, so it’s already been proven. You can do it yourself; all the boys and girls can do it. It might not be fighting – it might be something else – but you just have to find it. Whatever gift you have, find it and then use it.

“I think that’s pretty awesome,” he says of being a role model and example that change is possible. “It makes a lot of sense for me and makes everything worthwhile. It’s never about the money – it’s about helping and giving back and it’s great for me to be able to do that because that’s what’s most important to me.”

And having that greater focus, that greater mission allows Hunt to enter the Octagon free of pressure, even this weekend when he returns to the place he was born to compete in front of a partisan crowd in Auckland.

“It’s funny because fighting back where I was born, there is no pressure for me. Honestly – that’s just hyping,” he offers. “I feel blessed to still be doing it at my age and, win or lose, as long as I give the best performance I can on the night, I should be proud and happy; it doesn’t matter which way it goes.

“Making a change in the world for the better is always positive – I’m turning negatives into positives and trying to help others along the way.”